MMHE has financial muscle and resilience

(MMHE) could be a short-term setback for the company as its net cash position will enable it to ride out the current down market.

MMHE was in the red for the first quarter ended March 31,2021 (Q1’21) mainly due to losses at its marine and heavy engineering operations, which were affected by the movement control order (MCO) 2.0 and seasonal weakness.

Its headline net loss of RM104mil in Q1’21 consisted mainly of the RM68mil provision for an ongoing engineering, procurement, construction, installation and commissioning heavy engineering project that is currently undergoing commissioning offshore.

Excluding that, Maybank IB Research pointed out that the company’s core net loss came in at RM38mil.

The loss was mainly due to lower repair activities at the marine operations (67% year-on-year) due to higher charter rates offered for shipments during the prolonged winter period as well asZslippage in working schedule due to MCO 2.0.

However, Maybank IB continued to see value in the company.

It noted that MMHE was among a select few oil and gas companies that have the financial muscle and resilience to ride through this downcycle. It remains in net cash and trades at an undemanding 0.4 times net tangible assets.

“Financially, its operating cash flow remained positive (RM3mil) in the quarter while its net cash level was relatively stable at RM396mil or 25 sen per share. This, in our view, is testament to its sound financial management in an oil or Covid-19 crisis.

The research house kept its “buy” call on the ock with an unchanged target price of 85 sen based on 0.8 times enterprise value/order backlog (mean valuation) expectation of RM1.2bil.

Nonetheless, Maybank IB cut its 2021 earnings forecast by 96% to factor in the company’s weak Q1’21 performance via a lower earnings before interest, tax, depreciation and amortisation margin.

Earnings estimates for 2022-2023 were, however, kept unchanged as it expects orders to grow this financial year.

“Our model imputes a RM1.4bil new order intake in 2021, on the back of a RM8bil tender pipeline.

“MMHE has recently secured the RM1bil Jerun engineering, procurement, construction, installation and commissioning project and is in the running for several interesting prospects.

“Among others, we do not rule out the Limbayong floating production storage and offloading job in the second half of 2021, ” Maybank IB said. 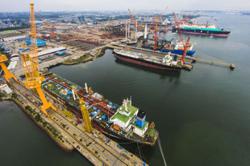