Malaysian economy and business - not all doom and gloom 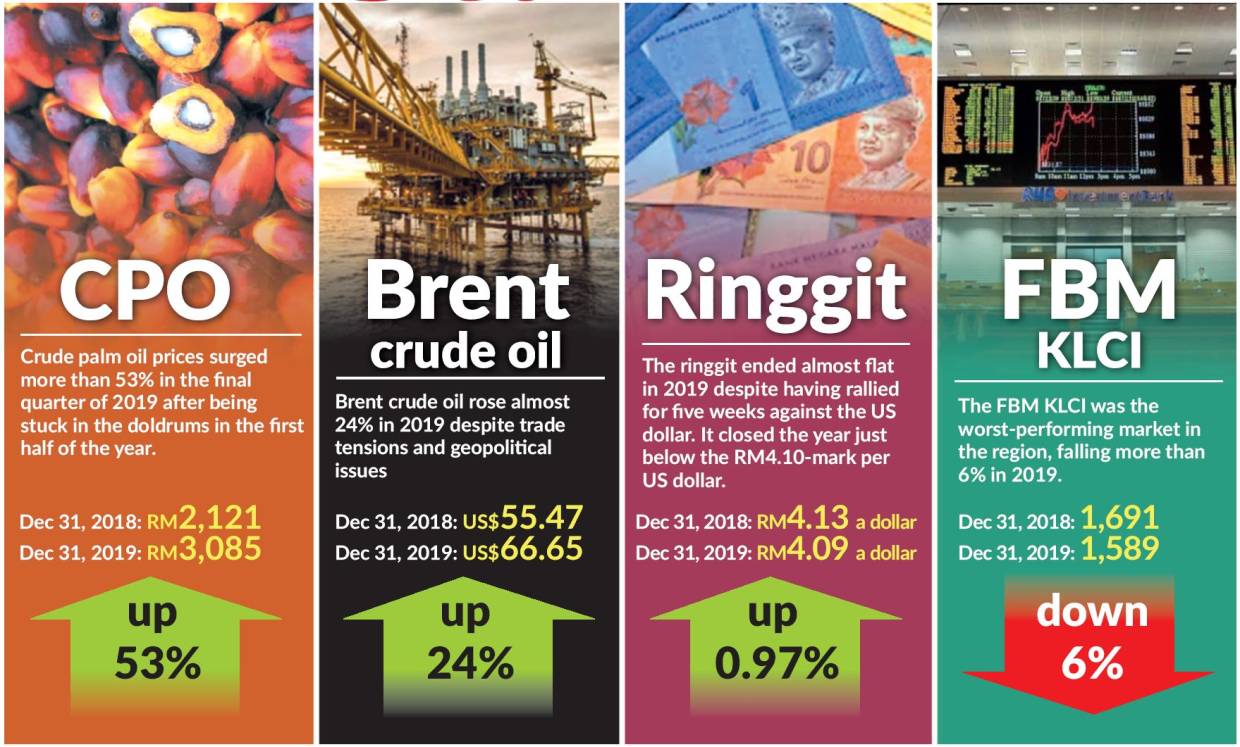 PETALING JAYA: Despite the angst of trade wars and slower global economic growth, 2019 has been a good year for many markets around the world, except for the Malaysian equity market.

Having shed 6% through 2019, the local benchmark FBM KL Composite Index (KLCI) – which is made up of the 30 largest stocks on Bursa Malaysia based on market capitalisation – was the worst-performing index in the region.

This is despite crude oil prices jumping almost 25% for the first time since 2009, which have driven oil-based countries such as Russia to score the best-performing stock market, with a 40% increase in 2019.

It is worth noting that Wall Street and MSCI’s near 50-country world index have both recorded 30% and 24% jumps, respectively.

So what gives? External issues aside, disappointing corporate earnings in 2019 and the uncertainty of the longstanding transition for the prime minister position have caused a drag to the local stock market, said a fund manager.

“Since the beginning of 2019, analysts have been reducing their earnings forecasts following disappointing quarterly corporate earnings performance, ” the fund manager said.

Nonetheless, for 2020, analysts consensus and MIDF are expecting about 6.5% and 5% jump in corporate earnings thanks to a low-base effect.

Rakuten Trade Sdn Bhd vice-president of research Vincent Lau pointed out the local big capitalisation companies have been lagging behind their smaller companies in the local stock market for 2019.

“Our market is not all doom and gloom, the technology sector, which doesn’t feature among the FBM KLCI’s 30 counters had done relatively well.

“Other sectors such as plantation, small capitalisation companies and the ACE market have started picking up. The trend is expected to continue as the government starts to roll out the major infrastructure projects, ” he told StarBiz when contacted.

He said that the big capitalisation companies could regain favour and take the lead in 2020.

“KLCI and big caps would eventually catch up on any positive catalyst news will see it move as all the negatives are priced in and foreign funds have been underweight, ” Lau said.

Meanwhile, MIDF head of research Mohd Redza Abdul Rahman told StarBiz that the FBM KLCI was one of the best-performing markets in 2018 when regional markets were down.

“If we are to look at the performance on Asian indices over a two-year period (2018-2019), their performance has been pretty much on par with ours, ” he said.

He said the decline of the FBM KLCI in 2019 was mainly led by heavily weighted sectors such as banks and industrial products.

“But sectors such as construction, energy, and plantations have really stood up with gains seen in the year 2019, ” Redza said.

On the US market, he said that the record highs in U.S. stocks may not be sustainable due to the prolonged trade war tension with China.

Notably, the dispute has been stretched for nearly 18 months, which saw the US and China imposing tariffs on hundreds of billions of dollars worth of one another’s goods.

“We are worried that this trend in US stocks might not live long, considering only little change seen on the US-China trade war. There has been no toll back of tariffs on either side, ” Redza said.

In commodities, crude oil prices had gone up almost 25% this year, while the crude palm oil price (CPO) had rallied more than 53% this year. Despite that, the FBM KLCI ended the year lower.

Meanwhile, the ringgit rallied in the last five-week of 2019 against the greenback bringing the exchange rate just below the RM4.10-mark per US dollar.

While undemanding stock prices and the recent rally in the commodity prices as well as the weak ringgit could see the FBM KLCI finally play catch up to its regional peers in 2020, the road ahead might still be bumpy on a combination of local and external factors.