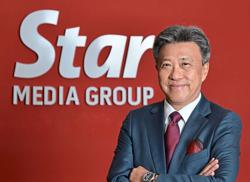 IT could all have turned out very differently, if not for life dealing him a different hand of cards at the most crucial moment.

Somehow, in a twist of fate, Datuk Seri Wong Chun Wai found himself in a profession he never imagined being in.

“I wanted to be a lawyer but I knew my grades wouldn’t get me a place in a local university, given the limited seats for non-bumiputra candidates. Besides, among the five public universities back then, only UM (Universiti Malaya) had a law faculty,” says Wong, Star Media Group Bhd

After more than three decades in the same company, Wong will step down as MD/ CEO on Jan 1 and will take up a new post – as group advisor – on the same day. He will oversee content matters as well as government and corporate relations. Wong’s term as the group’s top dog actually ends in 2020 but he chose an earlier retirement from the post.

Looking back, Wong’s initial desire to become a lawyer was driven by his planned entry into politics, but in hindsight, he is glad life took the course it did.

“I would have failed desperately. I can’t speak Mandarin and I don’t have the killer instinct required of true politicians,” says the former St. Xavier’s Institution student with a laugh, recalling how misguided judgment could have put him in a quandary.

While mothers know best, fathers know a lot too, so when Wong’s dad ignored his wish to read law in London, the writing was on the wall. And being a filial son, a young Wong respected his father’s non-response as the end of the discussion.

Change happened early for him, in which a degree in political science from UKM launched a career in journalism.

“Liow Tiong Lai, who went on to become MCA president, was my university mate.”

Just like how it must be for his younger and new colleagues, Wong likewise arrived at The Star’s doorstep bright-eyed and bushy-tailed back in 1984, pocketing a “grand” sum of RM300 a month. While he was cutting his teeth on his craft came the company’s darkest hour in 1987, The Star was suspended and had its printing permit revoked following Ops Lalang.

“Along with my colleagues, I was out of work for five months.”

Rising through the ranks

Through his time serving a single employer since graduating from university, the 57-year-old proud Penangite has lived the highs of witnessing history unfold from a ringside seat.

In 2003, he wrote an exposé about Malaysian terrorists undergoing arms training in Afghanistan, winning the Best Journalist Award for English media when terrorism was still far from a fashionable word.

He became the first Malaysian editor to be elected to the Paris-based World Editors Forum in 2012, the very year he was also picked to head Bangkok-based Asia News Network.

Other feathers in his cap include being conferred the lifetime achievement award at the World Chinese Economic Forum for his contributions to the media industry in 2015.

In the same year, Wong was appointed an adjunct professor at Universiti Utara Malaysia’s School of Business and the first industry leader at the faculty of Social Sciences and Humanities at UKM.Wong’s legacy will largely be his political writings, especially in his hugely popular “On The Beat” column every Sunday, but a new travel column, “Off The Beat”, appearing Saturdays in the Star2 section, is showing him in different light.

“I have been doing a bit of travelling and I intend to do more. But I am more an explorer now than the conventional tourist.”

Be it a brave adventurer or intrepid journalist, Wong’s nose for news will guide him to where his heart beats – right in the thick of the action.