WITH the oil and gas (O&G) sector being one of the crucial sectors for the Malaysian economy and stock market, the downward spiral of oil prices in the last four months have left many jittery.

Sure, many were already aware of the steady build-up of oil supply in North America and the softening demand in Europe and Asia. Then there were also geopolitical tensions in the Middle East.

While oil prices had been slowly nudging downward throughout the year, the sudden almost 30% drop in the last few weeks caught many by surprise.

On Oct 1, Saudi Arabia lowered prices on its crude exports to Asia. This move signalled that the world’s largest exporter was looking to defend its market share rather than buttress prices. and UMW Oil & Gas Bhd have not been spared. Along with the tumbling financial markets, they are now down 16.7%, 20% and 16.2% respectively in the last one month.

Is this just herd mentality at play, or something more fundamental taking shape?

CIMB Research in its report, Implications of Lower Oil Prices, says oil majors typically cut back on exploration and production activities when oil prices are low.

“Oil prices should have a laggard impact on oil service companies but we have observed that global offshore orders and oil prices have moved in lockstep. We also expect drillship and rig orders to slow further due to lower offshore activity,” it says.

However, CIMB Research points out that the exception would be Malaysia, where it expects Petronas spending to continue flowing to O&G and related sectors, namely refiners, as well as O&G service companies.

“Lastly, the shale gas revolution (one of the reasons for the decline in oil prices) is positive for liquefied natural gas, liquid petroleum gas and ethane shipping products. This translates into stronger order prospects for gas carriers and product and chemical tankers,” it says.

In Malaysia, Petronas chairman Tan Sri Shamsul Azhar Abbas had predicted that costs were on the rise, as exploration and production efforts grew more complex.

In a recent tender exercise, Shamsul said rates for offshore supply vessels (OSVs) had tumbled 30%, which he said was a “good thing”, as the market for offshore services had been overheating for “far too long”.

Nonetheless, Petronas is expected to continue with its existing operating expenditure.

This increase in production will require more services, from human resources to offshore service vessels.

Despite the gloomy outlook, an O&G industry executive opines that oil prices will go up again.

“When it comes to oil, it’s all about money politics. Who are the main players in the game? Saudi Arabia, the United States, Canada, China and Iran. Maybe the US needs to weaken Russia now. Low oil prices will definitely hurt Russia, as half of its budget money comes from O&G exports,” he says.

He adds that oil prices would likely inch up toward year-end.

“Winter is coming in the US. Through experience, especially if the winters are particularly cold, oil prices will nudge up,” he says.

The Malaysian O&G sector is led by its poster boy, SapuraKencana Petroleum Bhd, which is the largest listed player in the field.

SapuraKencana has seen a 15.8% drop or RM3.4bil wiped out from its market capitalisation since five weeks ago, when oil prices began to fall.

Nonetheless even at this level, not one analyst has downgraded their call, and out of the 21 local and foreign analysts covering the stock, 20 continue to have a buy recommendation with a consensus 12-month target price of RM4.76.

The consensus estimate is for SapuraKencana to deliver earnings of RM1.44bil for FY15 and RM1.69bil for FY16.

At RM3.41, SapuraKencana now has a market capitalisation of RM20.7bil and is trading at a price earnings ratio of 13.44 times. 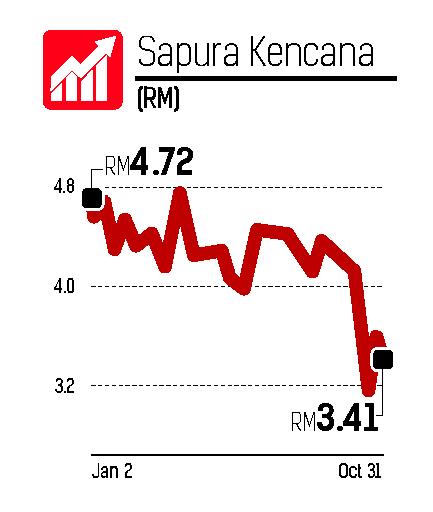 It has a large order book at some RM26.8bil, easily the biggest among Malaysian oil and gas service providers.

In fact, since the beginning of 2014, the group has secured RM6.5bil in new contract awards, of which AmResearch points out that 73% stems from tender rig charters.

SapuraKencana’s president and group chief executive officer Tan Sri Shahril Shamsuddin points out that the oil price scenario today depicts a short-term uncertainty of supply-demand, a cycle that has happened in the past although at that time due to different circumstance.

“The oil price today is a reflection of short-term supply and demand imbalances due to various macro and micro forces. If you recall, we have seen similar situation in 2009 and before that in 2001. What differs is the circumstances for such short-term imbalances, (today) is largely contributed by excess of supply and oil companies’ reaction against capital discipline measures,” he says.

Shahril further highlights that as a company, it is critical to understand the forces behind these short-term shocks in order to remain resilient through the down-cycles and be able to capitalise on opportunities that will emerge.

“Over the medium to long-term, oil prices will need to reflect the true cost of production in meeting global demand. We are confident that a large part of the demand will continue to be met from traditional sources of oil and gas and as such will require companies such as SapuraKencana to continue to invest in capabilities and assets for more complex and challenging oilfield solutions.”

When asked whether charter rates for SapuraKencana would come down, Shahril says its contract rates have already been fixed in the respective contracts.

“The business plan remains intact. Our fundamentals remain strong. SapuraKencana’s revenues are derived from secured long-term contracts which provide clear visibility to earnings over the course of the next few years,” he says.

Shahril explains that much of SapuraKencana’s revenues from its suite of services are derived from development and production activities, not from exploration.

“Once the development plans have been set in motion and capital expenditure spent, it is not possible to cut short or abandon a project halfway just because oil prices fall.

“It takes 2 to 3 years to develop an oilfield. Once capital has been sunk, the project economics will only deteriorate if these projects are delayed or put on hold. As such, committed projects and signed contracts must continue in order to preserve investment returns,” he says.

Companies take a long-term investment outlook when developing oilfields (due to the long-term nature of production).

Shahril says the profile of any given oilfield project typically has embedded risk-mitigating strategies that would ensure these projects can continue under short-term shocks in the industry.

A Credit Suisse analyst suspects the heavy selling seen in SapuraKencana is partly due to some syariah funds exiting before the removal of the stock from the compliant list in November.

“SapuraKencana’s tender rig business demonstrated resilience during oil price volatility during the Global Financial Crisis. Offshore construction and subsea services (OCSS) earnings are protected by its economic moat, high-spec assets and long-term contracts for ten out of 12 pipelaying vessels. The only true weak spot is fabrication, but this provides a very small portion of earnings,” says the Credit Suisse analyst.

In terms of businesses, OCSS is the biggest contributor with 62%, followed by drilling (19%), energy and joint ventures (10%) and fabrication, hook-up & commissioning (9%).

On the other hand, the earnings growth promised by its incoming Petrobras-chartered pipe-laying support vessels and the signing of gas sales agreements with Petronas becomes more definite over time.