Will the HSR be value for money?

THE high-speed rail (HSR) is a mega project that not only symbolises the warming of ties between Malaysia and Singapore, but also the increased economic linkages between the two countries.

Iskandar Malaysia has been a magnet of sorts for Singaporeans and more investments are flowing in from Singapore into Malaysia.

Both Governments have basically given the green light for the HSR project to proceed and tenders are expected to be called next year as studies are ongoing on the finer details of the project.

But as momentum grows towards the construction of a HSR link between both countries, there is growing scepticism whether the project, which is estimated to cost RM40bil, will actually be money well spent.

There is anxiety that once built, the HSR will benefit Singapore more than Malaysia as the link will serve as another channel for Malaysian talent to migrate to higher paying jobs in the south.

That leads to the cost-benefit aspects of the project, as some feel that the existing train infrastructure under KTM Bhd needs to be upgraded to ensure that the country gains from a railway infrastructure instead of enriching its neighbour and economic competitor.

“The priority should be to keep economic value within the country and efforts should be made to create one-hour economic zones in Ipoh, Malacca and Kuantan after the mass rapid transit (MRT) is built rather than surrender the hinterland to Singapore,” says one analyst.

Land Public Transport Commission (SPAD) chief executive Mohamad Nur Ismal Kamal points out that the HSR does not focus on the aspect of swift mobility of people alone, and that the project is meant to benefit both countries.

As the rail link will integrate the population of both countries to give enough heft towards creating a sizable mass that can attract foreign investments, Mohamad Nur feels that creating linkages between two large population centres will propel Kuala Lumpur and Singapore into the realm of mega-cities.

The HSR will also open new growth avenues, create value-added industries and services along the stops of the railway line that can spur greater economic activities in Malaysia.

Citing examples of HSR lines around the globe, he says they have been successful in creating high value economic developments and some of them have flourished tremendously into mega-cities with population exceeding 10 million people earning high-income per capita.

With a RM40bil price tag, there will be doubts as to whether the benefits of the HSR are well worth the cost.

For one, it’s projected that airlines will be affected the most once the HSR is built as the cost of travel between Singapore and Malaysia will be benchmarked against the cost of a budget airline ticket.

With immigration clearance of both countries slotted to be located at both the entry and termination points along the line, the travel time is expected to be within 90 minutes point-to-point making it faster and cheaper to travel by rail rather than by air.

The other concern is the termination point in Singapore. Should the HSR terminate at Tuas West or Jurong East instead of the city centre, then the travel time on Singapore’s MRT will negate the benefit of having the HSR as passengers have to alight far from the city centre and take a connecting train or other modes of travel to head to the central business district of Singapore.

“It is more feasible to improve KTMB services and have extensive links that are a one-hour radius from the Klang Valley,” says one detractor of the project.

Improving domestic connectivity to cities such as Kuantan, Ipoh and Malacca will also have a tremendous spillover effects on the local economy just as the North South Expressway (NSE).

The economy grew tremendously as the expressway opened new growth areas along its route, and once the MRT system in the Klang Valley is completed, the impact of an efficient rail service within an hour’s travel time from Kuala Lumpur will lift economic activity dramatically.

“Malaysia should spend RM40bil to improve the MRT and economic growth centres nearby,” says the analyst.

“The priority should be to spend money on the MRT and create a one-hour lifestyle growth region with nearby cities that can integrate with Greater KL just like what China has done with Shanghai.”

Alliance Research chief economist Manokaran Mottain raises concerns about the impact of the HSR cost on the country’s current account surplus that has been narrowing since few years ago.

“Our account surplus has been shrinking even nearing negative at a point due to the Government’s aggressive spending on Economic Transformation Programme as well as oil and gas projects and I foresee further strain due to the HSR.

“This is because I expect that the HSR project would be an import-intensive development inclusive of the rolling stocks. Dwindling current account will impact the currency and ultimately our ratings as well,” he says.

He adds that the Government can alleviate this pressure on the current account by stretching the project over a longer period of time. On the flip side, Manokaran doesn’t deny the fact that the HSR will open up new business opportunities and make travelling easier especially for businessmen.

The backers of the project feel that the HSR will be a game changer for both Kuala Lumpur and Singapore as it will improve connectivity between two localities that have a population of six million and about five million respectively.

“The best example is Japan where the bullet train lines between Tokyo-Yokohama-Chiba have benefited all three key points of embarkation and departure. Tokyo is a mega-city and Yokohama has become the biggest bio-tech cluster in the country.

“Another example is the London-Paris HSR that has been the catalyst for strong growth in employment and inhabitants in Lille. 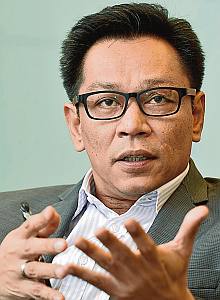 Mohamad Nur: ‘We need to look at this HSR project as a coupling between two capitals that have their differences in the past but now we are talking about a shared future where the HSR is poised to be the game changer.’

“But we must have clear policies and development plans to make this a reality,” Mohamad Nur says.

But the bigger plan is for it to benefit more than just Kuala Lumpur and Singapore.

Seremban, Ayer Keroh, Batu Pahat, Muar and Nusajaya will gain as the travelling time between these towns will be shortened and this will draw investments into those areas.

And for the clusters along the line, SPAD has already earmarked niche development plans for each key stop.

“This is where active planning and policies have to be in place to attract high-value investment and to take advantage of the natural industries that are already there.

“For example, Nusajaya has universities and research centres, so this could be the nucleus for directions in policies,” he says adding that Government may set up a separate entity to oversee the development of specific areas located along the HSR.

He explains that the creation of these high value economic clusters in Malaysia along the HSR line will also retain and attract talents into the country.

“Singapore is a top destination in the region for Mice (meetings, incentives, conventions and exhibitions) and tourism. They are potential markets that has not been fully-tapped.

“We need to look at this HSR project as a coupling between two capitals that have their differences in the past but now we are talking about a shared future where the HSR is poised to be the game changer,” he says.

The HSR is one of the 10 National Key Economic Areas aimed to transform Malaysia into a high-income economy with gross national income (GNI) of over RM1.7 trillion and to raise GNI per capita to RM48,000 in 2020.

As for the structures of development of the HSR, although SPAD has reportedly short-listed two options, public-private partnership (PPP) and private finance initiative, Mohamad Nur says not many HSR projects are as successful as the PPP model.

“If you check the successful HSR model that could render world-class services while providing the impetus for economic benefits, the Government must take the proactive effort to fully fund or bear a big chunk of the costs.

“In reality some private companies could go overboard when projecting ridership and at the end of the day the fares are not enough to support the operations.

“At the point of conception of any rail project, if one looks at it as a business to make a huge profit, it will be a major disappointment,” he says.

Having a HSR is not enough to improve the economy and Mohamad Nur says SPAD is working on improving stage bus services along the HSR stops.

Firstly, it is about taking over the private bus assets of the operators in Kuala Lumpur and allowing them to operate on a gross cost basis rather than an entrepreneur model. The operators will be given a key performance indicator and be profitable. They will have to adhere to the conditions stipulated by SPAD.

By doing this, SPAD will have better control on the service level of stage buses and the maintenance of these assets can also be standardised.

The bus service in stops along the HSR line will also be beefed up for people to be ferried to and from the stops to improve the effectiveness of the rail service.

On the sustainability of HSR operations, Mohamad Nur points out that the fares must be flexible to ensure that the trains are at least 50% full during non-peak hours.

“There is no point if during peak hours the trains are full to the brim but empty during non-peak hours,” he says.

This is also an issue of whether the fares will be economical for the passengers who commute to work on a daily basis.

Mohamad Nur says companies are encourage to subsidise the fares especially high-value talents as a form of employee benefit.

But the other factor in the HSR’s favour, according to Mohamad Nur, is the lengthening of the NSE lifespan.

The NSE is already getting congested and studies have shown that if there is no improvement in the mode of transportation between Kuala Lumpur and Singapore by 2030 given the growth in car ownership and usage, a new highway would need to be constructed. That project will be a costly endeavour.

Bringing KTMB up to speed