He invented karaoke, saw it take off, then walked away – Daisuke Inoue taught the world to sing, if not always in harmony

The man who helped teach the world to sing – although not always in perfect harmony – could have earned US$100 million in royalties last year alone, but he is not bitter about missing out on the money.

Daisuke Inoue, the inventor of karaoke, shrugs when asked if he regrets not taking out a patent on his creation, which today is ubiquitous around the world.

“At the time, I thought that patents were only for unbelievable inventions that produced something from nothing,” he tells the Post, ahead of his invention’s 50th anniversary next year. “The first karaoke machine just brought together some electronic components that already existed, so I never thought it was an ‘invention’.”

While the money might have come in handy when he was younger, Inoue says it is quite possible that karaoke would never have become the global phenomenon it is today if the first Juke 8 had been patented. And, he adds, patenting it would have missed the point. 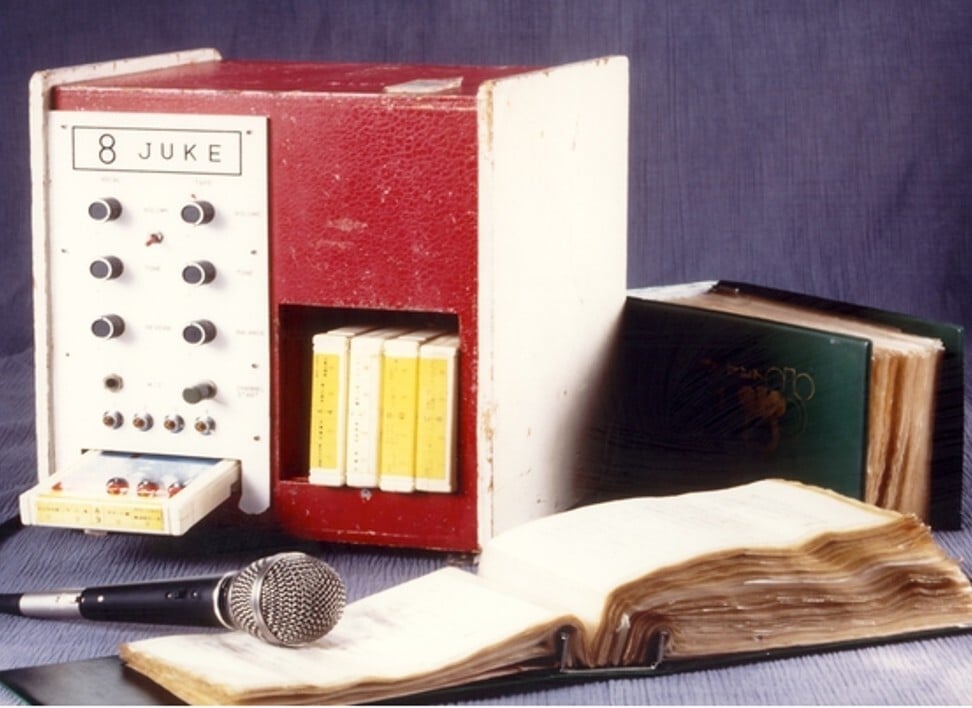 “The desire to sing is common to a majority of people, I believe, and karaoke gave them the opportunity to feel like a star,” he says. “And when I see someone singing, that’s what I think of.”

Now 80 years old and living in Nishinomiya, to the west of the Japanese city of Osaka, with his wife, daughter, three grandchildren and seven dogs, Inoue has time to reminisce about a simple idea that revolutionised popular culture.

Inoue was born in the summer of 1940 in Juso, part of the sprawl that is Osaka. His father owned a small pool hall and, at the age of three, Inoue fell from the second storey of the building and was unconscious for two weeks. Doctors told his parents that, even if he lived, Inoue would almost certainly have brain damage.

A Buddhist priest was summoned to bless the comatose child and, as part of the ceremony, changed his first name, Yusuke, to Daisuke, with the two characters he chose meaning “big” and “help”. Against the odds, Inoue survived and had no lasting effects from his brush with death.

Then Osaka became a target for American bombers in the latter stages of World War II and the family moved to the rural town of Ikoma. The pool hall Inoue’s father operated was destroyed and, when the family moved back to Osaka in 1946, he barely made a living selling sweets on a blanket laid out on the street. Yet within a few years, he had saved up enough to open a restaurant serving okonomiyaki – savoury pizzas. 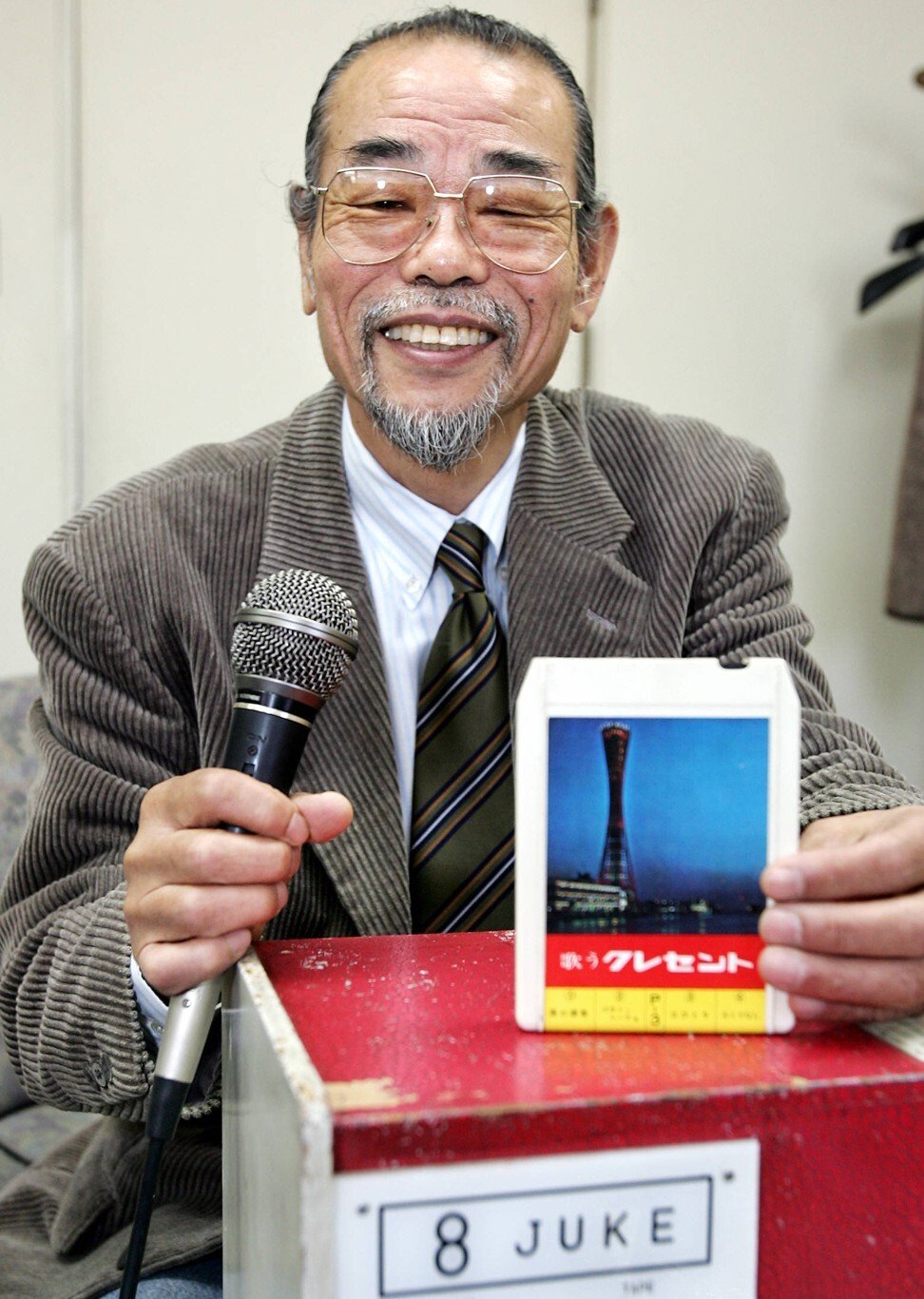 Inoue had no intention of going into the business and soon developed an interest in music. In his first few weeks at junior high school, he talked the brass band into letting him play the drum, even though he had never learned to read sheet music. He admits he still cannot read music and learned the tunes through sheer repetition.

In high school, a girl heard him practising the drum and mentioned that her brother was looking for a drummer for his band, which played at local dance halls. Inoue quickly taught himself some dance numbers – primarily waltz and mambo tunes – and got the gig.

With part-time jobs banned by Japanese schools, Inoue had to keep his evening employment quiet. He slept through a lot of classes, he says, but never missed a day of school and still graduated.

A career as a “salaryman” for a securities company lasted only eight months before he told his parents he was leaving home to go on the road with his band. Inoue says he was surprised when his father raised no objections and wished him luck.

He had a great time for nine years, Inoue says, but partying and playing every night left him virtually penniless. And while he also knew he was a solid drummer, he realised he was never going to be great.

So he returned home at the age of 28 and started playing in drinking dives in and around Kobe, on keyboards, and performing tunes for audiences who liked to get up and sing along. 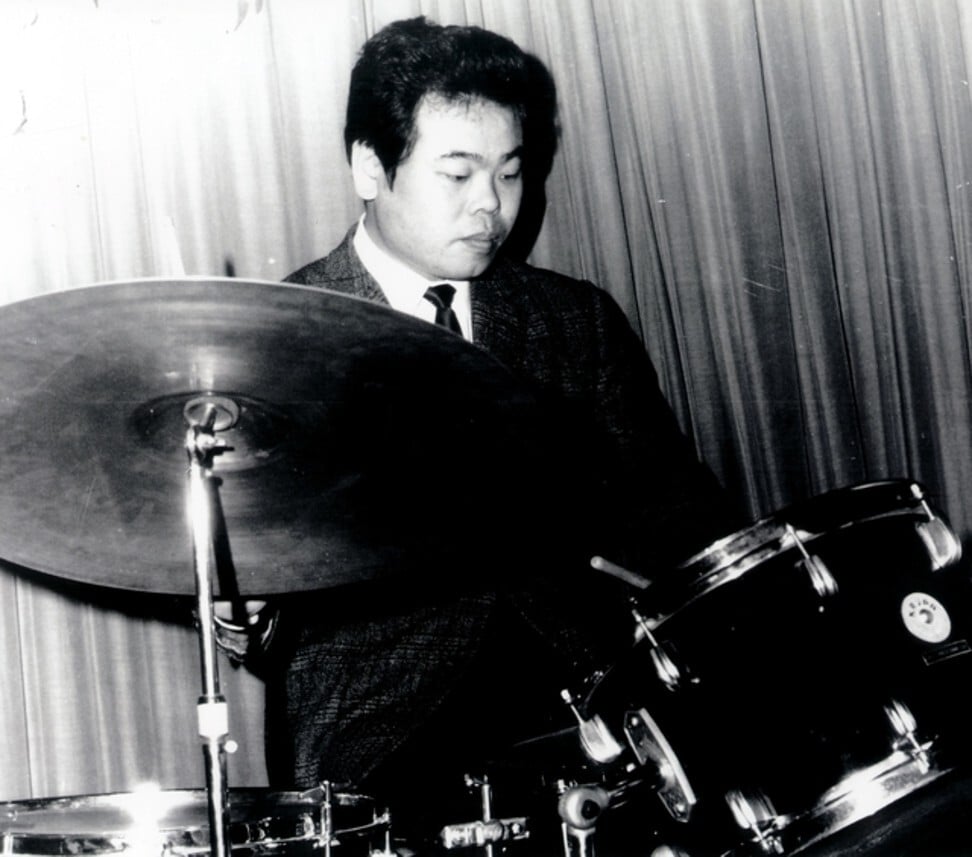 One day, Inoue told Topic magazine in 2005, he was approached by the president of a small company who asked him to be at a club where he would be entertaining clients the following week and feared he would be called upon to sing.

The man asked Inoue to tape a few of his favourite songs, practised them to perfection, and the businessman came off as an accomplished warbler. Little did he know that he had given Inoue the idea for his creation.

The idea was simple; put coins into a machine hooked up to a microphone, a speaker and an amplifier, and it would play the songs people wanted to sing. A friend had an electronics shop and was able to combine all the elements, and two months later – at a cost of US$425 – the first Juke 8 was ready.

Inoue’s band then set about recording the music to go on the devices and gradually built up a catalogue of 300 songs.

From the next day, customers refused to give up the microphone
Daisuke Inoue on his first karaoke machine

“I sang my first karaoke song in 1969,” Inoue told Topic. “At the time, I never imagined it would be of interest to anyone other than myself, but the machine hit the market in 1971.

“If I had not been in Kobe, it might not have caught on like it did. In Tokyo and Osaka, people listened to live music or jukeboxes from the US. But in Kobe, people drank and sang to live music; a full band, guitar or keyboard.”

Confident of his creation, Inoue convinced the owners of 10 bars to put a Juke 8 on the counter, but when he returned a week later, the owners said the machines had been barely used. Undeterred, Inoue sent one of his most attractive female employees to the bars and got her to sing a couple of songs on the Juke 8.

The ploy worked; punters could not wait to get their hands on the microphone. “From the next day, customers refused to give up the microphone,” Inoue tells the Post. By the end of the year, more than 200 drinking establishments across Kobe were equipped with the first generation of karaoke machines. 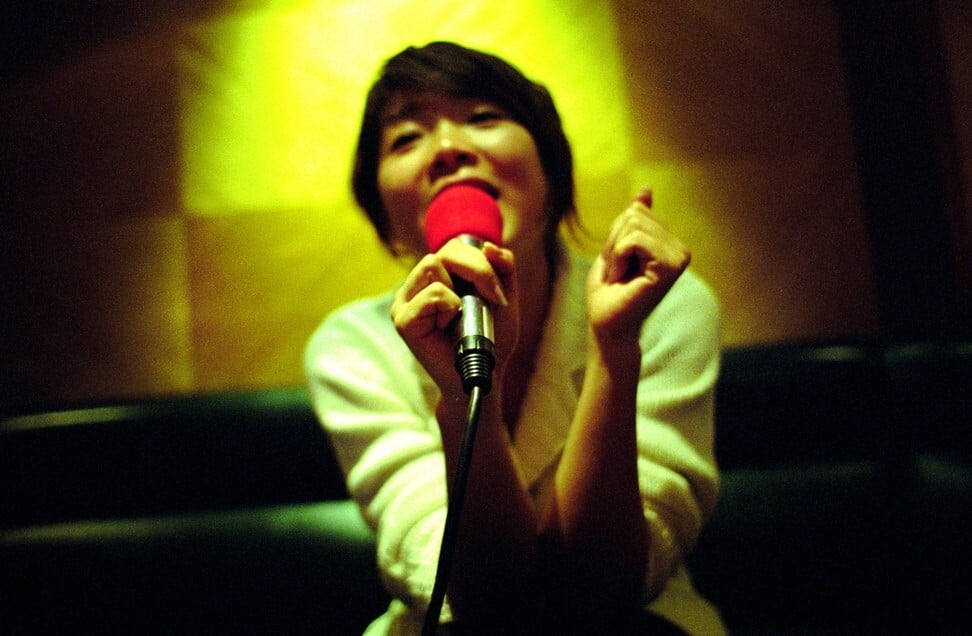 His big breakthrough came when two Kobe club owners opened new outlets in Osaka, and within a year the Juke 8 was in demand across the country. In a year, his company made 25,000 units and all of Japan had been gripped by the karaoke craze.

Inoue says he also cannot take the credit for the name of this new phenomenon. In 1952, a famous Osaka theatrical troupe known as Takarazuka Kageki was thrown into crisis when its orchestra went on strike. The show had to go on and the troupe’s owner would not bow to the musicians’ demands. So the company commissioned an electronics firm to create a machine that would play the music the actors required.

According to legend, an engineer from the electronics firm visited the venue and remarked: “The music is playing but the orchestra pit is empty.” The phrase “empty orchestra” in Japanese is kara okesutura, which was abbreviated to karaoke. 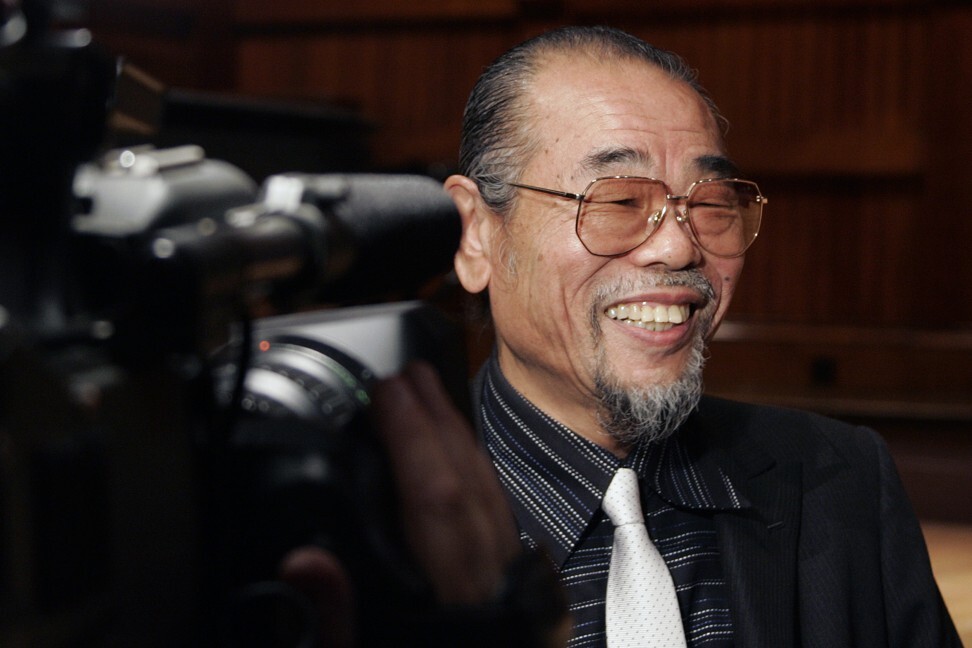 Inoue managed to convince some of the biggest record labels that their bands needed to be a part of the revolution, and others swiftly came around when they realised how much they would rake in from royalties each time a song was sung. Today, he points out, every label wants their band on karaoke machines.

Within a couple of years, Inoue’s company was recording an annual US$100 million in sales; he says he just sat back, did nothing and watched his bank balance get fatter. Instead of revelling in his new-found wealth, however, Inoue became depressed because he was no longer getting out and meeting people. So he handed control of the company over to his brother and walked away.

He credits his dog, Donbei, with bringing him out of a funk that lasted a couple of years, and hopes to this day that his invention has helped bring joy to other people who have struggled with depression – that wielding a microphone, no matter their singing abilities, has given them a way out of the daily grind. 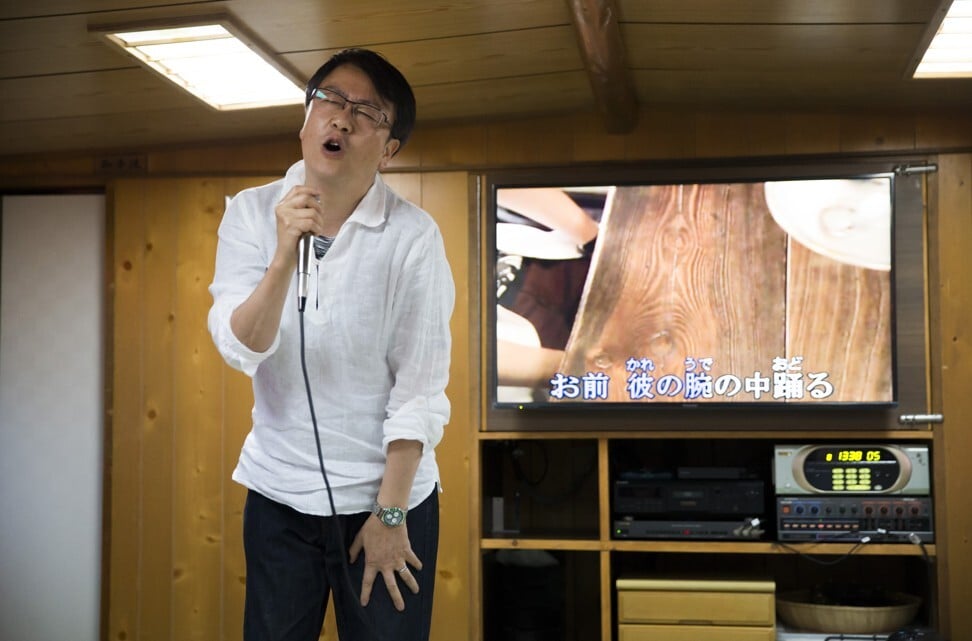 When he was ready to do something again, one of the first things Inoue did was buy a defunct golf course in Hyogo prefecture, where he built the first nursing home for elderly dogs, complete with a dog training centre.

“I want Nishinomiya city or Hyogo prefecture to become the first part of Japan where no stray or unwanted dogs are put to sleep every year,” he said at the time. “This is how I will repay Donbei for curing me of my depression.”

In 1999, Time magazine named Inoue among the top 20 Asians of the 20th century – an accolade that put him alongside Mahatma Gandhi. Inoue admits he was overwhelmed.

Five years later, he was invited to Harvard University to accept the Ig Nobel Prize for “inventing karaoke, thereby providing an entirely new way for people to learn to tolerate each other”. 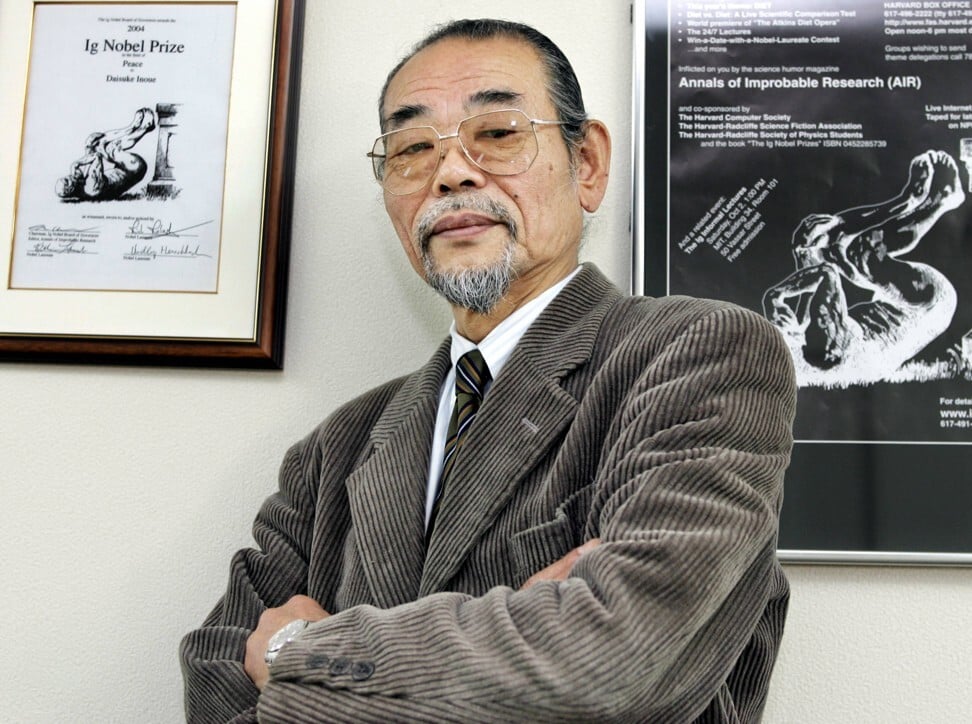 On the stage to give his acceptance speech, Inoue suddenly went blank when he was meant to cite a song, so he pulled a small tape recorder from his pocket, listened to the first few seconds, and recalled the words.

“I’d like to teach the world to sing, in perfect harmony ...” On cue, the audience joined in to complete the song and he was given the longest standing ovation in the history of the Ig Nobel awards.

Did you know that among the world's top five health care markets, China is the only one growing at double digits? Get a comprehensive industry review and insights on Covid-19 induced market shifts with the China Healthcare Report, brought to you by SCMP Research. Sign up for our 50% early bird discount now. You will also receive access to 6 closed-door webinars led by China healthcare’s most influential C-suite executives. Offer Valid until August 12th 2020.