The hazy view around Menara Pelita, Kuching on Tuesday afternoon.

KUCHING: Sarawakians woke up to hazy conditions on Malaysia Day, with areas like Sri Aman recording an air quality index (API) of 99 at 8am on Tuesday.

That was the worst air quality reading nationwide at the time. Of the 10 API readings in Sarawak, four recorded above 51, which is in the “moderate” range.

In Sarikei, the API was 99, Kuching (80), Samarahan (75) and Bintulu (64). No API reading was posted for Sibu on the Environment Department’s website.

The visibility for the state capital was recorded at about 2km. The best air quality reading recorded in the state was in Limbang at 33.

Over in Peninsular Malaysia, haze conditions were reported mostly in the south, mirroring the situation in Sarawak and Sabah.

According to satellite imagery, the hotspot count was a staggering 673 on Borneo island.

According to the latest monthly weather bulletin published for June, most areas received 20% below the average rainfall across Sarawak.

Sibu and Miri Divisions received less than 100mm of rainfall, a reduction of more than 60% from average.

“Malaysia in generally still experiencing phase of Southwest Monsoon, which is characterised by surface winds that blow regularly from the west, and also relatively drier condition than the other seasons,” said the bulletin from the Malaysian Meteorological Department.

“This situation will result in most areas across the country to have more days without rain compare to rainy day, and in turn will lead to drier weather conditions,” it added.

Looking ahead, the weather forecast for Sarawak is isolated thunderstorms for the next few days, and wetter conditions towards the end of the week. 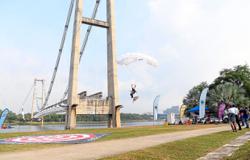