Malaysia's seahorses finally get the right kind of love 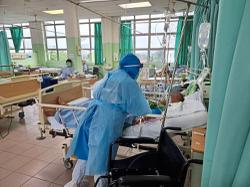 Earth Day, Earth Warriors: Save Our Seahorses (SOS) is standing up for the little fishes in a big pond.

Their bizarre, equine appearance, and their odd way of bobbing about in the water, are among the traits that make seahorses popular as keepsakes in fish tanks. But for those who think keeping seahorses is cool, one non-governmental organisation is advocating otherwise. It says the act contributes to the species’ fast-dwindling population, worsening the impact seahorses already suffer from sea trawling and heavy trading for medicinal purposes.

Save Our Seahorses Malaysia (SOS) has, for the past 10 years, been fighting for seahorses’ survival through research and awareness projects. Field trips conducted for volunteers and students inform them about why seahorses are important and should be left where they are – in the sea.

When SOS founder Choo Chee Kuang passed away last year, a lot of advocacy and research work fell on the hands of marine biologist Adam Lim, who is now project leader of the organisation.

“Previously in Malaysia, no one paid much attention to the plight of seahorses, until Choo started SOS, which comprised an informal group of volunteers who believe in the cause. Until today, SOS is very much volunteer-driven,” says Lim, 28. (SOS was recently registered as an NGO.)

Lim’s involvement with SOS dates back to 2007 when he joined field trips to the estuary of Sungai Pulai, Johor, to carry out seahorse tagging and sighting exercises. It wasn’t until his third trip there that he spotted a pair of seahorses. He recalls feeling elated and getting a sense of accomplishment with the find. Save Our Seahorses volunteers surveying the seagrass meadow at the Sungai Pulai estuary, which hosts Malaysia's largest seahorse colony.

Choo, he says, became his mentor when he was studying for his degree in marine biology. Lim is currently pursuing his PhD at Universiti Malaya with his thesis on the topic of “sound production of seahorses”. He is investigating if the acoustic sounds they produce have any bearing on their behaviour. He travels to Sungai Pulai regularly to conduct awareness trips for the public, while also writing scientific papers and articles to disseminate information about the little-known species.

“The volunteer visits are conducted every month during neap tide. When the water recedes, seahorse sightings can be done, and for that, anyone can become citizen scientists and learn a small part of marine biology.”

Seahorses have a unique feature: the male bears the unborn young. When mating, the female deposits her eggs into the male’s pouch, and he fertilises them internally. He carries the eggs in his pouch until they hatch. Lim says seahorses need protection because of their high mortality rate – only 1% of the babies survive into adulthood.

“There isn’t another species like the seahorse, made up of different animal-like compositions. It has the head of a horse, the curled tail of a monkey, a kangaroo-like pouch, and the eyes of a chameleon, all of which grant it camouflage abilities. Seahorses are important for various ecological, biological, economic and medicinal reasons. These fishes are important predators of the sea bottom community and removing them will only disrupt the marine ecosystem.”

There are about 53 species of seahorses worldwide, and Malaysia has 13 of them, which Lim considers as one of the most diverse in any country. Among them are the yellow seahorse (or common seahorse) that can be found in the Straits of Malacca, five species of the pygmy seahorse, tiger-tail seahorse, thorny seahorse, Kellogg’s seahorse (largest in Malaysia), three-spotted seahorse, hedgehog seahorse and the latest find, the Japanese seahorse.

“Over the last 10 years, we have tagged between 780 and 790 seahorses. Each time we recapture one, it helps us determine if it has moved from its previous location, its growth rate, and other indicators like its reproductive status and the species’ sex ratio.”

SOS has plans to extend its research beyond Johor to other states. A future project is a photo gallery where people can contribute visuals and share experiences of their encounters with seahorses.

Asked about his job motivation, Lim says he sees every day as a new challenge, and that only true passion will carry one through. “What many see on TV documentaries is just a small portion of what we really do. A lot of time is spent waiting, keying in data, being underwater to assess the marine life,” he says.

He stresses that much remains to be done for the conservation of seahorses. “They are not protected under any legislation, except for those within the confines of marine parks, which isn’t enough.

“The Sungai Pulai estuary, which has the biggest seagrass bed in Malaysia and hosts the largest population of the yellow seahorse, is not protected at all. Though a small area at only 1.8km in length and 38ha in size, it contains multiple ecosystems shared by different marine life. By destroying any one of the systems, a species’ survival is threatened,” he says.

SOS has been lobbying for protection of the Sungai Pulai estuary for years, and for the sake of seashorses, Lim hopes it will succeed. 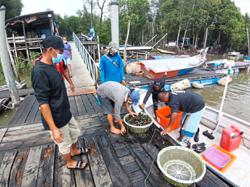