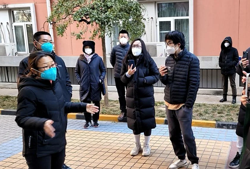 Santos Rene Soto, 59, and Santos Moises Soto III, also known as Saints Soto, 39, were indicted by a federal grand jury on charges of fraud and conspiracy connected with their artificial-intelligence company, GoldenSpear LLC. — Image by fabrikasimf on Freepik

US federal prosecutors accused a San Francisco father and son on Oct 4 of defrauding investors out of millions of dollars with fabricated business promotions – including a claim that their company had designed apparel equipped with a device that could detect whether the wearer was infected with Covid-19.

Santos Rene Soto, 59, and Santos Moises Soto III, also known as Saints Soto, 39, were indicted by a federal grand jury on charges of fraud and conspiracy connected with their artificial-intelligence company, GoldenSpear LLC. The son was the company’s chief executive and his father was a board member, prosecutors said. Both appeared in federal court for an initial hearing Tuesday and remain free pending their next scheduled appearance Oct 12.

According to the charges, after the outbreak of the coronavirus in early 2020, the men raised funds for a subsidiary company called AI Health, and told investors the company had created a wearable device, using artificial intelligence, that could detect the disease in the person wearing it.

They also claimed, falsely, that students and staff in a Los Angeles high school were wearing the devices, that the company was conducting a study using data from a hospital in Los Angeles, and that a prominent accounting firm had valued AI Health at more than US$100mil (RM463.30mil), prosecutors said. They said the scam raised more than US$2.5mil (RM11.58mil) from investors.

The indictment said the father and son also raised more than US$12mil (RM55.59mil) by touting a nonexistent “A.I. Fashion Assistant” that allegedly helped retailers identify clothing and brands that would appeal to their customers. From 2017 to March 2020, prosecutors said, Saints Soto falsely told potential investors that GoldenSpear had signed or was discussing contracts with many established businesses.

The two men are also charged with fraudulently obtaining a US$669,700 (RM3.10mil) loan from the government’s Paycheck Protection Program, which during the pandemic has provided loans to small businesses that they were not required to repay if they needed the funds to meet their payrolls.

A lawyer for the Sotos could not be reached for comment. – San Francisco Chronicle/Tribune News Service