YouTubers go magnet fishing in US and find 86 rockets. Now they have court date 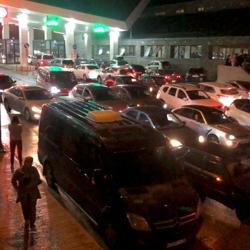 Despite the fines, the groups’ actions were largely well-received by viewers online. — Photo by Christian Wiediger on Unsplash

Within minutes of dropping their giant magnet into a river running through Georgia’s Fort Stewart, YouTubers Bryce Nachtwey and Matt Jackson were pulling up belts of rusted ammunition, mortar and armour plates.

In the eyes of a magnet fisher or treasure hunter, they had hit the tactical jackpot.

Then, they reeled in a mysterious Delta Air Lines bag stuffed to the brim with rockets. There were 86 in total, among other military equipment, the fishers counted in a YouTube video.

“This is probably the craziest thing we’ve ever found,” Nachtwey said in his YouTube video, adding that they believed the bag was full of “stolen military equipment.”

The group’s excitement was quelled, however, after they notified the authorities to turn in the items.

In the end, Nachtwey, Jackson and the third member of their group left with US$340 (RM1,515) in fines and a court date.

The team went fishing on June 24 and checked with the Department of Natural Resources before arriving at the river to magnet fish, according to the video.

After they pulled up the rockets, armour plates, bullets, navigation equipment and other items, the group called the police and a military police officer arrived to assess the situation, the video showed.

A game warden with the Fort Stewart Conservation Law Enforcement arrived and told the group they would be getting cited, according to the Military Times.

The alternative to tickets, the game warden added in the video, would be taking the group to jail for acquiring military property, even though they called authorities to handle it.

“You’re all getting tickets. You can come to court and talk to a judge,” the warden said. “The reason magnet fishing is not allowed is because of exactly what y’all got right there. You don’t know what’s going to blow up and what’s not going to blow up.”

The warden added that even if the group intended on cleaning up the waterways by removing the material, the base’s bomb disposal squad is responsible for that.

In his video, Nachtwey tried to explain that the group believed that the bridge was available to fish from because it was marked as a “green area” on the DNR’s resource map for fishing.

The game warden replied that the “green areas” cleared for fishing in the state don’t apply to military property such as Fort Stewart.

“Y’all would have been better off just leaving that... down there,” the warden said in the video.

Nachtwey and the group were cited for recreating without a permit, entering a restricted area and unauthorized magnet detecting, Fort Stewart told McClatchy News in an email.

“Because Fort Stewart-Hunter Army Airfield is an active training installation, ammunition of various sizes is fired here on a regular basis. There is always (the possibility) a potential unexploded ordnance can end up in the environment, to include rivers,” a Fort Stewart spokesperson told McClatchy News. “The risk of unexploded ordnance being present throughout the training area, regardless of how it got there, is one reason why activities like magnet detecting is not allowed.”

The three YouTubers’ court date is Sept 9, according to the game warden.

Despite the fines, the groups’ actions were largely well-received by viewers online.

“It’s quite scary to think of all that stuff just rotting away in our streams and rivers,” one person commented.

“I understand the officer’s concern about people magnet fishing and pulling stuff like that from the river, but instead of just voicing his concern and appreciating you guys cleaning up the waterways, he wrote the ticket, which would make other people less likely to turn in the stuff they found, which is really important,” another commenter said.

A Fort Stewart spokesperson added that people should remember the “three R’s” if they ever come across something that looks like an explosive: recognise, retreat and report.

The Fort Stewart base is about 45 miles (72km) southwest of Savannah. – The Charlotte Observer/Tribune News Service