Users are posting angry comments on social media, as they will not be able to use PayDirect or RFID at toll gates. — AZHAR MAHFOF/The Star

A check by LifestyleTech at approximately 7.30pm showed the app seemed to be back up and running, although the company still has yet to comment on the cause of the outage.)

PETALING JAYA: Touch ‘n Go’s ewallet has been facing disruption for a couple of hours, preventing users from accessing its ewallet, RFID menu, and PayDirect feature.

Those trying to access these features will instead be greeted by a “connection timed out” warning or other error messages.

Those using highways with tolls are recommended to use their TnG cards instead.

This has prompted users to post angry comments on social media, as they will not be able to use PayDirect or RFID at toll gates.

Some, they say, may not even be aware of the situation and may already be on the highway and will be shocked when they are unable to get past the toll gate.

In a Facebook post, the company said it’s working to rectify the matter and that it will post an update once the system is back online. 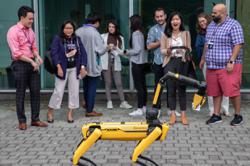