Venezuelan migrants are seen inside a coliseum where a temporary camp has been set up, after fleeing their country due to military operations, according to the Colombian migration agency, in Arauquita, Colombia. — Reuters

SOACHA, Colombia: When Colombia offered millions of Venezuelans who had fled chaos at home a fresh start and life of legality, the United Nations called the offer “historic” and migrants couldn’t wait to apply.

Then reality set it.

Without a mobile phone or laptop, no access to Internet and little in the way of digital skills, how were families even to apply for the new status and submit their slew of documents?

“It would be amazing to get my papers sorted out and walk around freely without fear of being deported,” said Venezuelan migrant Esneiro Gonzalez.

But the landmark gesture announced by Colombia in February has since revealed a deep digital divide that unintentionally excludes many of the very people it set out to help.

People like Gonzalez: a 41-year-old electrician and father of two, who fled his homeland four years ago, and has since operated on the margins of life in next-door Colombia.

“Being irregular, I can’t get a good job and healthcare in Colombia,” he told the Thomson Reuters Foundation.

Winning the legal status could let some 2.2 million people like him regularise their shaky status, work legally, claim some benefits and live without fear of deportation.

The UN refugee agency (UNHCR) hailed the 10-year Temporary Protected Status (TPS) on offer as the region’s most important humanitarian gesture in decades.

The only problem was that about half of the people it aimed to help couldn’t work out how to get near it.

“I don’t have access to the Internet or a high-end smartphone, and I’m not good with technology,” said Gonzalez, after his initial elation waned in the face of technology.

Some 5.4 million Venezuelans have emigrated in recent years, fleeing political turmoil and a humanitarian crisis in their homeland, crises only exacerbated by the pandemic.

Most have fled to countries across South America, with neighbouring Colombia the destination of choice.

But since registration began in May, fewer than a million Venezuelans who live in Colombia have completed registration online – a prerequisite for what is a long road to TPS.

But there are at least 800,000 more migrants, people like Gonzalez, who are eligible and keen to integrate yet find it difficult to register online, raising fears they could miss out.

So those on the wrong side of the digital divide – most of whom live in poor city areas and aren’t tech savvy – are being courted by NGOs and the UNHCR to ensure they don’t miss out.

Inside a church building in Soacha, a hillside slum outside the capital Bogota, Gonzalez is one of about 60 Venezuelans who are given guidance each day on how to register online.

With a tablet and stable Internet connection, aid workers from the International Rescue Committee (IRC) helped Gonzalez create an email account for the first time.

They guided Gonzalez through 92 questions just to register then helped him scan and upload a stack of documents – a near-impossible task without a mobile phone on a shaky Internet connection and without basic digital literacy skills.

“To start the whole process, a good Internet connection is indispensable,” said the IRC’s Gina Sanchez, who helped set up the digital support center with nine other aid groups in June.

“We’re aiming to reach the most vulnerable who don’t have Internet access and digital skills,” said Sanchez.

“Some migrants don’t know what a PDF is, don’t have an email address or know how to create one,” she added.

“The Venezuelan migrants arriving now are in a worse state than before – they are poorer and sicker,” said Sanchez.

Aid groups also fear that the tens of thousands of Venezuelans who live in rural areas – coffee pickers and those gathering coca leaves for cocaine – may be shut out altogether.

Colombia’s migration agency has set up 106 help centres across the country along with an outreach campaign on social media to better inform migrants.

Juan Francisco Espinosa, migration agency director, said in a statement that Colombia “should be proud of its collective effort” and is doing “very well” in guiding the applicants.

About 110,000 migrants have received help in applying online “because they do not have access to technology”, he has said.

Living in the upper reaches of a hillside slum, Franmaryoli Hernandez, a 29-year-old mother driven by hunger to leave her hotel job in Venezuela’s tourist Margarita island, considers herself tech savvy.

But without a computer, smartphone or broadband at her one-bed rental, she had to rely on a neighbour to get online.

This make-do method means it is difficult to check the status of her TPS application or advance to the next stage – an appointment with migration officials to provide biometric data.

“Right now, I don’t have enough money to take the bus, let alone go to an Internet cafe or pay for Internet on my phone,” said Hernandez, who is now a coffee street vendor.

Without any Internet, job hunting or telework is near impossible, whereas elusive TPS would increase her chances of earning the minimum monthly wage of about US$260 (RM1,102), Hernandez said.

“It would be incredible to get it and mean a better life for me and my daughter,” she said. – Thomson Reuters Foundation 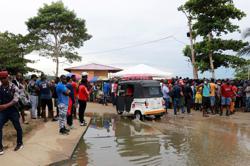