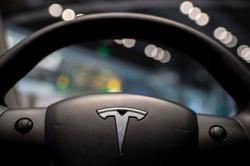 Tesla said in a Weibo posting that it made a report to a government agency about the accident, which occurred in the eastern city of Taizhou. — Reuters

Tesla Inc has pledged to work with Chinese authorities to investigate a crash involving one of its electric cars in which a policeman died.

The California-based company said in a Weibo posting that it made a report to a government agency about the accident, which occurred in the eastern city of Taizhou. One traffic policeman died after being injured in the accident, local police said in a later statement. A second officer injured in the crash is now out of danger, the statement said. Footage of the accident, reported widely by Chinese press, was spreading quickly on social media on May 18.

Another crash is also still under investigation in China after a Teslarear-ended a truck in Shaoguan in Guangdong province on May 7, killing the driver of the EV, according to a Global Times report. The cause of that accident isn’t yet clear.

Tesla has faced a slew of public criticism over recent weeks in the world’s biggest car market. Events came to a head at last month’s Shanghai Auto Show, when footage of an angry customer protesting atop one of its display cars went viral. Although Tesla is still the No 1 selling electric carmaker in the country, it has come under fire for its perceived arrogance toward car owners and there are growing concerns over the safety of its vehicles.

In the US too, Tesla’s technology has come under renewed scrutiny from state and federal regulators, mainly around the Autopilot function.

The US National Transportation Safety Board is investigating a fatal crash on the outskirts of Houston, Texas where a Tesla crashed into a tree at high speed and burst into flames, killing two men. Tesla has been adamant that Autopilot was not a factor in the crash, and a preliminary report from the NTSB indicates that the driver was behind the wheel when he left his home.

Earlier this month, a 35-year-old man died in Fontana, California when his Tesla collided with an overturned truck. NHTSA, or the National Highway Traffic Safety Administration, has sent a special crash team to investigate. – Bloomberg