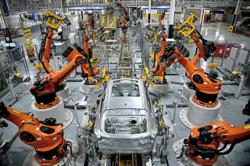 Staff members stand at the Tesla booth during a media day for the Auto Shanghai show in Shanghai, China. A woman wearing a white T-shirt with Chinese writing that translated as ‘Brake Lost Control’ climbed onto a red Model 3 in Tesla’s modest booth on April 19, according to videos and photos circulating on social media. — Reuters

A disgruntled Tesla Inc owner climbed atop one of the electric vehicle pioneer’s cars on the opening day of the Shanghai Auto Show, before being dragged away by security.

Wearing a white T-shirt with Chinese writing that translated as “Brake Lost Control”, the woman climbed onto a red Model 3 in Tesla’s modest booth on April 19, according to videos and photos circulating on social media.

Security guards surrounded the woman, and used open umbrellas to try conceal her message. However, she batted them away, repeatedly yelling “Tesla brake lost control”, before being dragged from the car and escorted away.

Tesla said the woman, a car-owner from Henan, “is widely known for having repeatedly protested against Tesla’s brake issue”. She was livestreaming earlier from near Tesla’s booth before staging her protest. After failing to persuade her to come down from the car, the company decided to start security measures, a Shanghai-based representative said.

Tesla “places great emphasis” on consumer rights, and has raised several solutions in previous negotiations with the woman, but she insisted on returning the car while refusing to have an independent check-up, the representative said.

The woman claims the brakes of her Model 3 failed and four of her family members were almost killed in an accident, Shine News reported last month. However, Tesla said vehicle data showed the car was travelling at almost 120 kilometers per hour (75 miles per hour) and the car’s braking and emergency-warning systems had functioned properly. – Bloomberg 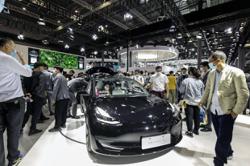