A food delivery worker wearing a face mask prepares to deliver foods for his customers outside a restaurant in Beijing. Conditions and pay are so poor for the e-commerce workers and delivery people who kept China fed and enriched their bosses' coffers during the pandemic that one just set himself on fire in protest. — AP

HONG KONG: E-commerce workers who kept China fed during the coronavirus pandemic, making their billionaire bosses even richer, are so unhappy with their pay and treatment that one just set himself on fire in protest.

China’s Internet industries already were known for long, demanding days. With millions of families confined at home, demand surged and employees delivered tons of vegetables, rice, meat, diapers and other supplies, often aboard scooters that exposed them to sub-freezing winter cold.

For white-collar workers in the technology industry, pay is better than in some industries but employees are often expected to work 12 hours a day or more.

The human cost caught public attention after the deaths of two employees from e-commerce platform Pinduoduo, known for selling fresh produce at low prices. Their deaths prompted suggestions they were overworked. In an indication of high-level concern, the official Xinhua News Agency called for shorter work hours, describing long hours of overtime at the expense of employees’ health as an “illegal” operation.

Renewed concerns over dire working conditions for delivery drivers also came to the forefront when a video circulated on Chinese social media showing what it said was a driver for Ele.me, part of e-commerce giant Alibaba Group, setting himself on fire to protest unpaid wages.

The controversy is a blow to the image of Internet industries that are transforming China’s economy and generating new jobs. They have made some of the founders among the world’s wealthiest entrepreneurs. During the heights of the pandemic, the fortunes of the biggest, including Alibaba founder Jack Ma and Pinduoduo founder Colin Huang, swelled as online consumer spending boomed.

In a video widely circulated on Chinese social media, 45-year-old delivery driver Liu Jin poured gasoline and set himself on fire outside a distribution station for Eleme in the eastern city of Taizhou, shouting that he wanted his money. Others snuffed the flames and rushed him to a hospital, where he is being treated for third-degree burns on his body.

Details of Liu’s complaint could not be verified and Eleme did not immediately respond to a request for comment.

Separately, a 43-year-old delivery driver collapsed on the job and died last week while delivering food for Eleme.

The company said in a statement that it will give 600,000 yuan (RM374,090) to the driver’s family and raised its insurance coverage for drivers to that level. Its statement said Eleme “had not done enough in terms of accidental death insurance, and needs to do more”.

The issue was highlighted again after a Pinduoduo employee surnamed Tan committed suicide after taking leave from the firm to return to his hometown, less than two weeks after a 22-year-old employee surnamed Zhang in Urumqi collapsed while walking home from work with colleagues, and later passed away.

Pinduoduo, China’s third-largest e-commerce firm, released statements saying it was providing assistance and support to the families of the two employees who died. Shanghai authorities also are reviewing working hours, contracts and other conditions at the company.

The deaths raised an outcry on social media, with many people suspecting that they were a result of overwork. Chinese social media users blasted the country’s technology sector, criticising not just Pinduoduo for a culture of long hours but pointing out that this was an industry-wide problem, with similar company cultures seen at most of China’s large technology companies.

They also revived a national debate over the tech sector’s so-called “996” working culture, in which employees often work from 9am to 9pm six days a week. Companies sometimes pay huge bonuses to some employees, enticing them to work more overtime.

“We must strive to succeed in pursuit of dreams, but the legitimate rights and interests of workers cannot be ignored or even violated,” said state-owned Xinhua News Agency in a post on microblogging site Weibo.

The issue has also cast a spotlight on the working conditions of delivery drivers, who are under heavy pressure to get orders to customers quickly and at times make less than 10 yuan (RM6.23) per delivery. If they fail to meet deadlines, fines imposed can range from as little as 1 yuan (RM0.62) to as much as 500 yuan (RM311.74) if a customer lodges a complaint.

As part of the gig economy, such delivery workers often do not get the benefits provided to full-time employees, such as social or medical insurance.

Since there are many people willing to work under those conditions, it is hard for employees to negotiate better pay and conditions.

Last August, the All-China Federation of Trade Unions (ACFTU) – the only trade union allowed to legally exist in communist-ruled China – said that 6.5 million delivery workers had joined it since 2018. However, the worker rights group China Labour Bulletin, which tracks labour relations in China, says little has been done to improve workers’ ability to win better treatment from companies. The union provides only skills training, legal assistance and some medical benefits.

Under China’s labour laws, workers and labourers should work no longer than eight hours a day, or more than 44 hours a week on average. Total amount of overtime should not exceed more than 36 hours in a month, and should only be done “after consultation with the trade union and labourers”.

However, even though the labour laws exist, they are rarely enforced as employees become mired in a culture of overwork while striving for bonuses or in cases of delivery drivers, to eke out a living.

Delivery workers are part of a corporate culture where even white-collar employees in the technology sector work excessively long hours, Li noted.

Putting workers at an even bigger disadvantage, indemnity clauses are at times written into workers’ contracts in some industries, absolving a company from responsibility for death on the job and other such events, said Li of China Labor Watch. Although such clauses may violate China’s labour laws, the legal system in China is opaque and laws can be difficult to enforce.

“In Western countries, if an employee dies because of working overtime, then the legal and economic costs will be greater, and they are generally more restrained as the country’s laws will intervene,” said Li. “But in China, there is no bottom line when it comes to working overtime, and companies are generally not held liable in the event of death.” – AP 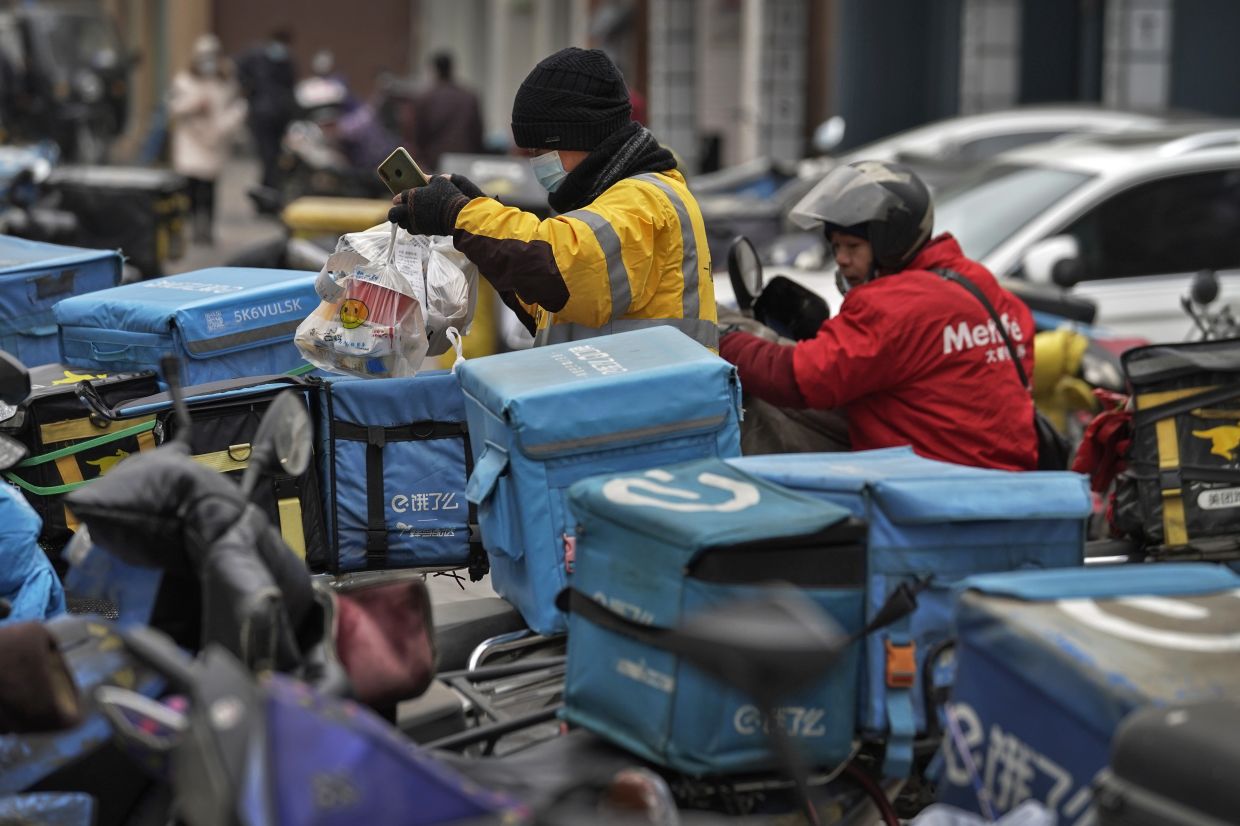 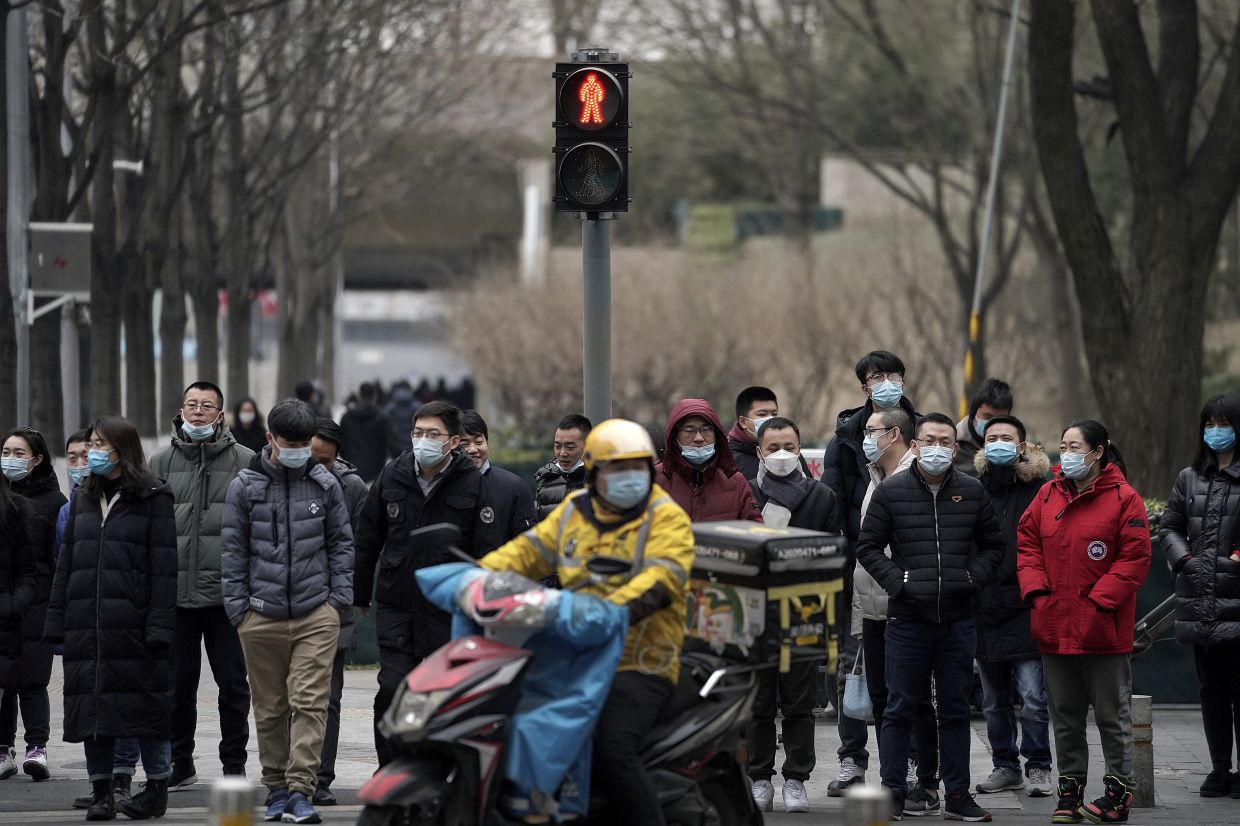 A food delivery worker wearing a face mask prepares to deliver foods for his customers outside a restaurant in Beijing. Conditions and pay are so poor for the e-commerce workers and delivery people who kept China fed and enriched their bosses' coffers during the pandemic that one just set himself on fire in protest. — AP

A food delivery worker wearing a face mask to help curb the spread of the coronavirus prepares to deliver foods for his customers at a shopping mall in Beijing. — AP

A food delivery worker and office workers wearing face masks to protect themselves from the coronavirus wait to cross a street in Beijing. — AP

A food delivery worker wearing a face mask rides on a street in Beijing. — AP

Holiday retail workers seek ‘temporary lifeline’ in warehouse jobs, if they can find one