By Nadine Schimroszik and Douglas Busvine 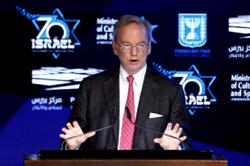 A man walks past a SAP logo during the company's annual general meeting in Mannheim, Germany, May 15, 2019. REUTERS/Ralph Orlowski/Files

BERLIN (Reuters) - Head of customer support Adaire Fox-Martin is leaving SAP, the latest high-level departure at the software group as it struggles to pull off a major business transformation amid a pandemic.

Irishwoman Fox-Martin, a holdover from Bill McDermott's decade at the helm, follows her former boss out of the door. Co-CEO Jennifer Morgan left last April, leaving Christian Klein in sole charge of the business.

SAP confirmed Fox-Martin's departure, previously reported by Reuters, after earlier on Friday reporting annual results that came in at the top end of its own lowered expectations.

Fox-Martin, who headed SAP's Customer Success organisation, will depart at the end of this month.

As also reported by Reuters, the supervisory board appointed Julia White, who joins from Microsoft, as chief marketing and solutions officer, while SAP veteran Scott Russell will head up Customer Success.

The hiring of White adds a personal dimension to SAP's deepening ties with Microsoft, which is already lending marketing clout to its drive to convert its customers to cloud computing. White, 47, will remain based in the United States.

“We are very pleased to have both Julia and Scott join the executive board to help continue SAP’s strategic direction,” SAP chairman and co-founder Hasso Plattner said in a statement, also thanking Fox-Martin for her long service.

SAP says its switch to subscription-based cloud services will boost growth and profit margins in the long term, but weaning itself off the upfront fees that its legacy software licences throw off is creating near-term headwinds.

Asked whether SAP was eyeing acquisitions, Klein said he was not interested in "buying revenue" - an allusion to rival Salesforce's $28 billion purchase of workplace collaboration app Slack.

SAP would screen the market for smaller deals where they made sense, Klein added. He declined to elaborate on the forthcoming U.S. listing of SAP's customer sentiment unit Qualtrics, acquired in October 2018 for $8 billion.

The management rejig came hard on the heels of 2020 results that beat market expectations.

The company also forecast adjusted revenue, at constant currency, would be unchanged to up 2% this year, while adjusted operating profit was seen falling by 1%-6%.

Klein abandoned his medium-term targets last October when he said SAP would go all-in on its shift to cloud computing, cautioning that business would take longer than expected to recover from the coronavirus pandemic.

That announcement, which came with a third-quarter earnings miss, sparked the biggest drop in SAP shares in a generation, causing the leading provider of enterprise software to lose its mantle as Europe's most valuable technology company.

SAP's 2020 revenue exceeded its lowered guidance, while profit hit the high end, the company said in an overnight news release issued ahead of results scheduled on Jan. 29.

The company plans a kick-off event, called Rise with SAP, on Jan. 27 to promote its cloud drive. Klein teased the prospect of more news on SAP's relationship with Microsoft around the event. "Watch this space," he said.

Klein, who became a father for the second time on the day he was named sole CEO, said he was handing over some duties to new chief people officer Sabine Bendiek - another Microsoft alumna - who will also assume his role as chief operating officer.

SAP shares wiped out earlier gains to trade 0.4% lower in Frankfurt. They have shed more than a quarter in value since their all-time high set last September, valuing the Walldorf-based company at $156 billion.

(Reporting by Douglas Busvine in Berlin. Editing by Mark Potter)