Earthlings and astronauts chat away via ham radio

The International Space Station cost more than US$100bil (RM401bil). A ham radio set can be had for a few hundred bucks.

Perhaps that explains, in part, the appeal of having one of humankind’s greatest scientific inventions communicate with Earth via technology that’s more than 100 years old. But perhaps there’s a simpler explanation for why astronauts and ham radio operators have been talking, and talking, for years.

Nasa astronaut Doug Wheelock was just a few weeks into his six-month mission at the space station when feelings of isolation began to set in.Wheelock would be separated from loved ones, save for communication via an Internet phone, email or social media. At times, the stress and tension of serving as the station’s commander could be intense.

One night, as he looked out a window at the Earth below, he remembered the space station’s ham radio. He figured he’d turn it on – see if anyone was listening.

“Any station, any station, this is the International Space Station,” Wheelock said.

A flood of voices jumbled out of the airwaves.

Astronauts aboard the space station often speak to students via ham radio, which can also be used in emergencies, but those are scheduled appearances. Some, like Wheelock, spend their limited free time making contact with amateur radio operators around the world.

“It allowed me to... just reach out to humanity down there,” said Wheelock, who interacted with many operators, known as “hams”, during that stay at the space station in 2010.

“It became my emotional, and a really visceral, connection to the planet.”

The first amateur radio transmission from space dates to 1983, when astronaut Owen Garriott took to the airwaves from the Space Shuttle Columbia. Garriott was a licensed ham who, back on Earth, had used his home equipment in Houston to chat with his father in Oklahoma.

“We thought it would be a good encouragement for young people to get interested in science and engineering if they could experience this,” said England, who was the second astronaut to use ham radio in space.

An almost-all-volunteer organisation called Amateur Radio on the International Space Station, or Ariss, now helps arrange contact between students and astronauts on the space station. Students prepare to ask questions rapid-fire, one after another, into the ham radio microphone for the brief 10-minute window before the space station flies out of range.

“We try to think of ourselves as planting seeds and hoping that we get some mighty oaks to grow,” said Kenneth G. Ransom, the ISS Ham project coordinator at Nasa’s Johnson Space Center in Houston.

Typically, about 25 schools throughout the world are chosen each year, said Rosalie White, international secretary treasurer at Ariss.

“Not too many people get to talk to an astronaut,” she said. “They get the importance of that.”

The conversations are a treat for the astronauts as well.

“You’re talking to someone and looking right down at where they are,” Nasa astronaut Ricky Arnold II said. 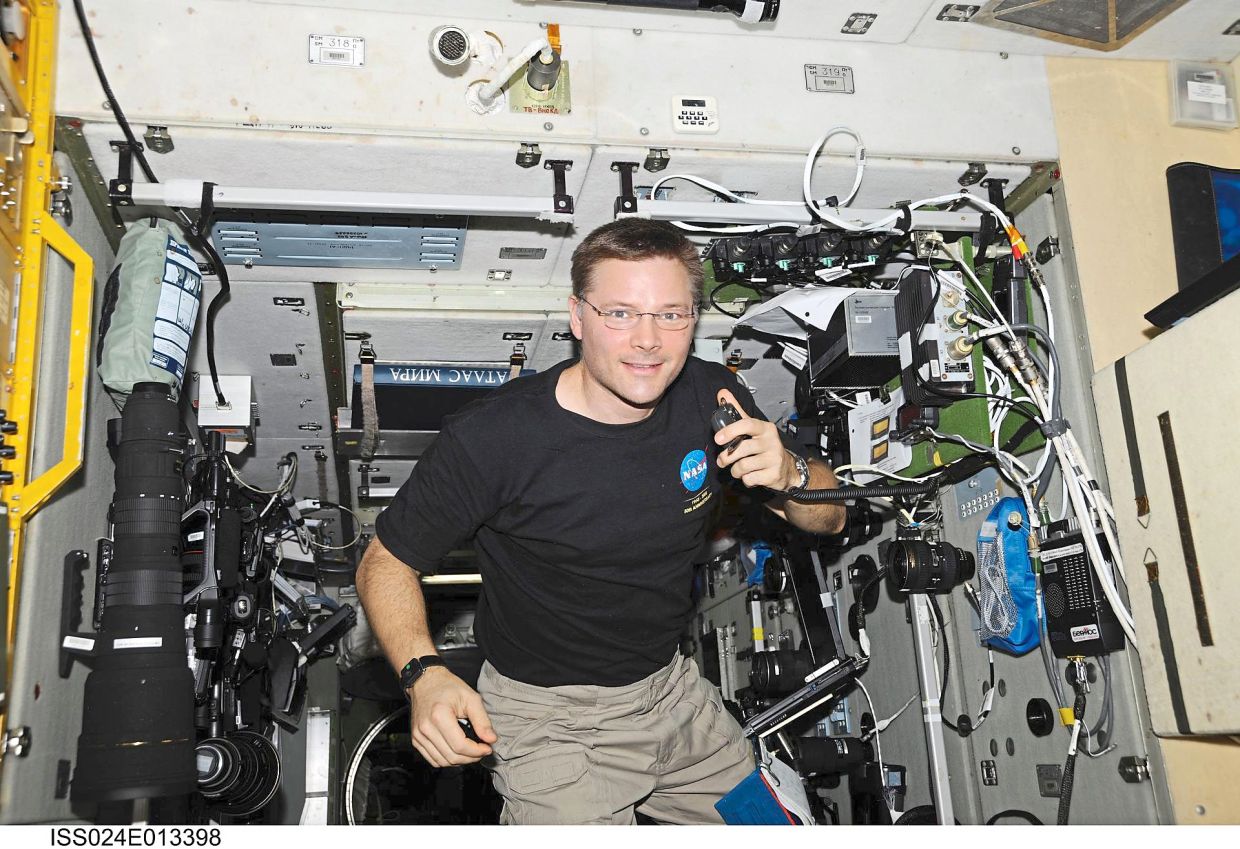 Wheelock made contact with some of the first responders who worked to rescue the 33 Chilean miners trapped underground for 69 days in 2010. — Nasa

Over the last 10 years, ham radio has become more popular, experts say, with about 750,000 licensed amateur operators across the United States (not all of whom are active on the air). Helping to drive that interest: emergency communications.

“Ham radio is when all else fails,” said Diana Feinberg, Los Angeles section manager for the American Radio Relay League, the national association for amateur radio. “Unlike other forms of communication, it does not require any kind of a switched network.”

But for some hams, the allure is the opportunity to connect with people all over the world – or even above it.

During his 10-day shuttle mission in 1983, astronaut Garriott spoke with about 250 hams all over the world, including King Hussein of Jordan and Senator Barry Goldwater of Arizona. Garriott died in 2019.

“From my perspective, even from a young age, it was very obvious how globally inspirational that moment was,” said his son Richard Garriott. “People from Australia and America, just all over, had tuned in, and it clearly touched them. No matter what their station was, no matter where physically they were, they all became part of this global experience.”

It’s not surprising that Richard Garriott followed his father’s example with a 2008 flight to the space station as a private astronaut. During his free time on the 12-day mission, the younger Garriott made contact with so many hams on the ground – including his father – that the two pieces of paper he brought to record contacts filled up during his first day on the radio.

“Any moderately populated landmass, without regard to time of day or night, you would find a bountiful group of enthusiasts who are ready to make contact,” he said.

What drives this desire for contact? Amateur radio operators love a challenge, particularly when it comes to reaching remote or unusual locations.

“We’re always, in amateur radio, talking to people we don’t know,” England said. “If we didn’t enjoy the adventure of meeting other people through that way, we probably wouldn’t have been amateur radio operators.”

Amateur operator Larry Shaunce has made a handful of contacts with astronauts over the years, the first time in the 1980s, when, as a teenager, he reached Owen Garriott.

“Hello, this is Larry in Minnesota,” he said after Aunon-Chancellor acknowledged his call sign.

“Oh, Minnesota!” she replied, adding that she could hear him “super clear” up in space and that he must have nice equipment.

“It’s always exciting when you talk to somebody in space,” said Shaunce, an electronic technician in Albert Lea, Minnesota. “You just never know. I monitor the frequency all the time.”

The pair sat in a truck with an antenna on the roof and the radio equipment in the cab. After a few tries, they heard Aunon-Chancellor respond: “Hey, good morning, Florida. How are you?”

Lea, 53, a filmmaker and engineer, recalled that he and his friend were “sitting in the middle of a cabbage field. The fact that she came back to him was kind of incredible”.

Lea’s daughter Hope has tried for years to reach the space station but has never gotten a response. She got her ham radio license at age eight. Now 14, Hope is thinking about becoming an astronaut and going to Mars, her father said.

David Pruett, an emergency physician from Hillsboro, Oregon, tried to contact the space station using a multi-band amateur radio with a magnetic mount antenna, placed in a pizza pan to improve performance. Working from his dining-room table, he made many fruitless attempts. But one day, the space station got close to the West Coast, and Pruett again put out the call.

Then came a crackle, then the voice of astronaut Wheelock. At the close, both signed off with “73” – ham lingo for “best regards”. Remembering that first conversation in 2010 still makes the hair on Pruett’s arms stand up.

“It was absolutely unbelievable,” Pruett said.

Pruett and Wheelock went on to have 31 contacts in all, one when Pruett was stuck in a traffic jam in Tacoma, Wash.

“I feel like I struck up a friendship with him,” said Pruett, 64, who chronicled many of his contacts on YouTube.

“I can only imagine that their workload is very tight, and they’ve got precious little free time, but I think it was very generous of him to donate as much of his free time to amateur radio operators as he did.”

Wheelock’s other ham radio contacts made similarly deep impressions on him – including a man from Portugal he spoke to so many times that Wheeler and his fellow astronauts once serenaded him with Happy Birthday To You.

Wheelock also made contact with some of the first responders who worked to rescue the 33 Chilean miners trapped underground for 69 days in 2010.

“I just wanted to give a word of encouragement to let them know that there’s someone above that cares about what they’re doing and what’s in their path,” he said.

During a six-month mission from 2005 to 2006, Nasa astronaut William McArthur spoke via ham radio with 37 schools and made more than 1,800 individual contacts in more than 90 countries.

“That’s just an infinitesimally small percentage of the world’s population, but it’s a lot more than I think I could have directly touched any other way,” he said.

“I wanted to share with people who maybe were random, who maybe didn’t have a special connection or insight into space exploration.”

It also allowed for some variety in his conversation partners. During his mission, McArthur’s main crew mate was Russian cosmonaut Valeri Tokarev.

“I love him like a brother. We’re very, very close,” he said.