While the order takes aim at prominant Chinese platforms, apps like WeChat Pay and Alipay have their biggest customer base in greater China and the number of users in the US is relatively small. — AFP

President Donald Trump signed an order banning US transactions with eight Chinese software apps including Ant Group Co’s Alipay in 45 days, when he’ll no longer be in office.

The order is the outgoing administration’s latest bid to use national security powers against China’s largest technology companies, but it will be up to President-elect Joe Biden to decide whether to enforce the policy. It also deals another blow to Ant co-founder Jack Ma, who hasn’t been seen in public since Chinese regulators halted Ant’s US$35bil (RM140.28bil) IPO and launched an antitrust probe into Alibaba Group Holding Ltd.

The executive order, which directed the Commerce Department to draft rules outlining which payments and transactions will be outlawed, will impact Tencent Holdings Ltd’s QQ Wallet and WeChat Pay, as well as CamScanner, SHAREit, VMate and WPS Office.

The order is likely to face legal challenges similar to those mounted against the president’s prior efforts to force the sale of TikTok from China’s ByteDance Ltd and ban the WeChat messaging app. But Biden could also pause or erase the policy upon taking office.

The immediate impact is likely to be limited. Apps like WeChat and Alipay have their biggest customer base in greater China and the number of users in the US is relatively small. It’s not clear whether the order could be applied to transactions outside the US – Starbucks Corp, for example, allows customers to pay with WeChat Pay in China. Alibaba and Tencent shares rose more than 1% on Wednesday in Hong Kong.

Of the groups named in Trump’s order, document-scanning app CamScanner was the most downloaded in 2020 with 4.4 million installs, according to research firm SensorTower. That surpassed Tencent’s WeChat – the social media service used by over one billion Chinese – which chalked up 1.6 million downloads last year. The order targeted WeChat and QQ Wallet, the digital wallets built into Tencent’s two largest platforms of the same name.

Alipay managed just over 207,000 downloads in 2020. Ant’s signature app has mainly focused in the US on places where Chinese consumers visit and shop, such as luxury stores in New York or tourist destinations in California. But in 2019, Alipay inked deals with retailers like drugstore chain Walgreens, placing the app’s logo in front of millions more US consumers.

“The new Executive Order is similar to, but appears to be more broadly worded, than last year’s Executive Orders targeting transactions in respect of WeChat and TikTok,” said Nicholas Turner, a lawyer at Steptoe & Johnson LLP in Hong Kong. “The ultimate scope of the restrictions and the entities that will be targeted is hard to predict. Presumably, the impact will be focused on transactions in the United States, although that is not guaranteed.”

The Trump administration envisions the scope as being similar to the prior orders and does not anticipate it impacting employee payroll, a senior administration official said. But the officials did not answer a question about whether it would affect individual payments between users of the platforms.

Still, Trump’s order, which cites concerns that the platforms threaten national security, has the potential to significantly disrupt international commerce. Senior administration officials said they believe the move could help stop the encroachment of Chinese data collection and prevent personal information like texts, calls, and photos from being gathered by an adversary.

But they didn’t identify specific instances of data theft using the applications. Instead, they pointed to the size of the payment platforms, saying their scope made them likely targets for Chinese data collection efforts.

“The Chinese government requires that all commercial companies, big and small, support the Chinese Communist Party’s political objectives,” National Security Advisor Robert O’Brien said in a statement. The Chinese Foreign Ministry in Beijing didn’t immediately respond Wednesday to a request for comment on the order.

Commerce Secretary Wilbur Ross issued a separate statement saying he has directed his department to carry out the order. “I stand with President Trump’s commitment to protecting the privacy and security of Americans from threats posed by the Chinese Communist Party,” he said.

The 45-day timeline mirrored a similar period in the WeChat and TikTok executive orders, according to one of the officials who briefed reporters on the condition of anonymity, and there was no consideration of accelerating the implementation before the end of the administration. The Trump administration hasn’t briefed Biden’s transition team about the order, the official said.

The executive order was first reported by Reuters. – Bloomberg 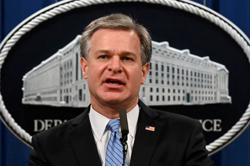