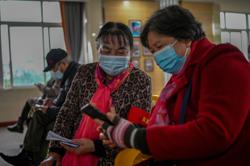 Elderly people attending a training session to get retirees up to speed with digital devices, at the Xiaojiahe University of Old Age in Chengdu, the capital of China's Sichuan province. Photo: AFP

Li Changming just purchased a new smartphone and the 70-year-old retiree is still a bit puzzled by a high-tech device that China policymakers hope will help unlock spending by millions of older Chinese.

Undeterred, he's enrolled in a training session – sort of a "mobile phones 101" – that is part of China's plans to help its legions of pensioners keep up in a fast-developing digital economy.

"I don't understand all the functions yet but I want to learn," Li said, tapping gingerly at the screen.

"You're never too old to learn."

He and his elderly classmates in the southwestern city of Chengdu sat and listened as an instructor expounded on the use of popular Chinese apps, navigation with map programmes and how to change phone settings.

Demonstrating how to shut down background apps, the teacher tried to use terms the greying students could grasp.

"It's like the room has become too crowded, and you need to clean it up," he said.

China is pushing a years-long effort to boost domestic consumption to bring balance to an economy traditionally over-reliant on manufacturing and government investment.

E-commerce is a central pillar.

Vast and growing amounts of Chinese economic activity are now handled through digital apps that have become part of the fabric of life in modern China, led by Tencent's WeChat Pay and its rival Alipay, run by Alibaba spin-off Ant Group.

Together they dominate the huge Chinese online payments industry, typified by shoppers scanning QR codes to make purchases rather than use physical cash, which has become old-fashioned in China. Most retirees in China are keen to adopt new tech and tap into a growing range of mobile services catering to them. Photo: Visualhunt

Can't live without it

Brands worldwide are chasing the so-called "silver dollar" and governments also are keen to get elderly savings flowing into economies to boost growth.

Chinese retirees are expected to number 300 million by 2025, and Daxue Consulting now estimates the size of the country's elderly economy at around 4.9 trillion yuan (RM3 tril).

And Beijing says 98% of rural areas are now connected to 4G internet networks.

Most retirees in China are keen to adopt new tech and tap into a growing range of mobile services catering to them.

A report by banking group UBS this year said older consumers were "already catching up" with the younger generation.

"We can't live without smartphones," says Meng Li, 61, who also joined the Chengdu course and only recently learned how to make mobile payments.

"I only knew how to make a call at first, but after my daughter showed me more and I joined training sessions like today, I can handle it now."

In November the government called for a nationwide push to "strengthen the ability of the elderly" to use digital tech, urging communities to hold training sessions and developers to create elderly-friendly apps.

This has become even more imperative in the era of the coronavirus, which emerged in the Chinese city of Wuhan.

More than 36 million more people got online for the first time between March and June this year, official figures show, a raft of potential new online spenders.

Just getting around during the pandemic requires digital fluency.

Public transportation and many other venues in China require citizens to show a health app that rates their coronavirus threat level based on recent travel and other habits.

Another push is China's ongoing 10-year census that, for the first time, Beijing wants most residents to respond to online.

Still, nearly a third of the country's 1.4 billion people are still offline.

Li and his classmates, however, have graduated to the digital world.

After class, he used his digital wallet to buy chilli peppers from a market, essential ingredients in Chengdu's famously spicy Sichuan cuisine.

He is also excited about being able to check restaurant ratings before going out to eat, and using map apps to get there.

Looking at his new purchase through his reading glasses, the silver-haired retiree still has plenty of plans.

"There are still many things I have to learn. Mastering photos on my mobile is my goal for the next 10 years," Li said. - AFP Relaxnews