The city of Shanghai, where Pinduoduo Inc is based. — Leslin_Liu/Pixabay

Colin Huang stepped down as chief executive officer of Pinduoduo Inc after building the five-year-old startup into a force in China’s e-commerce industry and, in the process, becoming one of the country’s richest people.

He’s turning the role over to Lei Chen, another founder at the Shanghai-based company, effective immediately, PDD said in a letter to employees posted on its website. Huang, 40, will remain chairman.

"I hope that through the management changes, we can gradually hand over more managerial duties and responsibilities to our younger colleagues, give space and opportunities for the team to grow, and drive Pinduoduo to become a more mature company with continuous entrepreneurial spirit,” Huang wrote in the letter.

While tech founders often eventually cede management duties to lieutenants, Huang is handing over the reins just a few years after PDD’s start. Huang and his co-founders started the group-shopping app in 2015 at a time when Alibaba Group Holding Ltd seemed to have a lock on the e-commerce business in China.

But PDD provided an innovative service with discounted goods and customised offerings, and went public in 2018. The company’s shares have soared more than four-fold since then and its market cap is about US$102bil (RM437.17bil). Huang’s net worth is now US$44.3bil (RM189.87bil), the third-highest in China, according to the Bloomberg Billionaires Index.

Analysts at Jefferies and Citigroup Inc said the move was unexpected and a surprise. PDD’s shares were little changed in US trading.

Huang, previously an engineer at Google, said in the letter that he had transferred around 371 million ordinary shares currently under his name to the Pinduoduo Partnership, and that he wanted some of the stock to be used for research and social responsibility. That transfer is equal to about 7.7% of total shares, he said. In addition, Huang said he had officially set up a charity foundation and that together with the founding team, had donated to it around 114 million Pinduoduo shares, or about 2.4% of total shares.

In a separate Q&A circulated to media, Huang said he would step back from day-to-day management to work on the company’s long-term strategy and corporate structure, and devote more time to fundamental research that could drive the future of PDD.

A data scientist by training, Chen has served as chief technology officer since 2016. He said he will focus on growing the company’s newer business units, citing its shipping information system as an example. "This division of labour will help us steer the company in its next phase of growth and development,” Chen said. – Bloomberg 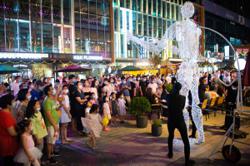