Ghostly shells and fictional science: the intersection of human lives and technology

We need more good sci-fi stories to make us think about the tech we introduce into our lives. — 123rf.com

Yesterday, instead of going out to get my weekly groceries like a sensible person, I stayed at home and binge-watched Ghost In The Shell: SAC_2045. In hindsight, that might not have been the wisest decision, and not only because the only food I have left is some cake batter and chicken drumsticks.

The original was a manga by Masamune Shirow, and featured the sexy cyborg Motoko Kusanagi fighting crime in a futuristic cyberpunk world. Robots were common everyday tech, cybernetic enhancements blurred the lines between humans and machines, and almost everyone has willingly upgraded their grey matter into cyberbrains that can directly connect to the Internet.

Every other adaptation of Ghost In The Shell that I’ve watched always had something interesting to say about the intersection of human lives and technology. The first film adaptation examined the concept of self-identity when all your thoughts/memories can be quantified as software and your body is replaceable hardware.

The Stand Alone Complex (GITS: SAC) anime TV series explored the effects of memetic propagation and memetic mutation in a society that’s intrinsically linked to its information networks, and the catastrophic social and political aftershocks from a simple act of hacktivism.

And the live action GITS film starring Scarlett Johansson made me look deep into my soul to question why I paid money to watch this terrible Hollywood version.

Basically, the good versions of Ghost In The Shell tended to ask big questions and explore what could happen to real world human societies when fictional (though excitingly and/or terrifyingly possible) technology is introduced to it. In other words, the good versions of GITS were good sci-fi stories first and foremost.

And dangit, I think we need more good sci-fi stories to make us think about the tech we introduce into our lives, because otherwise we as a society are going to plunge head-first into a scientifically advanced dystopia.

One of my favourite examples of exploratory sci-fi comes in the form of the video game Deus Ex: Human Revolution.

In that 2011 video game, “augmentations” are introduced in a near-futuristic world, meaning everyone can get bionic limbs that work better than our natural equipment. The catch is, these augmentations are expensive, and once you’ve replaced your limbs with cyber-prostheses, you become dependent on a drug that keeps your organic-cybernetic interface functioning.

This scenario created a wildly dystopian scenario where poor people had to go into debt (and amputation and drug dependency) to get cyberlimbs, because they simply couldn’t compete economically otherwise.

It really makes you think: what’d happen if this fictional sci-fi technology actually became a reality? How would cybernetic limbs further widen the gap between the rich and the poor?

Would you be willing to modify your body if it’s the only way to feed your family? And if you think cybernetics is wrong, and you somehow manage to pass a national law banning cybernetics in your country, what happens when another country mandates all its citizens to get upgrades to be extra efficient? You just can’t win, one way or the other.

Deus Ex managed to explore these philosophical ideas through great world-building, while still giving the players the cathartic fun of running around as a half-machine half-human hero with sword arms and the ability to punch bad guys through walls. (Because being a cyborg is always awesome as long as you’re the hero of the story. Whee!)

Honestly though, we don’t even need to only look at fancy-schmancy technology like robotics and space ships to explore interesting sci-fi questions – I mean, why hasn’t anybody written a sci-fi story about electronic payments? Because that tech can be disruptive as heck, and we have it right now.

Imagine a world where nobody carries any cash whatsoever, and absolutely all payments are done digitally. How would that world work?If all transactions rely on always-online payment networks, would anyone make a backup plan to keep business going when the underlying infrastructure goes kaput? (Spoiler alert from the real world, based on the Visa payment outage across Europe in 2018: probably not.)

If someone came up to you and asked, “excuse me sir/ma’am, can you please spare me a dollar so I can eat?”, how would you donate to them? Would that person need to have a QR code on their body you can scan?

Wait, actually, wouldn’t being a poor person be even worse in a society that doesn’t use physical money? Because to even have any amount of digital money, you’d need to be able to afford access to a bank account, and possibly a mobile phone to actually manage your money. A fully cashless society has the potential to shortchange low earners, and people from an older generation who have difficulties adapting to online banking.

This is why we need good sci-fi stories – to make us think about the impact of technology before we go adopting it all willy nilly.

Look, I’m not saying that Ghost In The Shell: SAC_2045 is a bad show because it’s not science-fictiony enough. In fact, it’s perfectly fine entertainment – it has an interesting plot with a decent amount of mystery, and it has really good visuals. And it’s hard to outright dislike a show where a one-eyed cyborg sniper shoots a mecha battlesuit with an anti-tank rifle after fending off killer AI robo-dogs, because hot dang that’s awesome.

But for me at least, when it comes to good science fiction, all the cool robot fight scenes and awesome- looking technology are just the delicious chocolate icing on the cake. It’s the far-reaching questions and philosophical contemplation of the impact of technology that forms the real meat and bones of this, uh, cake? This... sci-fi meat cake?

Yikes, this metaphor just got weird, but let’s pretend that the idea of someone cooking this ludicrous chocolate-glazed meat cake is the premise for my upcoming sci-fi story. And considering the desperate state of my pantry, this might have a very near-future setting.

Raised by wild Nintendo consoles and trained in the ways of the computer scientist, Shaun A. Noordin tries to use his knowledge of web development, technology and video games for the greater good. Or for entertainment and amusement, whichever is easier. He has a lot of advice to share, but they’re all inadvisable to follow. 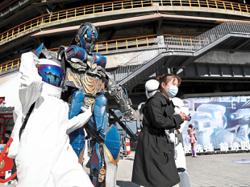