These engineers are training AI to forge handwriting – why? 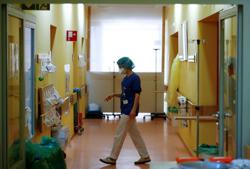 A researcher in Germany demonstrates the steps needed to imitate handwriting using a newly developed artificial intelligence that has both positive and negative potential. — Daniel Karmann/dpa

We all like to think our handwriting is unique. But computers look set to soon take that away from us.

Researchers in Germany are developing a new artificial intelligence that can precisely imitate any kind of handwriting you feed it.

Rather than being intended for AI-enhanced forgeries, the technology is initially intended to help people who can no longer write because of injury or some other impairment.

In theory, chat messages, social media posts or other online text could instantly be made to appear in your own "unique" hand handwriting.

"The fact that we can now imitate handwriting this well is new," says computer scientist Vincent Christlein from the Department of Pattern Recognition at the University of Erlangen-Nuremberg in Germany.

It's not the first time developers have tried to digitise human handwriting, and fonts available online already allow you to imitate the writing of people like Donald Trump and Greta Thunberg.

However, the system promises a far more sophisticated level of imitation, and rather than simply imitating individual letters, the new method works on the basis of generating entire lines of text, just as a human might.

The system then virtually creates its own "skeletonisation" of your writing by analysing each stroke of the pen down to a single pixel. It then reproduces the order in which each of your individual strokes would be created.

You can then set whatever text you want, and the system will generate it for you.

"If someone writes unclearly, it doesn't work so well," Christlein admits. But the method still has plenty of potential – both good and bad.

In a study, the researchers presented test persons with writing examples. In half of the cases, they could not tell whether they were from the original writer or the computer.

However, when subjects could compare both, they could tell the difference. "There are words where you can clearly see it," says Christlein.

One of Christlein's colleagues plans to use the method to train a recognition software for historical scripts. This needs many examples to work well. But with historical material these are not always available.

With the handwriting imitation one could therefore artificially create historical examples.

Despite the team's honorable intentions, it's still conceivable that forgers would use the software for nefarious purposes such as imitating a handwritten will. "Of course, it can also be misused – as with many technologies," Christlein says.

But it might also help investigators to develop better systems to unmask counterfeiters, he says. For now, he and his colleagues are primarily concerned with developing the technology, Christlein emphasises. The team have not yet planned to launch a software on the market and the research status has been made public in a preprint paper. – dpa