Particles can carry information securely because intercepting them would alter the message and alert the receiver or sender. Researchers in Nanjing have condensed the quantum equipment and packed it into a drone. — SCMP

Chinese scientists say they have developed the world’s first fleet of drones equipped with quantum communication technology so that robots can share information securely with each other and human operators.

Researchers at Nanjing University, in eastern China, built drones able to generate pairs of “entangled” particles of light that could carry information in quantum states such as charges or polarisations representing 0 or 1, according to their paper published this month in the journal National Science Review. By the laws of quantum physics, disturbing one entangled particle in a pair would affect the other, regardless of distance – meaning that information carried by such particles could not be intercepted without altering the message and alerting the receiver or sender.

Quantum communication devices, or quantum nodes, are usually set up in a laboratory with bulky, complex equipment including laser pumps, beam-splitting crystals, mirrors and ultra-sensitive detectors.

But Professor Zhu Shining and colleagues at the National Laboratory of Solid State Microstructures significantly reduced the size of the quantum node and packed it into a drone weighing 35kg (77lbs).

“A third of the weight comes from the battery,” said Professor Xie Zhenda, a co-author of the paper. “We have built and deployed about 10 drones.”

With future upgrades, these drones will be able to connect to quantum satellites or a ground-based quantum communication network and provide an “ultimate solution to secure data transfer”, the researchers wrote in the paper. Each of the drones could generate 2.4 million pairs of entangled particles of light each second, they said.

Existing military drone communication is protected by mathematical encryption. Google announced last year a prototype quantum computer that could complete in 200 seconds a computational task that would take the fastest supercomputers about 10,000 years.

The machine could not yet be used to decode information, but it is believed that the technology would eventually produce a code breaker that could work out a password protected by number-based algorithm in seconds. Drones could thus be hijacked and turned against their home base – and the best known way to protect them is using quantum communication.

But quantum communication involves many challenges. For instance, the sender – or rather the particle-emitting device that uses a crystal to split a beam of laser light in two, entangling the particles – must be positioned in a straight line of sight from the receiver.

Compared with satellites and ground-based stations, drones are not stable platforms and are vulnerable to unpredictable conditions. A gust of wind could make the Nanjing team’s drones sway by an arm's length, they found.

To keep the airborne drone’s entangled particle emitter and the receiver on the ground pointing at each other, Zhu and colleagues used pairs of beacon light beams to coordinate their positions. They reduced the margin of error to about 1.3 microns, smaller than a 50th of the width of a human hair.

A medium-sized camera at the drone’s belly can also act as a receiver to pick up the entangled light particles, or photons, from the ground station or other drones and pass messages to others in the network.

The range of effective communication in the experiment was limited to about 200 metres (656 feet) during their experiment, but the researchers team said they could use a larger drone camera to extend the range to 2km (1.2 miles). The military-grade cameras on high-altitude drones such as China’s Rainbow and the United States’ Predator series – two of the world’s most widely used war drones – had a range of up to 200km, according to their paper.

Another challenge during the experiment came from the drone’s eight pairs of rotary blades, which generated vibrations that could affect the precision of the quantum devices. The researchers used specially designed rubber absorbers to eliminate the vibrations.

Future improvements would be required before the technology could be deployed in battle or other real-life applications. One problem was the low efficiency of photon reception. Although the drone could generate large numbers of entangled photons, only 10 particles per second could be received at the other end, limiting the amount of information that could be carried. 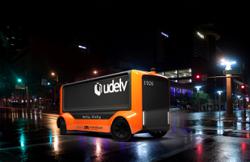