The Bartesian cocktail making machine mixes a drink at the Bartesian booth during the CES tech show in Las Vegas. — AP

LAS VEGAS: A wristband that will help you say "no" to junk food. A machine that will mix drinks for you.

These were among the gadgets showcased this week at the CES technology conference in Las Vegas.

The four-day show, which opened Jan 7, is a place for companies to unveil their products and services for the coming year, though Apple, Google and other tech giants often hold their own announcement events. Streaming services and surveillance technologies are among the hot topics this year.

Here are some highlights from the show:

A London startup believes it can help you make healthier diet choices at the grocery store – using your own DNA.

DnaNudge collects your DNA through a cheek swab and sends data related to nutrition to a wristband.

Have a genetic predisposition to high blood pressure? Maybe the wristband will tell you to stay away from salty snacks. You scan the barcode on a product, and the wristband turns red or green to indicate whether it may be good for you.

A few services have popped up to map DNA in the hopes of helping people make better diet choices, though some scientists say genetic makeup is just one of many factors in living a healthy lifestyle.

Currently, DnaNudge does cheek swabs only in person in London, but it's working on a mail order service. The company says it destroys all DNA records after giving you the wristband.

No need to shake or stir. These machines will mix cocktails for you.

They’re like Keurig coffee machines, but for booze. Drop in a pod filled with ingredients, slide in a glass, and less than a minute later, you’ll have a martini or a Moscow mule.

In fact, one of the gizmos is made by Keurig. Drinkworks by Keurig sells for US$299 (RM1,227) and can make cosmopolitans and fizzy drinks, such as vodka sodas. Each pod makes one cocktail and costs about US$4 (RM16). 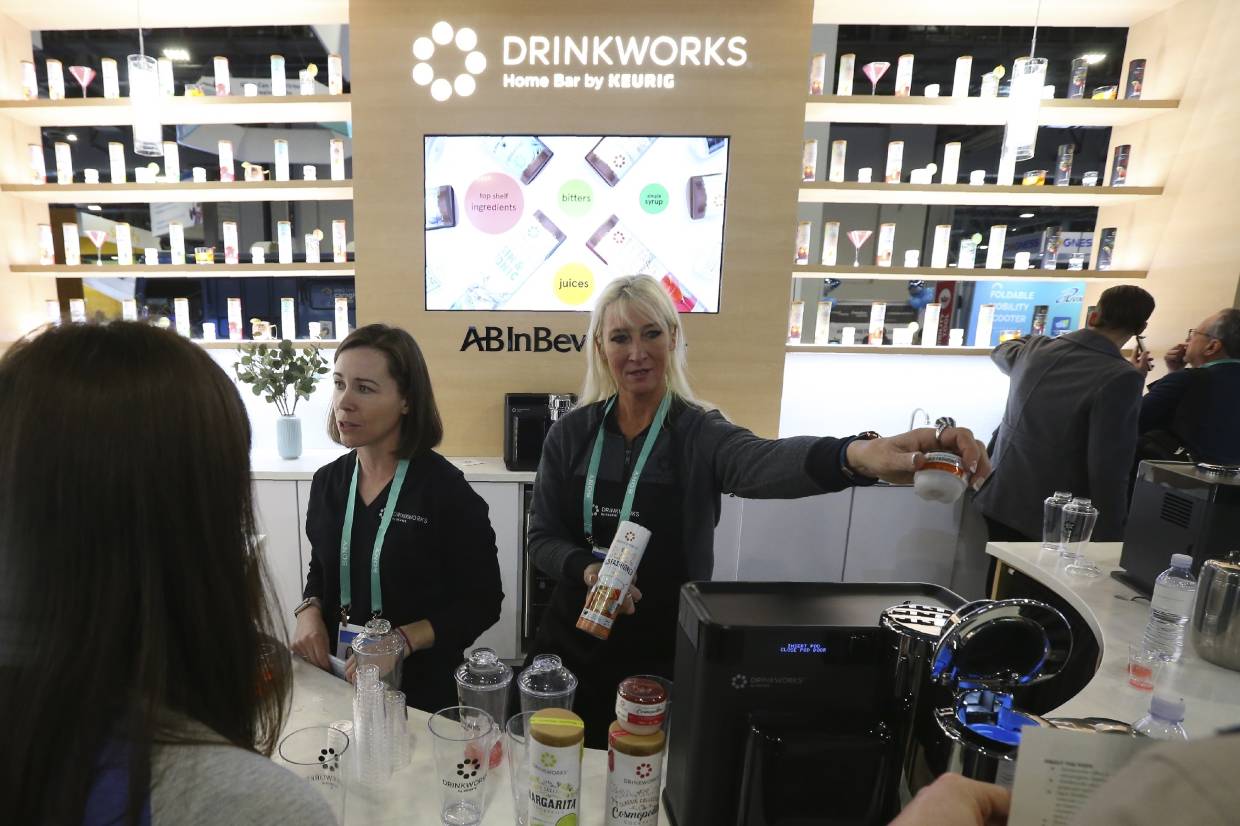 Another robotic bartender, the US$350 (RM1,436) Bartesian, sells pods for US$2.50 (RM10.26) each, but they don't have alcohol. Instead, you fill canisters with your own whiskey, vodka, gin and tequila. The pods mix in juices, herbs and other flavourings. A touchscreen on the Bartesian lets you choose how stiff you want your drink. There’s even an option for alcohol-free "mocktails".

Both machines sit on a counter or table at home. The companies hope to target those who like to host parties but don’t want to stock a bar, don’t know how to make drinks or would rather push a button than spend time putting together a mojito.

"We do all that for you,” Drinkworks CEO Nathaniel Davis said. "And then allow you to spend time with your guests.”

Some people go to CES to glimpse the future of consumer technology. Others are looking for the future of what’s going to get hacked.

One is an Internet-connected device for opening garage doors. McAfee’s threat research team says the MyQ Hub made by Illinois-based Chamberlain Group could be hacked by jamming the radio frequency signals while the garage is being remotely closed. That could lead it to open instead. Chamberlain says it's fixing its app to prevent this, but chances of a real-world hack occurring are "extremely low” and based on an unlikely chain of events.

Google is adding a privacy "undo" feature to its Assistant voice technology.

Just tell Assistant to disregard something if you happen to notice the device was listening when it wasn’t supposed to. By saying "Hey Google, that wasn’t for you”, Assistant will delete whatever you just said. Although Assistant is supposed to send voice commands out for processing only when it hears "Hey" or "OK, Google", it can mishear other conversations as the trigger word. Just tell Assistant to disregard something if you happen to notice the device was listening when it wasn’t supposed to. — Bloomberg

Another new feature will let you use your voice to ask Google about your own privacy settings.

The new features supplement privacy controls Google rolled out last year to let people delete their voice recording histories with voice commands. That came after pushback that Google and other companies were using human transcribers rather than just machines to listen to some audio recordings.

Assistant will also debut new tools such as household notes, which lets people leave virtual notes with voice commands for other members in their families. The notes will show up on Google's smart Nest Hub displays as reminders.

Samsung’s idea for your new robot friend is a simple ball that rolls along beside you. Its name: Ballie.

The technology within Ballie is anything but simple. The artificial intelligence companion has a camera that can record and send video. Ballie can communicate with other smart devices around the house. 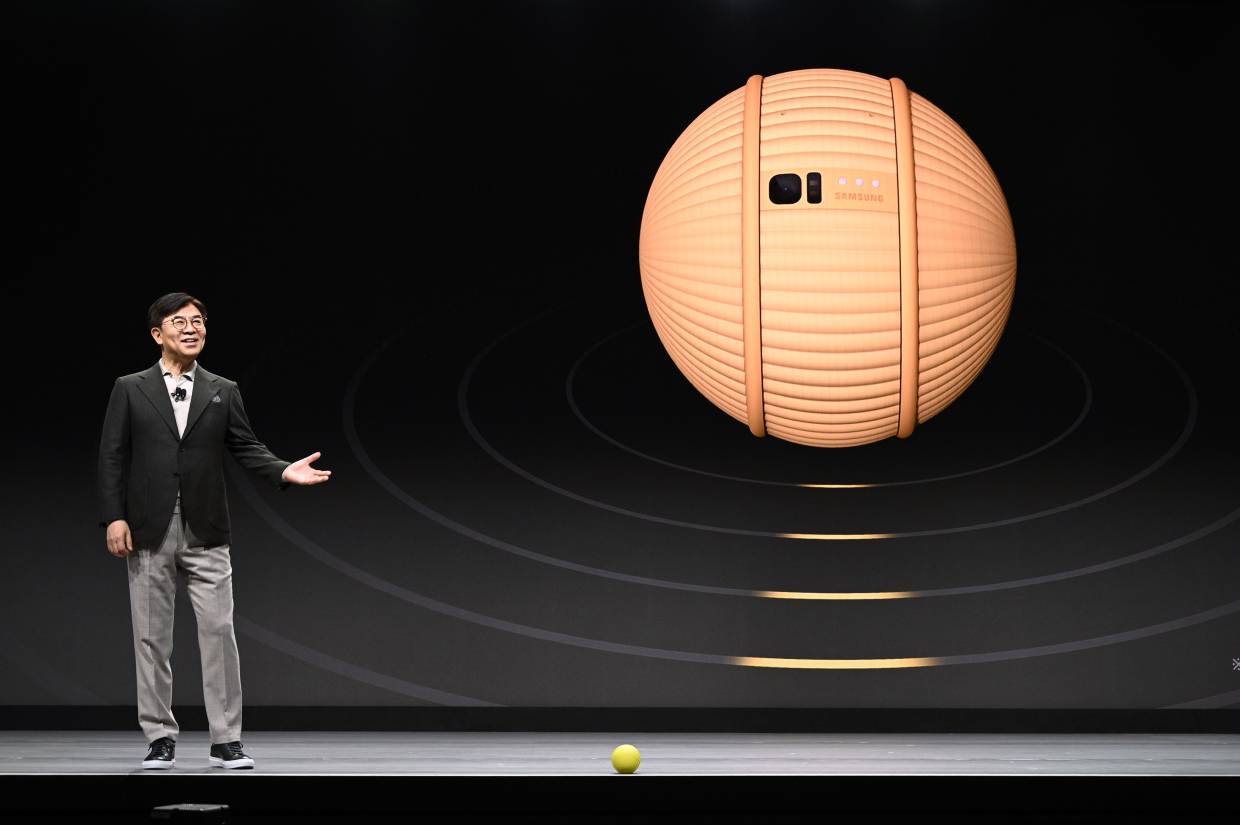 Kim introducing Ballie, a round yellow life companion robot that can react and interact with its owner, during his keynote address at the 2020 CES in Las Vegas, Nevada. — AFP

In its keynote at CES, Samsung showed the bright yellow ball – about the size of a baseball – rolling behind H.S. Kim, CEO of the company’s consumer electronics division. It kept its distance from Kim when asked to, and a video showed Ballie as a companion to pets at home alone.

"It’s a vision of technology as an all-around personal life companion,” Kim said.

Ballie's unveiling was part of Samsung's efforts to show how AI can offer conveniences, peace of mind – and in this case, companionship.

Samsung didn’t say when Ballie would go on sale or how much it would cost. Samsung's chief research scientist, Sebastian Seung, said Ballie would come with strict privacy standards, but didn’t offer details. – AP 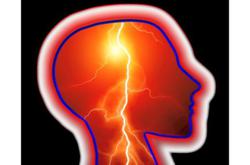