Alipay and WeChat Pay say they have opened up their vast ecosystems to foreigners, but access to functions is limited, Moon finds. Cash is no longer king, as life runs through screens and mobile payments platforms. — SCMP

“You might not have to make that trip to the bank after all,” Rob, a friend, messaged me over WeChat the other day. He attached a press release saying Alipay had launched an international version of its mobile payments platform for visitors to China.

Named “Tour Pass”, the app can be used for up to 90 days and could prove handy for me – I had moved from Hong Kong to Beijing for three months just over a month ago.

The last time I lived in Beijing, five years ago while studying at Peking University, cash was still currency, shared bikes did not exist and people did not have their morning Starbucks delivered via an app.

Since then China has transformed into an almost cashless society at an exceptionally fast pace. According to China’s central bank, People’s Bank of China, the volume of domestic mobile payment transactions reached 277.4tril yuan (RM164.91tril) in 2018, up more than 28 times compared with five years earlier.

Still, I told Rob I wasn’t sure I could be bothered with the hassle of setting up a bank account, figuring it was easier to go without and withdraw from my Hong Kong account.

But the realisation quickly hit – life here functions completely through screens and mostly through two apps, WeChat, with its mobile payment arm WeChat Pay, and Alipay. Almost all payments are done via mobile phones, and even getting into the office building requires scanning a QR code on WeChat, the all-encompassing social-media app with 1 billion monthly users founded by technology giant Tencent Holdings.

WeChat Pay and Alipay dominate more than 90% of the mobile payments market in China. And to be in on the action, you need a domestic bank account and phone number.

The international version of Alipay, the mobile payments platform founded by South China Morning Post parent Alibaba Group Holding, was – in a first – announced as a game changer.

It requires a foreign mobile phone number and bank card, which can be used to top up your account with a maximum of 2,000 yuan (RM1,189.02) at a time. 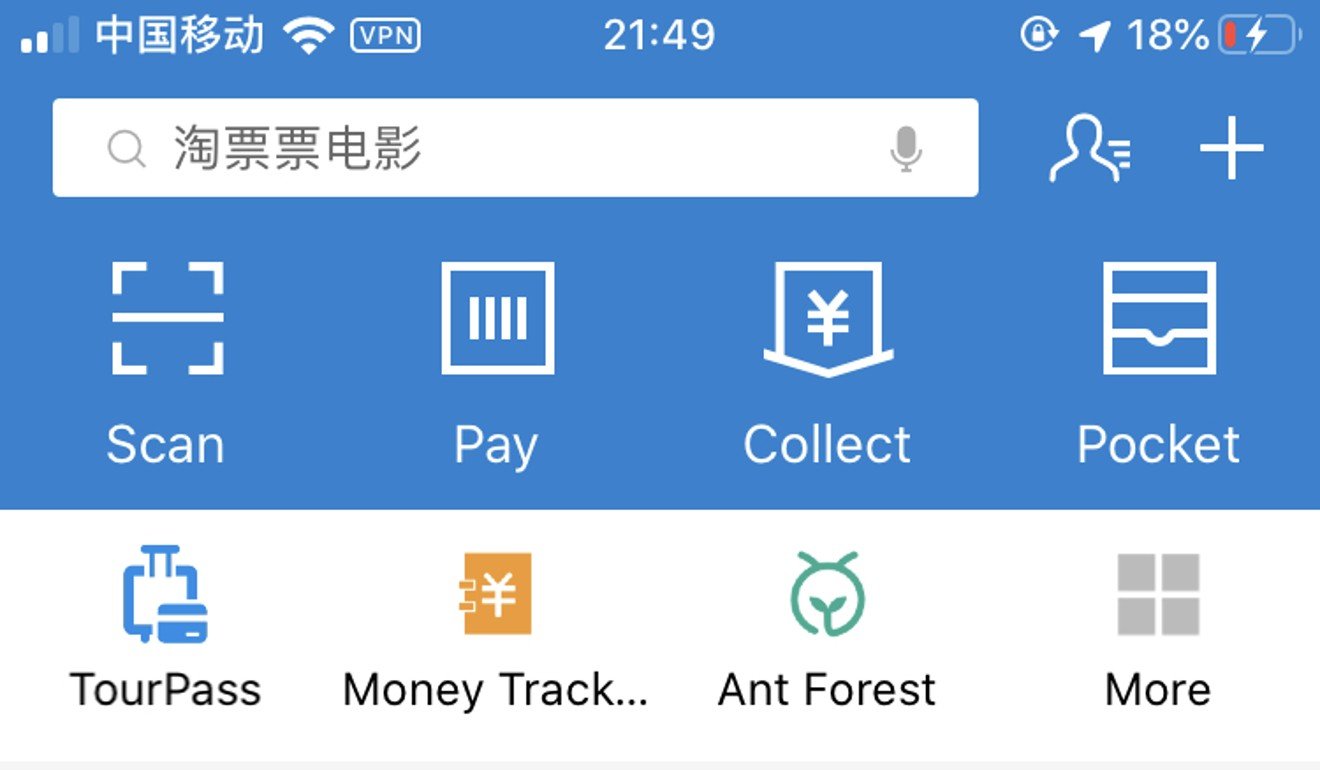 But I ran into a hurdle at the very outset – a Hong Kong mobile phone number does not count as foreign, and I was automatically logged into the app’s domestic version.

After two days, and numerous failed attempts using other relatives’ details, I was finally in. I used my father’s details, which he had to verify via a text message from his bank in the United Kingdom.

To say I was excited would be an understatement. I felt I was part of the club. In a quick scan or beep I could now pay for everything from a meal to groceries at 7 Eleven, to a movie ticket or a cab ride.

But that’s about it. According to Alipay, its international version should also support other functions within the app that automatically transfer money to merchants, such as when ordering food and hailing a cab, much like Uber. But I have found the system has not fully opened itself up to foreigners and I still cannot access any of the mini apps, or their individual functions.

Being locked out means you don’t truly experience the quirks or intricacies of everyday life in China.

This week, Alipay extended its reach and entered the automotive market, announcing an agreement with Chinese electric car startup Xpeng Motors for the development of an in-car payments system for services such as battery charging facilities and entertainment apps.

Meanwhile, WeChat Pay seems to be preferred and is slightly more widely accepted. It is the go-to payment method for cab drivers, and some restaurants do not accept Alipay.

WeChat too has announced it will now support international credit cards, allowing access to dozens of services, including e-commerce and ride hailing. But I’ve only encountered a “busy service” notification during several attempts to set it up.

My wait for a fuller experience of China’s mobile payments universe continues.

Going cashless is not just about using Apple Pay on a coffee run. Chinese payment service providers have created ecosystems featuring mini apps that allow users to do absolutely everything through one system – transferring money, paying the water bill, buying a lottery ticket, paying for the weekly grocery shopping and having dinner delivered to your doorstep.

Although each has their own individual app, many also require Chinese bank accounts, or are linked back to WeChat or Alipay.

For a tourist visiting for a week or two, Alipay’s international version is convenient and means no cash needs to be withdrawn. But if you’re here for any longer, like me, it still feels like there is a barrier between you and the “real” China. No food deliveries from the hundreds of Meituan motorbikes that zoom past each day, no testing out Luckin Coffee, Starbucks’ domestic rival, and – most disappointingly – no zipping around on a Mobike.

You cannot unlock shared bikes that line the streets invitingly, as they require users to scan a QR code and automatically transfer money. Most annoyingly, particularly as I am coming from the land of abundant taxis in Hong Kong, it is hard to hail a cab on the street. The majority are pre-ordered either via mini apps, or on individual apps linked to these payment systems.

I’ve also been at the receiving end of some very unimpressed looks – when I walked eagerly into Luckin Coffee, excited to test it out, momentarily forgetting its entire business model runs on mobile payments.

As an outsider I have lost money. When change for drinks did not materialise, I caught the eye of the bartender, who simply shrugged. The indication – tough luck, we do not have any cash to give you.

But I have gained a taxi ride and one of my five-a-day. When I tried to pay back a friend, who used WeChat Pay for our taxi fare, she backed away almost in horror: “Please, I don’t want cash!” When a cafe did not have the right change for my order, the staff gave me extra broccoli instead.

People talk of China as being advanced in adopting mobile payments apps, while other societies lag behind. But the reality is it is a necessity to use WeChat Pay or Alipay amid a dearth of other options. Hong Kong, in contrast, accepts debit cards, Visa, MasterCard, American Express, mobile payments and cash, which might also explain why it has not adopted mobile payment systems so rapidly.

It can be frustrating to slowly count cash as locals wait to pay with a quick scan, and I feel bad being inconvenient entertainment for vendors who don’t have change. You might catch me shopping via a quick beep of a QR code, but, as the temperature drops and the appeal of riding a shared bike lessens, I am mostly resigned to the fact that I won’t be fully integrated into the workings of China. – South China Morning Post