The collab with AMC's The Walking Dead follows similar tie-ins for PUBG Mobile, which have included campaigns with Resident Evil 2 and Godzilla: King Of Monsters.

LOS ANGELES: PUBG Mobile players can now take on the form of key characters from The Walking Dead and use weapons and vehicles featured from AMC's long-running zombie apocalypse series.

Beginning Oct 1 and into early 2020, PUBG Mobile players can opt to traverse the battlefield as familiar heroes – or legendary villain Negan. Limited edition in-game items are set to include skins for Daryl Dixon, Rick Grimes, Negan and Michonne, as well as Daryl's motorcycle, Michonne's katana and Negan's bat, Lucille. 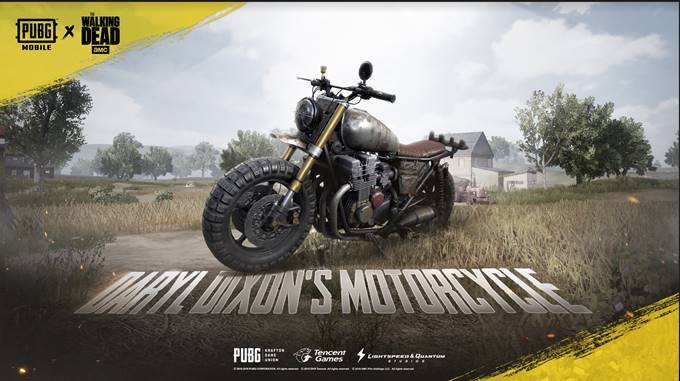 The deal is timed to promote the Season 10 premiere of Walking Dead, on Sunday, Oct 6. The crossover partnership was struck between AMC and PUBG and Tencent Games, which owns a stake PUBG publisher Bluehole.

The free-to-play PUBG Mobile is based on PlayerUnknown's Battlegrounds battle royale game. In the mobile version, up to 100 players parachute onto a remote island to battle in a winner-takes-all showdown. Since its release last year, PUBG Mobile has had more than 400 million downloads and an average of 50 million daily users, according to the company.

The Walking Dead is here! Play as some of your favorite characters, wield their iconic weapons, and utilize their skills to stay alive in the battlefields of Erangel, Sanhok, Miramar, and Vikendi. Explore new events, earn rewards, and know that survival brings us together! pic.twitter.com/SxfPZDFFrQ

The collab with AMC's The Walking Dead follows similar tie-ins for PUBG Mobile, which have included campaigns with Resident Evil 2 and Godzilla: King Of Monsters.

Based on the comic book series written by Robert Kirkman and published by Image Comics, The Walking Dead tells the story of the months and years after a zombie apocalypse and follows a group of survivors who travel in search of a safe and secure home. The series is executive produced by chief content officer Scott M. Gimple, showrunner Angela Kang, Robert Kirkman, Gale Anne Hurd, Dave Alpert, Greg Nicotero, Joseph Incaprera and Denise Huth. – Variety/Reuters

UK watchdog dismisses criticisms over crypto authorisations
Google to build its first cloud region in Greece
Tech IPO market faces worst year since global financial crisis
Tesla’s AI Day offers a glimpse of just how sentient its bots have become
Metaverse: Now the perfume industry is getting in on the game
Trump nearly tweet-fired daughter Ivanka, Kushner from White House
Gamers to bid farewell to FIFA franchise after 30 years
China tests central bank digital currency use to settle trades via ‘bridge’ with partners including Hong Kong, Thailand and UAE
AI guru is helping retool popular Japanese snacks like Pocky
SG uni student took upskirt video of woman in toilet and then waited to apologise to her