PARIS/LONDON: It is heralded as an essential step to a brave new world of technology, but in the here and now, super-fast 5G networking is already pitting China against the West.

Here are five things to know about the fifth-generation successor to today’s 4G technology, which is a decade old and struggling to keep pace with global broadband demand.

5G promises radically quicker transfers of data, instigating major changes to an array of products and services from self-driving cars to “telemedicine”.

On the entertainment front, users will be able to download a high-definition movie in a few minutes compared to an hour or two now.

The market for streaming videogames, a rapidly growing area, will get a huge lift, as will the “Internet of Things” – domestic appliances, lighting and other at-home technologies connected and operated remotely.

It’s not just about speed of downloads and uploads. 5G promises much lower “latency” than 4G. That is the time lag between a command being sent by a user and a device acting on it.

In the real world, that brings into play the possibility of factory robots being operated remotely or surgeons operating on patients from far away using augmented reality glasses.

The most visible gain from lower latency could be with the widespread advent of self-driving cars. But these will need 5G networks to cover large areas, which is some way off.

5G is already here in South Korea and for fixed internet lines in some US cities. It is also available in parts of Estonia, Finland and Switzerland.

The global breakthrough – widespread ultra-fast mobile networks on a par with 4G today – is still in the works.

Japan and China are targeting 2020 for nationwide rollouts. The rest of Asia and Europe will follow over the decade.

And when will most of us see 5G smartphones? China’s Huawei was set to launch a 5G phone May 16 in London.

But broad adoption by consumers depends on 5G networks spreading far enough, and for the handhelds’ chips and other architecture to be capable of handling the added workload.

Governments first need to harmonise standards for the award of so-called millimetre-wave (mmWave) spectrum, which will carry the vast data flows promised by 5G.

That high-frequency mmWave spectrum starts at about 30 gigahertz. In contrast, 4G networks operate at lower than 6 GHz.

That means not only ultra-fast broadband but also much greater bandwidth for many more users and devices to be connected to the network at the same time.

To bring the promised speeds to the masses, 5G requires a whole new infrastructure of masts, base stations and receivers.

Among the networking companies in the race are Huawei, Sweden’s Ericsson and Nokia of Finland. South Korean giant Samsung and China’s ZTE are other infrastructure players.

Huawei says it offers better technology at a lower cost. The Chinese leader, however, is hitting hurdles in the global race.

The US government says Huawei – founded by former Chinese army engineer Ren Zhengfei – is a security risk and has urged allies including Britain to shun its equipment over fears it could serve as a Trojan horse for Chinese intelligence services.

The US government has banned all federal agencies from acquiring Huawei equipment. Others including Australia, Japan and India have followed suit.

Against the backdrop of a US-China trade war, on May 14 US President Donald Trump went further by effectively barring Huawei from the US market.

China then formally arrested two Canadians already being held on suspicion of stealing state secrets in a case seen as retaliation over Canada’s arrest of a Huawei executive on a US extradition request. – AFP Huawei IdeaHub helps the world settle into the next normal 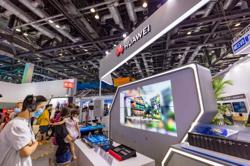