Young children should be exposed to STEM at an early age and DIY drones is one way to get them interested. — AZMAN GHANI/The Star

Building drones could spark an interest in STEM subjects, and lead to a high-flying career.

AT 16, when most girls her age are wrongfully stereotyped to like only boybands and popstars, Jinny Saw Zhi Ying was very much into ­robotics. That interest soon ­developed into aeromodelling, and not long after, she was making, ­flying and racing drones.

Saw, now 19 and an IT student, was one of the drone pilots who represented Malaysia at the recent FAI (Federation Aeronautique Internationale) World Drone Racing Championship in Shenzhen, China. She says making drones lets her apply what she learned from STEM (Science, Technology, Engineering and Mathematics) subjects, which have always interested her from a young age.

“My IT course is definitely ­helpful when it comes to making drones as I am already used to working with software and doing a lot of coding, so I can configure and customise my drones easily,” says Saw.

But even if a person has no ­interest in STEM subjects, dabbling with drones could change that, says Malaysia Unmanned Drones Activist Society (Mudas) executive secretary, William Alvisse.

As members of the National STEM Movement, William and his 19-year-old son Daryl Alvisse have been using drone-making to encourage more youngsters to be interested in science and technology.

The movement works closely with a number of ministries, including Science, Technology & Innovation, as well as various industry partners, to nurture ­greater interest and understanding in STEM subjects among primary and secondary school students.

“The decline of students in the science stream in secondary schools across the nation is quite alarming, and this in turn makes an impact at the higher-education level,” says William. 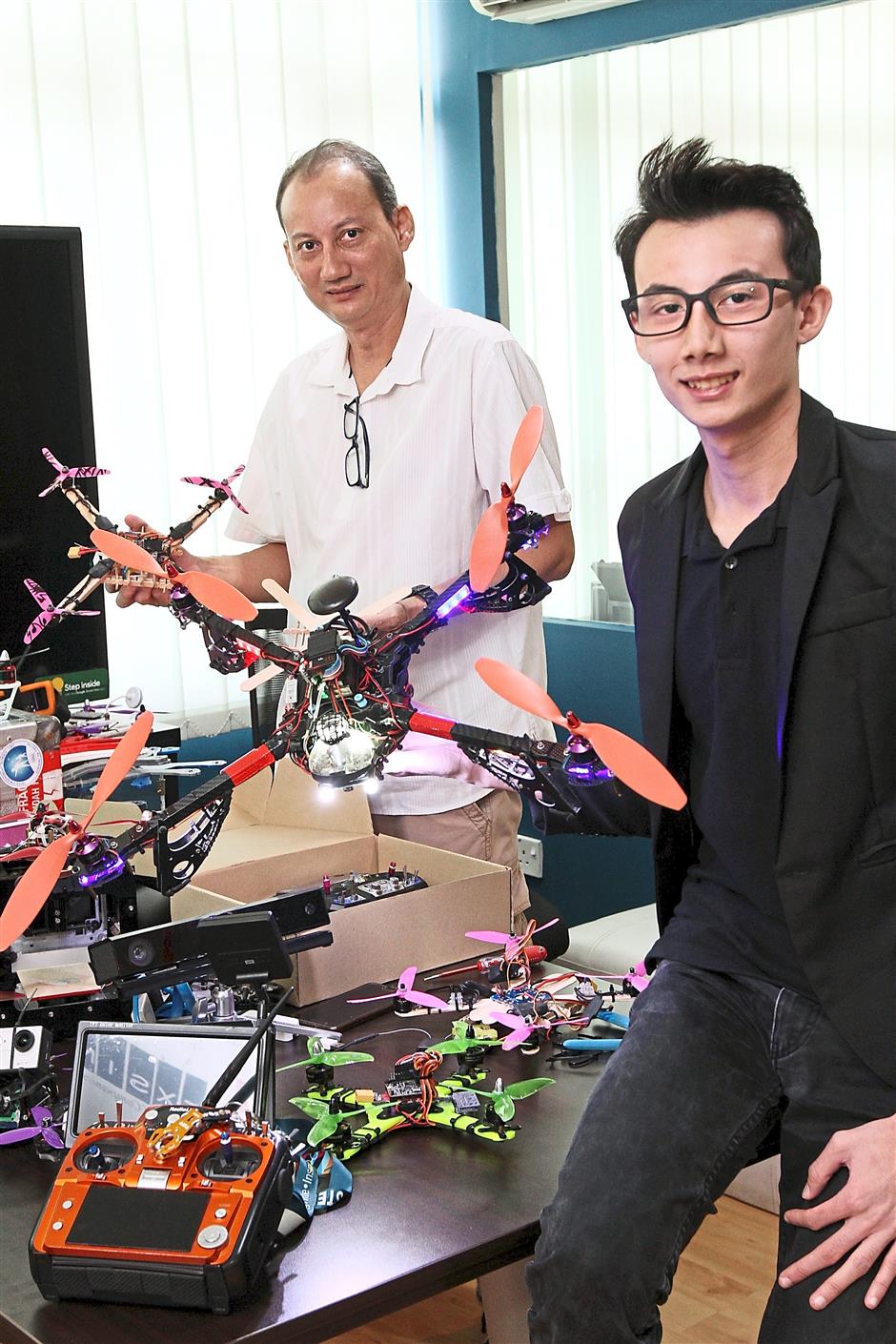 William (left) and Daryl use drones to teach kids about science and technology.

According to the Education Performance and Delivery Unit in the Education Ministry (The Star Online, Oct 21), Malaysia is seeing a steady drop in student enrolment in the science stream – the number of Form five students studying science subjects has dropped an average of 6,000 per year since 2012.

It also states that the number of students enrolled in the science stream is only 167,962 out of 375,794 this year. Also, more than 48% of Sijil Pelajaran Malaysia (SPM) candidates have failed to obtain a grade of C for Additional Mathematics, a prerequisite to enrol in STEM undergraduate courses.

“There really needs to be a ­balance between arts and science stream students,” he says, adding that kids who are interested in arts subjects could have a misconception that they have to let go of their passion if they pursue science ­subjects.

William believes that young ­children should be exposed to STEM at an early age, and that DIY drones is one way to get them interested.

“From my own experience, when I ask engineers why they do what they do, most of them answer that their parents introduced them to something interesting in science and technology and it stuck with them,” he says.

“Kids nowadays are very smart. They need to get hands-on ­experience to be excited about STEM, and one way is by getting them to build drones.” William through his Tinker & Invent movement conducts many drone-making workshops across the country, and even works with the Malaysian Digital Economy Corporation (MDEC) to organise its workshops at the MyDigitalMaker fairs.

Usually, William and Daryl teach the participants how to make their own drones using ice cream sticks.

“There are various drones on display at our showcases, including high-tech ones from our partners that use carbon fibre or 3D printer frame, but the kids are almost always interested in the DIY ice cream stick drones,” he says.

At the recent MyDigitalMaker fair in Kuala Lumpur, William organised about six workshops over the course of two days, ­teaching children as young as six how to make and fly their own drones.

According to Daryl, there isn’t an age limit to learn how to make drones, although parents and guardians are encouraged to guide the younger ones through the ­process. William says children as young as six have attended his workshops to build their own drones.

The workshop teaches ­participants to build the drone’s frame using ice cream sticks, put together the components – from the controller to the motors – and introduces them to basic coding. They then get to fly the drone they built and programmed.

William adds that when keen participants get on the DIY drone bandwagon, they usually want to build more complex drones which will require even more knowledge to make their vision come true.

“When they go back, some would buy more components online and build their own drones. Some would even use carbon fibre and other more advanced ­techniques to make their drones,” he says. “This requires more advanced STEM knowledge, and it’s a win-win situation for all.”

Your drone, your way

There are many uses for the drones you build – from racing to just leisure. Amir Haziq Saiful Rijal uses them to race competitively in local and international ­competitions.

Amir also represented Malaysia at the championship in China, and hopes that it would get as much recognition and support from the government as eSports. “It should also be introduced in schools because students can learn many things like electronics and even broaden their creativity. Making drones requires knowledge in science and technology because we have to understand how it works,” adds the 24-year-old ­electrical engineering student.

A racing drone can cost about RM1,000 to RM5,000 to build – and that includes a good, reliable pair of goggles. Racers will also need to invest in video transmitters, ­antennas, lots of batteries and good chargers. Some pilots also attach GPS or GoPro cameras for their freestyle sessions so they can record videos and edit them later.

Pilots are also advised to install high intensity LEDs at the front and rear of their aircraft to ensure that the drones are visible, ­especially in low-light situations.

Although there are many drone building tips available online, it isn’t the same as having someone guide you through the process of making your own drones and improving them along the way, says Saw. A racing drone can cost about RM1,000 to RM5,000 to build – and that includes a good, reliable pair of goggles. — AZMAN GHANI/The Star

“I’ve done a lot of experimenting before and have built two proper drones. I don’t make them for ­others or sell them, but I do help people with soldering and fixing, if needed,” she adds.

Saw and Amir rely on their drone racing coach Shah Johan Mohamed Khair to improve their drones and make them competition ready. Shah Johan, who also races drones competitively, says that there are many elements involved in building racing drones.

You have to understand the ­science of drone aerodynamics; the technology behind high-tech ­components such as the ones used in flight controllers, including radio transmission to communicate with the drone; and learn programming to make the electronic parts work, says Shah Johan. 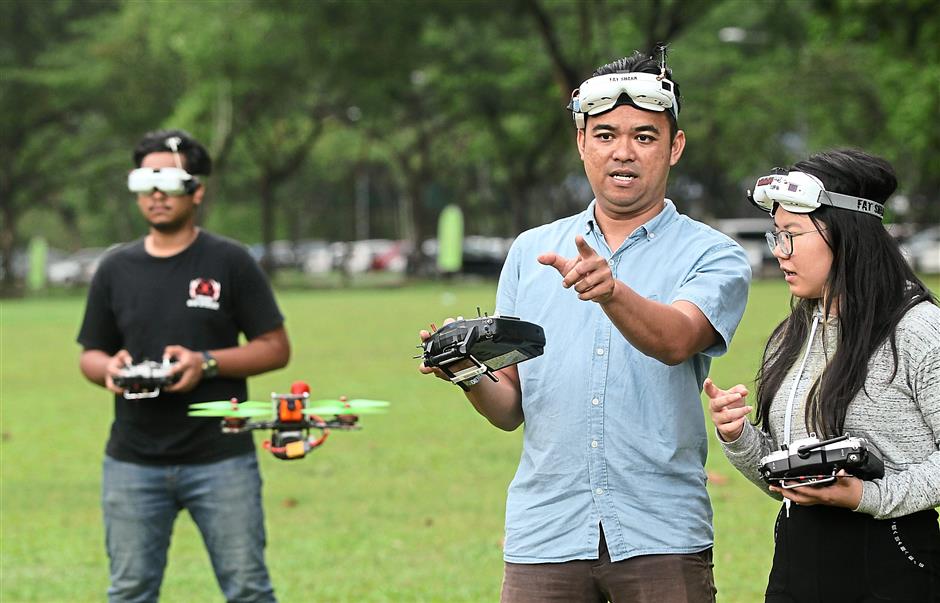 Saw (right) and Amir (left) rely on their drone racing coach Shah Johan to soup up their drones and make them competition-ready. — AZMAN GHANI/The Star

“Engineering knowledge will help you choose the right frame and electronic parts to build the drone, and mathematics is handy for calculating the right size for the propellers, battery and frame which will affect flight time,” he adds.

Apart from making drones for racing, Daryl also builds drones to take aerial photography. As he has access to 3D printers and laser ­cutting machines, he often ­experiments with materials used to make the frames, even adjusting the shape and size. For more ­complex drones, he works with different components, like Arduino or Raspberry Pi, which require him to master different computing skills.

“It really is easy to customise your own drones with the right tools and knowledge. There are so many open source programs online, which you can use to configure your drone,” adds Daryl.

Drone making could lead to other occupations like drone ­piloting, says William.

“I am always getting phone calls from industry experts looking for drone pilots. There really is a demand for them out there right now,” he shares.

To push drone piloting as a ­viable career option, William signed a memorandum of ­understanding with HELP University last month to come up with a programme for a drone academy.

More details about the drone academy will be made public soon, he says.

“I am also collaborating with the Ministry of Human Resource, under the National Occupational Skills Standards, to come up with a drone piloting curriculum so kids who come out of school can do a course that lets them become a professional,” he says.

“There is a career waiting for them, and it all started with their interest in making drones out of ice cream sticks.” 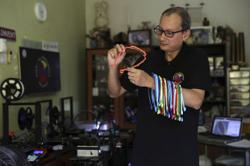