iPad Pro test: Is this tablet superhero ready to replace your laptop?

The new iPad's display quality is brilliant, which is mostly due to the use of DCI P3 colours, which allows for a much larger colour spectrum than ever before. — dpa

Apple's newest iPad Pro is definitely the most powerful tablet on the market – it's actually even faster than 92% of available notebooks. With its A12X octa-core processor and a massive storage capacity of up to one terabyte, this device can only be described as the superhero of tablets.

So should we leave laptops behind and get ready for a futuristic, tablet-only lifestyle? The iPad Pros are impressive, but they're not cheap.

Nevertheless, no matter what size you pick, when using the Pro, you never feel like your even getting close to reaching the tablet's limits in terms of performance – whether your playing Fortnite or editing 4K videos.

The Pro's display takes up almost all the screen, and, unlike the latest iPhones, has no notch. The very thin edges around the screen have space for one thing only: the camera and sensors for FaceID, which is the only way to unlock the Pro, as there is no fingerprint sensor at all.

The display quality is brilliant, which is mostly due to the use of DCI P3 colours, which allows for a much larger colour spectrum than ever before.

The display resolution for the 11-inch tablet reaches 2388 x 1668 pixels, the 12.9-inch Pro has 2732 x 2048 pixels. This really makes all the difference when watching anything on Netflix, Amazon or iTunes – however, YouTube videos are not shown in the highest possible resolution, because Apple does not support Google's Video Codec VP9.

The new iPads can sense how much power you currently need, and adapt accordingly to provide you with adequate performance whilst protecting the battery life.

The Pro tablets also have a new design, which is reminiscent of the iPhone 5 with its curved edges. The curved designs allows the iPad to fit more comfortably in your hands, especially during prolonged use.

The iPad Pro has an improved 12 megapixel camera, but still has no image stabilisation technology. 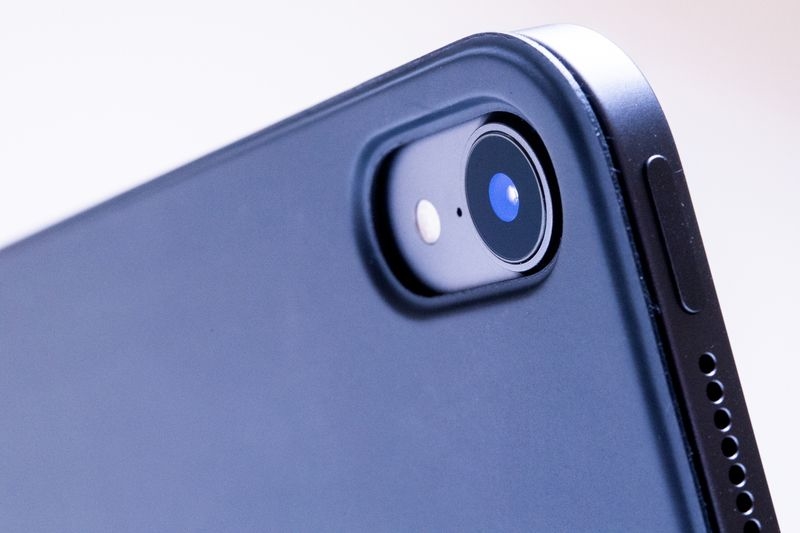 The iPad Pro has an improved 12 megapixel camera, but still has no image stabilisation technology.

The new devices have a USB-C port, which means you can connect the tablet to your computer, and external display or any other accessory. However, Apple has got rid of the headphone jack, so you might need an adapter for your headphones, if you haven't gone wireless already.

In terms of accessories, Apple has also made some significant improvements on this front.

The new keyboards are more stable on the go, and if you're outside of the United States, they also come with European layouts – no more QWERTY if that's not what you're used to. The external keyboards cost US$179 (RM746) for the 11-inch tablet, and US$199 (RM829) for 12.9 inches.

The Apple Pencil has gone through a complete redesign. The new pencil can be charged wirelessly simply by attaching it to the outside of the screen, where it sticks magnetically. If you're a creative professional, the pencil can definitely become an invaluable tool. For other users, it may not be as useful, as switching between applications and tabs with the pencil is not perfectly smooth. The Apple Pencil can be bought for US$129 (RM538). The new pencil can be charged wirelessly simply by attaching it to the outside of the screen, where it sticks magnetically.

So, will we all be moving to tablets like the iPad Pro as laptop computers become obsolete?

Well, no. If you work in the creative industry, then maybe a tablet really is all you need – and this is most certainly the best one out there. But for most people, the iPad cannot replace the efficacy of doing some things with a mouse. So don't go throwing out that laptop just yet. – dpa