Repair rather than dispose your gadgets

Lam outside the The Garage KL, one of two places the KakiRepair programme is hosted. — Photos: KakiDIY

Instead of discarding your faulty gadgets, fix them yourself by attending the free KakiRepair workshops.

As electronics become more complex, the answer to what to do with a busted piece of hardware is increasingly becoming “just toss it”.

DIY advocate Johnson Lam reckons that planned obsolescence is a growing trend but that doesn’t mean users have to play along and feed the beast of consumerism.

“Yes! Most electronics these days will spoil right after their warranty expires. I think it’s planned that way to boost the economy and stuff like that,” claims the KakiDIY founder. 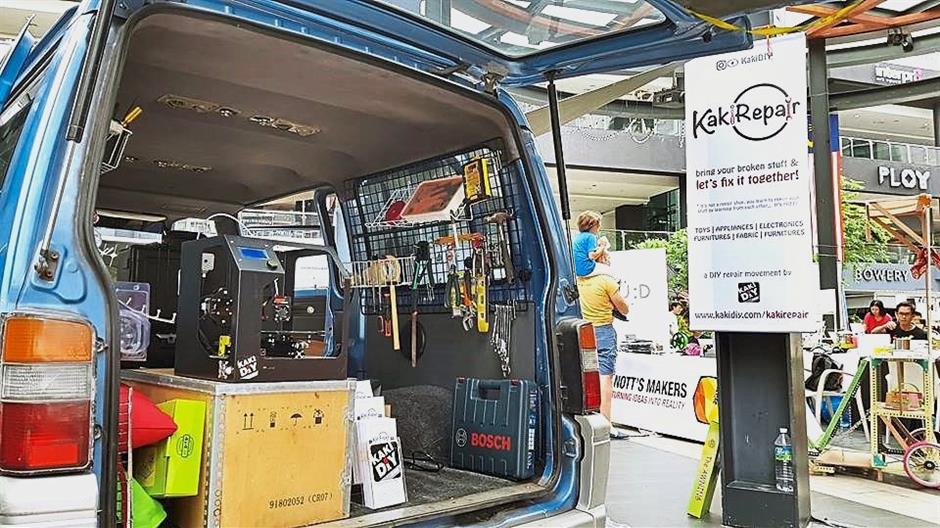 KakiDIY will be reaching out to wider communities using their MakerVan, a makerspace on wheels.

To provide an alternative, he kicked off the KakiRepair by KakiDIY programme, a one-day class that brings together people with damaged items and those from the DIY community and gets them to work together to fix the devices. Plus, it’s completely free.

He says attendees could expect to meet members of DIY ­communities and learn about basic electronics and how to work with household tools – like soldering irons, wire cutters, screw drivers, wrenches – which would be provided by KakiDIY on the day.

The programme runs for about four hours, and is held every two weeks, alternating between KakiDIY’s makerspace in The Garage KL, Ampang and The School in Jaya One, Petaling Jaya.

Lam says the most common things brought for fixing were ­laptop adaptors, especially for Macbooks, plus zippers and ­fasteners for backpacks, and even the occasional oven. Lam takes a hands on approach when teaching how to fix stuff at the KakiRepair programme.

Asked what the most complex item he’d ever seen fixed at the programme, it was surprisingly a travel adaptor.

“Although it was a simple fix, all the miniature pins and springs popped out as we opened it. Fixing it back without a manual required lots of observation and trials,” he said.

Fixing things is only the first step for the programme, as Lam believes it isn’t the end of the road just because a gadget can’t be returned to its original state.

He explains that the ­programme has three steps: Step One to inspire people to fix things and enhance the skills for getting things mended; Step Two to ­encourage problem solving by upcycling things that can’t be fixed, finding new uses for junk or even modifying it to be something else; and Step Three to innovate by using existing resources to invent something new.

“For example, some light bulbs, an old toilet flushing tank and ­electronics can be made into an automated vegetable plot,” he says.

Though many have gotten into the business of third-party repair shops specialising in different brands of electronic gadgets, Lam says it is not that complex to fix things yourself.

He notes that repair ­professionals are also willing teach at the KakiRepair ­programme, feeling no ­compunction to hide trade secrets.

“For KakiDIY, knowledge is meant to be shared. Quality of ­service and a unique product offering is the main driver of our community’s specialist. Knowledge is easily gained anyway, so a real good business comes from other things,” he says.

Lam himself is driven to teach as it touched him to see the faces of satisfied people learning ­something new or getting to solve their own problems. KakiDIY will be launching a 13-episode series on RTM to encourage the DIY and upcycling culture.

“Moreso in today’s digital world where fundamental skills like Kemahiran Hidup (Life Skills) is no longer being taught in schools. It drives me to do more,” he says.

Moving forward, Lam reveals KakiDIY will be focusing more on growth and scalability as a community over the coming year, reaching out to wider communities using their MakerVan, a ­makerspace on wheels.

They would also continue ­building on their core Makerspace in The Garage KL, Ampang and The School in Jaya One, Petaling Jaya; and launch a new Life Skills Programme in the Makerspaces.

KakiDIY also hopes to make a leap to TV by launching a 13-episode series on RTM that would teach viewers about upcycling junk, doing mini projects using household things and giving tips on being eco-friendly.