Watch out, GoPro: everyone else is catching up at lightning speed, making for amazing footage from even more angles than we ever thought possible.

New gadgets to capture your adventures, including the just-released Kodak PicPro, offer a variety of shapes and functionalities.

Small enough to be carried anywhere, but intended to capture 360° of HD footage from a stable surface, the Kodak PixPro SP360 Action Cam could mean the end of wobbly footage that wearable cameras just can't shake.

Its features include motion detection, which allows the camera to start recording upon detecting the motion of a deer in the woods, for example. It also offers 10 frames-per-second multi-burst shooting and its corresponding app allows users to edit and fine-tune their takes, toggling between viewing options and selecting frames to make still photos.

Although the US$349 (RM1,168) camera is dome-shaped, users have the option of capturing footage from a variety of perspectives including ring, panoramic, 180° from the front and rear, and global perspective.

Wireless and near field communication (NFC) connectivity let users film from afar using the app to communicate with the device.

The US$199 (RM666) RE from HTC is not only simple and easy to use with just one button, but it can be purchased with a variety of gear that makes it attachable to the darndest of places. The RE from HTC looks like a submarine spy camera.

Not only can it capture fun on the mountain, it can capture the fun in the pool at the lodge after skiing, for it's able to film while submerged at depths up to one metre.

Do not attempt to film while skiing unless the RE is strapped to gear, leaving your hands free.

Other portable cameras that offer a 360° perspective include the Bubl Cam, which has a tetrahedral design that captures footage using the combined efforts of its 4,190 lenses. 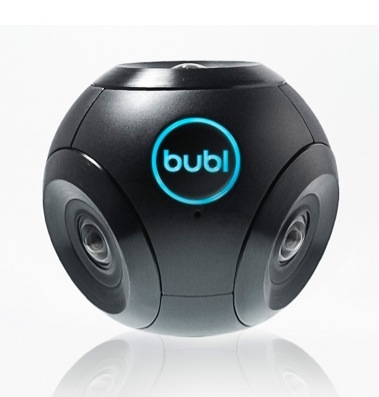 With its tetrahedral shape, bubl cam suggests the form of a disco ball, but it's a 360° camera.

It won't be ready until spring 2015, but for those who'll still be on the slopes, there's nothing like sunny skies in the mountains to make for good footage.