It is now official. Google has named its latest version of its mobile operating system, the Android 4.4, KitKat.

The move comes as a huge surprise, especially to Android fans who had expected the company to move straight to Android 5.0, Key Lime Pie.

However, Google has maintained version 4, KitKat being version Android 4.4.  The previous iterations 4.1, 4.2, 4.3, were all named Jelly Bean.

According to The Verge, Kit Kats have long been the favourite of Android engineering head Hiroshi Lockheimer. His Gmail avatar was once a KitKat icon and he also had his entire office door decorated with KitKats at one point in the past.


Android's new OS KitKat name, however, varies slightly from the chocolate wafer, spelt with a space in between the two words, ie. "Kit Kat."

However for those wondering if Google has infringed the trademark of Nestle, which owns the name           “Kit Kat”, Android global partnerships director John Lagerling said this to BBC: “This is not a money-changing-hands kind of deal” but instead he said, the idea was to do something “fun and unexpected”. 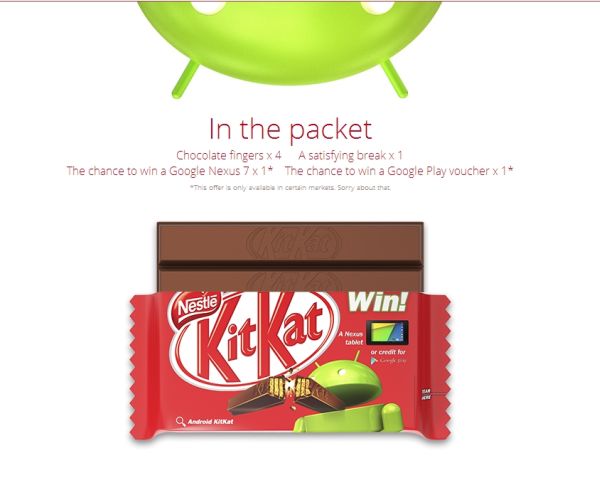 According to a press statement by Google, to mark the release of Android KitKat, more than 50 million specially branded Kit Kat chocolate bars will be available in 19 countries including Australia, Brazil, Germany, India, Japan, Dubai, Russia, the United Kingdom and the United States.