Advance the attack: You will gain more powerful spells and attacks as you progress through the game.

Be prepared to give up your time to the addictive action RPG, Soul Sacrifice on the PS Vita.

THE PS Vita is in dire need of quality games as the release schedule has been very quiet as of late.

Fortunately, Soul Sacrifice has arrived on the portable handheld system, much to the delight of players looking for some monster slaying action.

Unlike many other PS Vita titles that are ports of popular franchises, Soul Sacrifice is a brand new title from the creative mind of Keiji Inafune, the man behind Megaman and popular franchises like Onimusha and Dead Rising.

Explore a world with no hope

Set in a bleak desolate world ruled by a mad sorcerer named Megusar, you play as a poor prisoner on death row. Fortunately, your luck may have turned as you inherit a magical sentient book called the Librom after its previous owner meets his untimely demise.

The Librom acts as your guide, letting you relive the memories of an unnamed ­sorcerer to learn the ways of the sorcerer and ultimately grow strong enough to defeat Magusar.

Keeping to the storybook ­aesthetic of the book, the game’s story is mostly told through ­chapters documenting the ­journey of the unnamed ­sorcerer.

After the long introductory first chapter, the game finally opens up more side missions and multiplayer mode.

While it is understandable that the game wants to teach players the ropes, it is still too much to ask for players to sit through an entire chapter before being able to play online.

The story is by no means a masterpiece but there is enough to hold your interest. But, the main star of the game are its many side missions that keep you coming back for more.

The various types of monsters that you encounter, especially the larger archfiends, provide a decent amount of challenge as you need to analyse their attack patterns and identify their weaknesses.

There is more to ­fighting than just ­mashing buttons and hoping for the best. Success largely depends on customising your character to suit your playing style by mixing and matching the different magical items and abilities that you can carry into battle. These include spells that let you transform your arm into giant blades, turn your skin rock hard or fire magical arrows at your foes.

Fighting for the most part is enjoyable. The Vita’s dual analogue sticks offer great control but the experience is slightly marred by a wonky lock-on system that blunders whenever you fight multiple enemies.

As you gain more magical items after each battle, you will be able to combine them to make them more powerful and also craft new spells from those that you have collected.

Despite the repetitive nature of the battles and side missions, I was strangely drawn to continue with the side quests to increase my sorcerer’s powers and face the increasingly difficult archfiends.

The game can mostly be played solo but when the action gets too monotonous, the game’s multiplayer mode provides a refreshing relief as you can fight with up to three other friends. Matchmaking is fluid and the gameplay is more or less identical to what you are used to in solo play.

However, you cannot tackle story missions with friends — instead you are limited to a set of side missions. Still, there is a sufficient amount of challenge and fun to be had as you tackle the game’s large monsters. 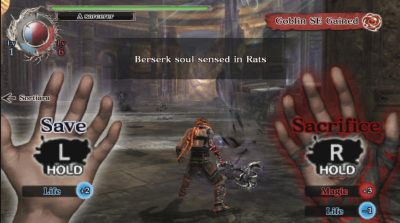 Your call: After beating creatures to within an inch of their life, you can either save them to regain some health or sacrifice them for more attacking power.

As the title of the game alludes to, the ­concept of “sacrifice” plays a major role in the game’s story and core gameplay.

When you have beaten a monster to within an inch of its life, you are presented with a choice of either saving it, which partially restores your health, or sacrificing the foe, which increases your offensive magic meter.

When fighting alongside computer ­controlled characters or other human players online, you can choose to sacrifice downed players to unleash a devastating spell to run down a difficult boss’ health bar.

The same effect also applies to you, so don’t be alarmed if your multiplayer friends suddenly decide to sacrifice you just to kill the boss.

Should the going get too tough, players can rely on powerful Black Rite spells to clear an area of enemies and deal tremendous damage upon your foes. But it comes at a high price as your defences may be halved or it may greatly impair your vision.

You need not fight alone in Soul Sacrifice as most of the time you are partnered with an AI controlled character. For the most part they are smart enough to take on the smaller ­monsters on their own but when it comes to the bigger monsters, they don’t fare as well.

It has been a good long while since we sunk our teeth into a decent action RPG and Soul Sacrifice is just what we needed.

As repetitive as the action may be, the game’s battle system kept us coming back for more as there is a strange attraction to completing missions and fighting tougher enemies.

Whether you are fighting alone or online with friends, there is much fun to be had in Soul Sacrifice. It is just a matter of how much time you want to sacrifice to the game.

Cons: Slow start before the game opens up; missions can get repetitive after a while.

Action RPG for the PS Vita