Fuji’s latest mirrorless trims the fat but not the specifications.

FUJI seems to be on a fast track to create a family of X-series interchangeable lens cameras.

That’s all the better for consumers of course, since Fuji is now catering to almost every segment of the market with cameras at different price points.

The X-M1 is a decidedly budget camera. However, the camera boasts the same excellent 16-megapixel X-Trans sensor as the X-E1 but drops the electronic viewfinder (EVF) feature for a tiltable external LCD instead.

However, the X-M1 does have a trick up its sleeve — it comes with built in WiFi connectivity and can be used together with a PC or smartphone with the appropriate software installed.

Fuji’s implementation of WiFi is a little limited, however, as you will see later in the review.

Taking the X-M1 out of its box, I was struck by how small and lightweight it was — its body size was not much bigger than the fixed lens x20 and with the same design cues and black leatherette finish.

This is quite an achievement when you consider that the camera has an APS-C sized sensor and is fully compatible with all of Fuji’s X-mount lenses.

The X-M1 is supplied with the XC 16-50mm f/3.5-5.6 OIS kit lens, which is also remarkably small although it’s not really pocketable, (unless you have large pockets).

However, it is light enough that you could easily slip it into a handbag or “manbag” without feeling the weight.

The camera is largely made of plastic and sounds quite hollow when you tap the body, but the build quality itself is good and everything seems well put together.

The tiltable 3in LCD screen on the back is much like most modern mirrorless cameras — it tilts upwards and downwards but does not rotate.

The screen is not touch sensitive but Fuji’s excellent Q menu is already quite easy to use when you want to access all important settings. 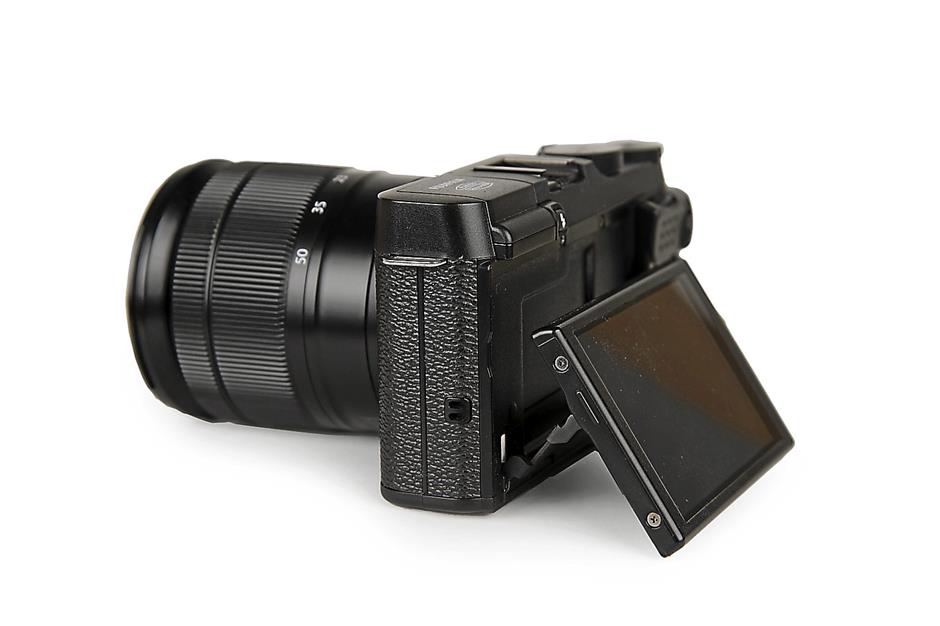 Move it around: The X-M1 has a 3in tiltable LCD screen.

Fuji has also managed to squeeze in a pop-up flash, and the design of the hinge allows you to hold the flash so it faces upwards for bounce flash. The flash is not very powerful but if you crank up the ISO a little bit, it should actually be usable for bounce.

One constant annoyance with the Fuji X series is that if you want to focus close, you still need to engage Macro mode.

While I understood the need for this with the X100S, which had to engage the more accurate electronic viewfinder instead of the optical rangefinder at close distances, it doesn’t really make any sense with the LCD-only X-M1.

The X-M1 has two control dials which both fall under your right thumb.

The X-M1 works very well when shooting in a variety of situations — speed of autofocus is good and it works well even when shooting videos.

Unlike the X100S, which has built in pixels for phase detect ­autofocus, the X-M1 relies exclusively on contrast detect, so it does need to rack the focus in and out a bit to find focus, but it’s relatively fast in bright light and only does some searching when light levels are low. 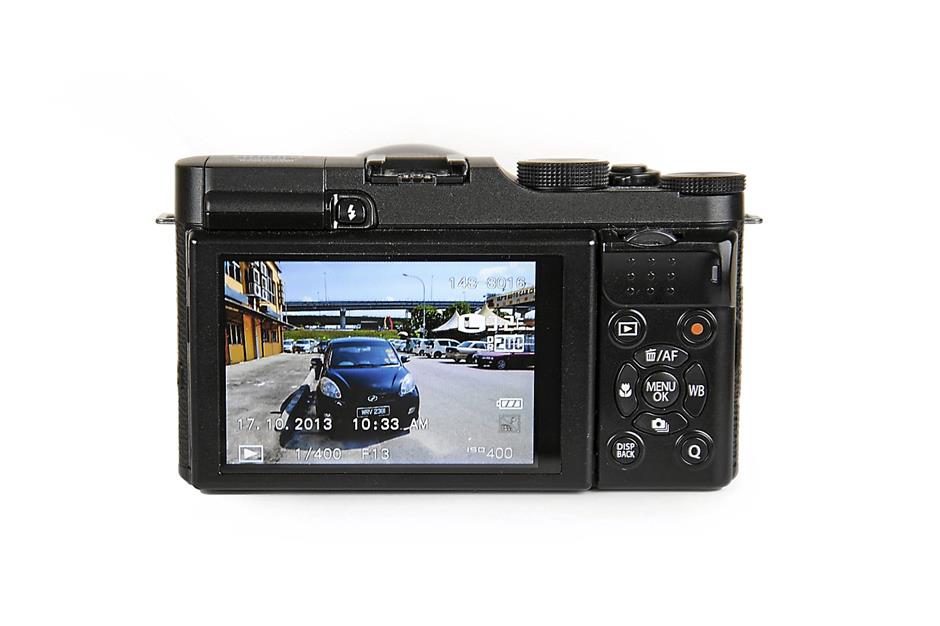 Control centre: The X-M1 has a conventional button layout similar to other Fuji cameras, except for the addition of an orange dedicated video recording button.

The X-M1 is the first Fuji X Series camera to actually come with a dedicated movie record button on the back — on other models, movie record was a little bit of a hassle to get to, honestly.

Unfortunately the camera doesn’t have a built-in port for attaching an external microphone nor does it have a headphone jack for audio monitoring.

WiFi is increasingly becoming an important feature in cameras and the fact that Fuji has opted to add it to the X-M1 is great.

The only problem is that the WiFi only works for transferring images to your smartphone or PC but does not extend to controlling the ­camera.

In fact the implementation of WiFi here is rather clunky and while it works, and despite the FN being labelled as WiFi button, it wasn’t obvious how to turn on. 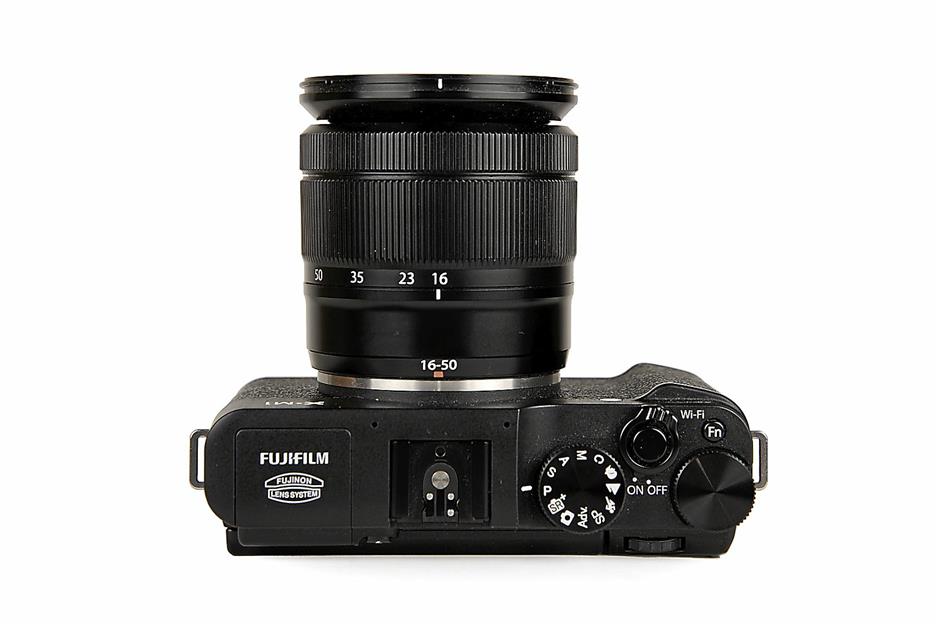 You see, in shooting mode the FN button is mapped to ISO or any number of features of your ­choosing, except WiFi.

It turns out that the FN button only turns on WiFi when you are in playback mode where a pop up menu will open allowing you to choose and transmit images to your smartphone or PC.

Talking about flash, there’s a strange quirk with this camera — if you turn on the X-M1’s silent mode, it will not only deactivate sounds but will also disable the flash no matter whether you have it popped up or not.

It’s a bit strange to have silent mode also affect flash ­function since the flash in the X-M1 has a physical switch to pop it up and any photographer who is using silent mode will never accidentally pop the flash up.

Being mostly the same X-Trans image sensor as the X-Pro1, the X-M1 produces some excellent images.

Not only were images amazingly sharp, high ISO performance was also pretty excellent.

In fact the X-M1 produces ­perfectly usable results from ISO200 all the way to its normal maximum of ISO6400.

It’s only in ISO boost mode that you get noisier and softer results.

The camera also comes with in-camera RAW conversion so you can shoot in RAW and then tweak the settings and convert to JPEG right in the camera.

In camera RAW conversion isn’t unique to the X-M1 — many DSLRs and more expensive mirrorless cameras have it but it’s certainly a welcome feature on a camera of this level and price range.

Also, like other Fuji cameras, the X-M1 also has colour profiles to mimic the company’s famous films, such as Astia, Provia and Velvia — pro photographers will be ­familiar with these names.

You have to hand it to Fuji — the X-M1 is a surprisingly small, yet feature-packed camera for the price.

In the time I had it, I quite enjoyed using this little camera — it was small, worked well, and looked good.

Underneath its old-fashioned retro looks beats the heart of a modern mirrorless camera with many “pro” features.

Couple that with Fuji’s ever increasing range of excellent XF and XC mount lenses and you have quite a strong contender in the ­mirrorless market.

Pros: Small and lightweight; Great image quality; RAW shooting and conversion right in camera.
Cons: WiFi is a bit basic and clunky to use.