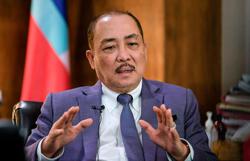 PETALING JAYA: The Ministry of Human Resources, along with the Social Security Organisation (Socso), has paid a home visit to heirs of the late K. Vijaya T. Veerasamy, 52, who passed away in May following brain complications that arose from an accident last year.

“As I was genuinely worried about his condition following the accident, I personally paid him a visit at the hospital last November to provide him his Socso benefits.

“The cost of his implant operation amounting to RM23,000 and subsequent treatments were also fully borne by Socso,” he said.

He added that the deceased’s case was closely monitored by the case manager of the Socso Return to Work (RTW) programme and found that K. Vijaya was eligible to receive assistance under the rehabilitation program for three months. Following his passing on May 21 this year, Socso quickly found out that the deceased had been a general worker who had contributed under the Employees’ Social Security Act 1969 (Act 4).

This allowed his heirs to receive benefits under the Employment Injury Scheme.

“Despite these benefits being paid three months ago, I still felt compelled to visit his family at their home, following his passing,” he said.

M. Saravanan later presented a Socso care basket to the family of the deceased.

Socso similarly conveyed their condolences and sympathy to the heirs and hoped the benefits provided could lessen their burden in carrying on with their lives.

The late K. Vijaya sustained severe traumatic brain injury after being involved in an accident, when returning home from KL on April 12 last year.

This saw him having to undergo surgery on the left side of his skull, alongside receiving subsequent treatment at Hospital KL, before taking his last breath in May this year, 13 months after the accident.

As both daughters were still pursuing their education, they were eligible to receive as much as RM2,232 monthly under the dependant’s benefit, along with a funeral benefit of RM2,000. 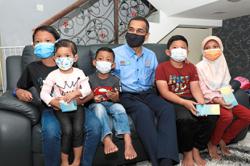 Money at your fingertips
Want to save 20%+10% on your car insurance? Here’s how
THE WAY TO SUSTAINABLE INVESTMENT
Steeling the hearts of the community
Foamy Urine May Mean Kidney Disease
Join in the SCxSC 2021 for latest trends on fintech in the capital market
Dive into Longines HydroConquest’s new two-tone look
When a child fever becomes critical
Banking at your fingertips made easy via CIMB Clicks
Is blue light from digital screens harmful to eyes?