KPJ Healthcare celebrates its 40th anniversary this year, serving the nation as one of the largest private hospitals by bed count of some 3,000 beds and counting.

Starting out as a single hospital in Johor Baru, the public listed company now manages a network of 28 hospitals locally with overseas presence in Indonesia, Thailand and Bangladesh.

According to former KPJ managing director Tan Sri Siti Sadiah Sheikh Bakir, state-owned conglomerate Johor Corporation (JCorp) through Johor Specialist built its first hospital in 1979 and opened its doors to the public in 1981, with no plan for expansion then.

“The hospital was running well but neither Johor Specialist nor JCorp thought about venturing beyond the Johor border until an offer was made by the then Public Enterprise Ministry through Bank Pembangunan Malaysia Berhad (BPMB) to take over the hospital in 1987,” she says.

“We were also kindly approached by the late Datuk Dr Hussein Awang – one of the founders of Tawakkal Hospital – and his father, former Penang governor Tun Dr Awang Hassan, to ensure that the hospital continues to provide services and facilities to those in need.

“Both father and son were medical practitioners and patient-focused. They were not going to easily hand it (the hospital) over unless the good work can be continued.”

A year later, KPJ made its way to Kuala Lumpur with the group’s first hospital acquisition now known as KPJ Tawakkal Specialist Hospital.

Tawakkal Hospital began when Dr Hussein, then the head of urology at the General Hospital KL, saw the sprouting of private healthcare and was inspired to fill a growing need in the 1980s with his two co-founders – anaesthesiologist Dr A. Sapanny and the late cardiac specialist Datuk Dr Nik Zainal Abidin Abdul Rahman.

According to Datuk Azzat Kamaludin, cousin of the late Dr Hussein and a former board member of KPJ, Dr Hussein spearheaded this move with a little help from a developer friend who aided in the purchase of several shoplots facing busy Jalan Pahang in Kuala Lumpur.

Being one of the first few private hospitals in Malaysia, he says, its name “tawakkal” was derived from Dr Hussein’s grandfather’s house in Johor Baru and also a family clinic in the same state, which means “trust in God” in Arabic.

In 1984 the hospital was run by specialists and doctors and offered a mere 66 beds.

Azzat shares that during the economic recession of 1980s, Dr Hussein realised there was room for investors to manage the business side of the hospital.

With JCorp running the hospital while medical specialists focused on healthcare, Tawakkal Hospital stood the test of time and in 2010 expanded to a 200 bed count facility which made the operations outgrow the current landmark of a building, he says.

Dr Hussein was again part of the expansion and his same developer friend helped in building the current KPJ Tawakkal Specialist Hospital which is currently situated behind its former shoplot-like hospital that now serves as a senior living care centre known as Tawakkal Health Centre.

“Dr Hussein played quite a pivotal role in helping to look for a new site,” Siti Sadiah concurs.

Recalling that the former hospital was like a maze, she says: “When we brought in the planner and designer, he and his team gave a lot of input on the type of hospital we should build.”

“As more doctors joined the centre (and with the KPJ acquisition), from six shoplots we expanded to 18 shoplots in six years. Then 11 years ago, we decided to expand and construct a purpose-built hospital.

“Dr Hussein was selective in picking his team, and we were basically all the senior specialists from GHKL,’’ he says, adding that Dr Hussein began this journey to provide quality medical care at a reasonable cost and to relieve the pressure on public hospitals.

“He (Dr Hussein) would always say we are doctors first and money comes second. He was a charitable person who gave reduced charges to those who couldn’t afford private healthcare and ensured that they were not overcharged. 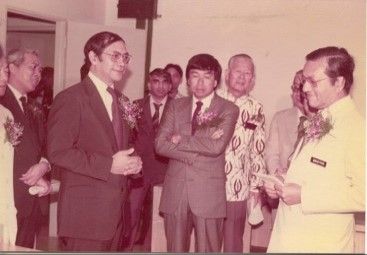 Dr Hussein (left) with Dr Mahathir and the then Raja Muda and now the Sultan of Selangor, Sultan Sharafuddin Idris Shah Al-Haj (centre), who graced the opening of Tawakkal Hospital in 1983.

He was a good man

Remembering him fondly, Dr Sapanny says: “Dr Hussein was a towering personality and a leader among men.”

A pioneer in the local urology field, the late Dr Hussein helped form the Malaysian Urological Association in 1974 and was the first surgeon to perform a renal transplant in Malaysia in 1975.

“I was his anaesthesiologist. We were nervous as it was the first renal transplant in Malaysia. We didn’t have YouTube back then,” Dr Sapanny laughs.

The transplant was a success.

“(Dr Hussein) was humble, gifted and passionate about his work. He would always say, ‘Treat every patient as your family member and give them your best regardless of race and financial status. Look after them, for you are lucky you have the gift to treat sick people’,” he says.

“He was a doctor and a gentleman,” Dr Hussein’s cousin Azzat adds.

“He had wonderful bedside manner, was brilliant in his work, and very considerate and caring.

“He would follow up with his patients after they’ve been discharged. He was not in it for the glory; he always did what he felt needed as a doctor,” says Azzat.

“He was kind and helpful especially with his patients and told me to always help out when patients were not able to afford private healthcare.

“He was approachable and kind and treated me as an equal even during my junior years,” says Dr Chan who joined Tawakkal in 1985 as a physician and is still practising there after some 30 years.

“Everytime at the dining table, it was always about medicine and how he treated patients and how well they were doing,” he says.

As for his late elder brother Dr Hussein, Dr Yahya says he was close to him as they were both doctors.

“I looked up to him. He was a doctor I respected,” he says.

Dr Yahya remembers his late brother as an all-rounder who shone in academics and sports, especially Australian rules football and cricket when he was in Melbourne Grammar School.

“Later in his years, he was an avid golfer and I played with him at the Royal Selangor Club. He was very good and I was happy that he invited me to play with him.”

“We try to make it annually since 2009/2010, among the cousins so we can all get together. We played around the country, but not anymore due to Covid-19,” he says.

The Covid-19 pandemic saw KPJ’s net profit for the nine months ending Sept 30, 2020 come in 33.1% lower than the previous year as a result of the impact of the movement control order.

By the third quarter and with the economy improving following the easing of the lockdown, KPJ’s net profit rose more than double to RM33.97mil.

“We were among the early players and we were able to grow because we had a good team,” says Siti Sadiah.

“I couldn’t have asked for more than what I had as managing director of KPJ. I had a good team with both clinical and non-clinical support. A strong team makes the business and patient care flourish,” she says.

With four decades of expertise and a resilient business model, KPJ is looking to expand its strategy – to bring healthcare services closer to the patient with the establishment of ambulatory care centres (ACCs) in selected community areas.

The award-winning private hospital group is set to open its 29th unit – the KPJ Damansara II Specialist Hospital – in 2022. Three reasons to get an outdoor water filter
De’Longhi and its new ambassador invite you to a perfect moment
Household name Haier honoured with Prestigious 2021 Malaysia Superbrands award
PRICE OF CHICKEN MEAT DROPPING
Get hyped up for Xiaomi’s new flagship range
Surface disinfectant to eliminate viruses and bacteria
OSK Property invites you to the MIRAculous virtual launch
The secret to success is to never stop learning
Celebrating 150 years of nourishing the younger generation
Pandemic Parenting Got You Feeling Blue?