The 22-year-old Dhabitah is not targeted for a medal but the underdog tag may just be the right motivation for her when she takes on 11 of the best 3m female springboard divers in the Olympics final at the Tokyo Aquatics Centre today.

She showcased a consistent performance in the semi-finals yesterday to advance into the top-12 women’s individual 3m springboard final as the sixth best.

Dhabitah was placed ninth after an opening dive of 63.00 points but a 65.10 in the second attempt saw her moving to fifth.

She then maintained her position in the top 10 with identical scores of 63.00 in the next two dives.

She managed only 58.50 in her fifth and final attempt but her position in the top 10 was never under threat by that time.

She made it to the women’s individual 10m platform in her Olympics debut in Rio de Janeiro in 2016 where she finished ninth.

Dhabitah is not expected to upset the fancied Chinese springboard divers Shi Tingmao and Wang Han, who are renowned for their superb consistency and strong entries.

Tingmao and Wang Han are expected to turn the final into a private battle after finishing first (371.45) and second (346.85) respectively.

Jennifer Abel of Canada, who took silver with Melissa Citrini-Beaulieu of Canada earlier in the week, was the best non-Chinese finisher with 341.40 points.

A podium spot is not beyond Dhabitah’s reach if she can rise to the occasion and nail all her five dives.

Dhabitah, however, is staying cool about her chances.

“Of course, every athlete will want to win an Olympics medal after preparing so hard,” said Dhabitah, who was pleased with her semi-final performance yesterday.

“But I don’t want to think about what to expect. I want to perform like I do in training and hope luck is on my side too.”

The outing yesterday was her best effort on the 3m springboard since she bagged bronze with a career-best 344.40 points in the World Series leg in London two years ago. 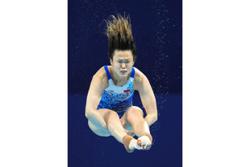