Justin vows to justify his promotion to senior ranks PETALING JAYA: The wait is over for Justin Hoh (pic).

The men’s singles shuttler, who was one of the most promising prospects from the junior squad, has been officially promoted to the senior ranks.

“The training intensity is much higher than in the junior team but I’m learning a lot from my seniors and the coaches,” revealed Justin.

The 18-year-old has yet to join full-training though as he has not made a complete recovery from a left shin injury sustained in the Malaysian International Series a fortnight ago.

“My injury is not too bad. Currently, my recovery is at about 70 per cent. I can’t attend full training yet,” said Justin.

“I’m looking to fully recover in time for the Malaysian International Challenge from Dec 13-18 in Ipoh as this will be my last tournament for the year.”

The youngster is not aiming high at the home tourney as he braces himself for a tough challenge.

“I’m not setting any targets for myself in this tournament as there will be more experienced players in the mix. But I will use this opportunity to gain experience,” said Justin, who is currently ranked No. 283 in the world.

Justin though, has vowed to go all out next year to break into the top 100 in the world.

“I’ve discussed with the coaches and they will be sending me for more tournaments next year to help me collect ranking points. I will go all out to break into the top 100 by the end of next year,” said a determined Justin.

Meanwhile, there will be a selection trial next week for the other juniors to determine who will join Justin in the senior ranks. 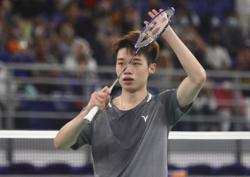