I’ll make you proud: Fazriq Razif is excited about his new journey in his bid to emulate his father Razif Sidek (pic, below).

PETALING JAYA: National junior shuttler Fazriq Razif has finally decided to follow the path taken by his legendary father by focusing on the men’s doubles.

And the 17-year-old Fazriq has been given a new partner, Wong Vin Sean, to realise his dream. 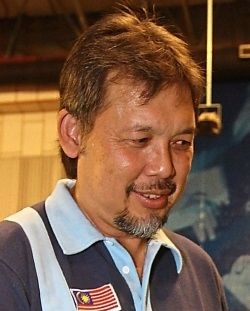 This means Fazriq’s partnership with Justin Hoh in the doubles is over as the latter has decided to concentrate only on the singles.

In the world junior rankings, the two are the best Malaysian pair, lying at fifth spot.

In their last tournament together this year, the duo went down in the second round of the Austrian Open, which was a senior tournament.

Fazriq said he was excited about his new journey in his bid to emulate his father Razif Sidek, who ruled the badminton scene in the doubles with brother Jalani in the 1980s and early 1990s.

“I’m still training in both the singles and doubles at the centre but I’ve made up my mind to choose the doubles,” said Fazriq, who is in the national junior squad headed by Datuk Misbun Sidek.

“I’ve been asked to play both for the time being in the junior ranks but it will be doubles all the way after this.

“As Justin is not keen on the doubles, I’ve started training with Vin Sean, who is also 17. Our first test will be the German juniors and we hope to get off to a good start,” said Fazriq.

The junior singles players train under Hazwan Jamaluddin while the doubles players are handled by former international Vountus Indra Mawan.