PETALING JAYA: Back-up singles shuttlers Shaqeem Eiman Shahyar and Wyman Goh have vowed to make their chances count as both are set for their long-awaited senior international debuts in Europe next week.

Alongside another teammate Lee Shun Yang, the three 20-year-olds have yet to play in any tournament despite being promoted from the national junior squad 20 months ago.

The Badminton Association of Malaysia (BAM) have entered them for three back-to-back events – the eight-tier Latvia International from Aug 26-29, eight-tier Hellas International in Greece (Sept 2-5) and seventh-tier Ukraine International (Sept 8-10).

Shaqeem, whose last international outing was reaching the quarter-finals of the World Junior championships in Kazan in November 2019, is aiming to justify the trip.

“I’m so happy that the wait is finally over,” said Shaqeem, who impressed in 2019 by winning both the national Under-21 and Under-18 titles.

“It has been tough to just keep training without having any tournaments to play and aim for. I found it hard to stay motivated.

“Fortunately, the coaches and my parents had been there to encourage me. So now that the opportunity has finally arrived, I want to make the most of it and do them proud by securing good results.

“If possible I would like to come back with a title.”

For Wyman, he is looking forward to putting a one-and-a-half year worth of high quality training to the test.

Wyman, who is also the world junior meet quarter-finalist, believes he has become a better player under the tutelage of Hendrawan and Datuk Tey Seu Bock.

“I used to be weak in attack. The coaches have pointed it out that I should add more power to my game,” said Wyman.

“I have been putting in a lot of hours to address the issue, but sadly there’s no tournament for me to assess how much I have improved.

“Now that I’ll finally get the chance to play in Europe, I hope to reach at least the semis in all the stops.

“I’ve set modest targets as although they are low-tier events, the players in Europe are very competitive as they have been actively competing.” 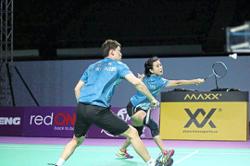