Lack of place to train a worrying factor for Soon Huat

PETALING JAYA: Fit-again independent shuttler Goh Soon Huat has been looking forward to the Korean Open from Aug 31-Sept 5 with enthusiasm but now, he is having a cold sweat.

Soon Huat and his partner Shevon Lai Jemie, who are ranked 13th in the world have not been doing on-court training since late May as their training centre in Sri Petaling can’t operate because of the National Recovery Plan (NRP).

On paper, the fourth seeds have a good chance to gain some valuable ranking points as they are in the race against time to prepare for their first World Tour outing since the All-England in March.

With the government now allowing non-contact sports to be played in states which are currently under the second and third phase of NRP, Soon Huat said he and the other independent shuttlers were considering options to train elsewhere.

“We need to act fast as we can’t be going to the Korea Open with zero preparation,” said Soon Huat.

“We’ve not trained for many months, it’s quite frustrating. We were even toying with the idea of training abroad, but it’s too costly.

“We are thinking of relocating to Perak temporarily. It’s quite a bit of a planning because we need to find a place to stay and train.

“Hopefully we’re able to get things sorted soon as we’re running out of time. We’re flying to Korea on Aug 25 because we will need to fulfil a five-day quarantine requirement prior to the tournament.”

Soon Huat added that they have submitted a request to Badminton Association of Malaysia (BAM) to train at the Academy Badminton Malaysia (ABM) but there had not been any positive response.

“Before the Olympics, we wrote to BAM but we have not received any feedback,” he said.

After a poor showing at the All-England in March, Soon Huat said they were determined to make amends.

The pair were eliminated in the first round by Ireland’s Sam Magee-Chloe Magee as Soon Huat was not in his best condition after sustaining a hamstring pull.

“I’m actually quite excited to return to competition. I have been spending a lot of time on my rehab since coming back from the All-England and I’m finally fit for competition again,” he said.

“The challenge now is lack of training. It’s really hard to stay motivated at this juncture. But like it or not, we have to overcome these challenges.” 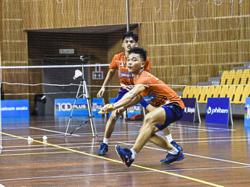