PETALING JAYA: Malaysia's challenge is all over at the All-England with the defeats of Lee Chong Wei (pic) and Goh V Shem-Tan Wee Kiong in the men's singles and doubles quarter-finals respectively.

The opening game was not as spectacular as one would have expected as Lin Dan and Chong Wei were sluggish.

The two-time Olympic champion Lin Dan upped the tempo as the game progressed and Chong Wei kept up with the pace until 16-16 before the Malaysian threw away easy points to hand over the first game on the platter.

But everything changed in the second game as the old foes raised the level of play by snapping at each others heels with longer rallies, stinging smashes, tricky shots, tighter netplays and steely determination.

Both locked horns until 13-13 but it was evident that Lin Dan was the better player when he showed more urgency and confidence to pull away with a commanding 21-17 win.

It was Lin Dan's 28th win in 40 matches against Chong Wei over a decade.

In the men's doubles, V Shem-Wee Kiong ran out of steam after a good start when they lost 20-22, 11-21 to veteran Mathias Boe-Carsten Mogensen of Denmark. 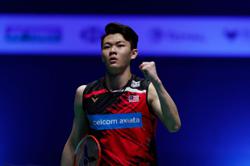