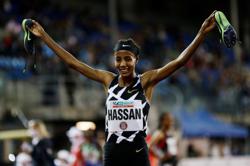 PETALING JAYA: The broader and deeper the base, the better it will be to produce new stars in athletics.

She pointed out that the athletics scene during her time and the present was different.

“We were brought up by clubs. I was part of the Panthers Athletics Club at the age of 14, and from there, I went from school, district, state and then national.

“So there were stages, and we trained with many athletes, ” said the 53-year-old.

“We lack that now. In the past, school sport was a highlight, but these days, it seems quiet, dead if I may add. For me, the root, which in this case the grassroots, is not strong enough.

“We do not seem to go through stages in terms of development. Something has to be done.”

After becoming a full-time housewife at 33, Josephine joined the Perak Sports Council in 2011.

She coached many athletes, including her daughters - Jocelyn and Shereen Samson Vallabouy, with Shereen still actively running and now being based in the United States.

In 2015, she was hired by the National Sports Council as the national elite coach and was on the job until 2019 but had to leave after being diagnosed with stage two breast cancer.

She said when she was coaching the athletes in Bukit Jalil, lots of athletes were prone to injuries.

“During my time, I competed for 10 years, never had major injuries, but we trained hard. Facilities weren’t in abundance, and we do not have regular access to stadiums, ” she said.

“If there were different levels of competitions from lower to the top, runners will have a better grasp of the basics and will be more experienced about how to take care of themselves.”