The story of a son of Malaysia It seems like we were more Malaysian in spirit before we officially became ‘Malaysia’.

ON the eve of the historic date marking the formation of Malaysia, I want to share the story of a man who, to me, was a quintessential example of that generation of Malaysians who grew up before Sept 16,1963.

This is history that today’s younger generation needs to know – and that older people need to be reminded of – because even as Malaysia crosses the sixth decade of existence, she is still tottering dangerously into racial and religious “conflicts”.

By the way, I find it curious that many public university academics would disagree with my use of the word “conflicts” here.

To them, if people are not being killed or buildings torched like during that horrible time on May 13,1969, there is no conflict at all.

To these academics, I say you are living in a fantasy world where there is no contextual historical precedents. Their measurement of conflict is clearly outdated.

My story today is about an architect of my acquaintance. To protect this man from being abused on social media – something that’s sadly very likely to happen nowadays – I will simply call him the Architect. I began interviewing him for a book I wanted to write about a national architectural identity – but his words pierced the very depths of my soul and set me on a different path of research.

During his younger days, the Architect would cycle to examine every nook and cranny of old Kuala Lumpur – that’s why he’s a walking archive of KL history, it’s architecture and social and economic history.

He recalled how he and his Chinese friends would share stories and plans for the future while visiting stalls, rivers, hills and villages in the Klang Valley.

He would often frequent the house of his Chinese friend and stay for a meal. The Architect smiled when he told me how, without him asking for it, his friend’s mother would buy nasi lemak or other Malay dishes so he could have halal food.

Nowadays, sadly, this seems to be taboo. I have had many Chinese friends over to my house for meals but I am still waiting for invitations from them to eat at their houses. My friends tell me that they are frightened of offending any Malay friends due to the halal issue. That they should be made to feel such fear does not bode well for this country.

Once, the Architect and a couple of his Chinese friends decided to build a makeshift raft to sail down a river.

When the Architect’s father got wind of this, he scolded all the children harshly.

A Malay father scolding Chinese children not his own? But the Architect said when the Chinese boys’ parents heard about the plan, they agreed with the scolding.

I was struck by the fact that members of this generation were so close that they looked out for each other’s children.

A child in any multiracial village then was a child of all the villagers irrespective of race, religion or

socioeconomic status. Unfortunately, we can only dream of such closeness now. We were more Malaysian in spirit before we officially became “Malaysia”!

The words that struck me most of all were these: the Architect said that to know who we are, we must know where and how we came to be. He said we must acknowledge the contribution of all the people who have crossed our path in life and how they affected us.

He spoke of non-Malay teachers who encouraged his artistic side – he won national art competitions at just 13 and 14.

He remembers the Sikh and Chinese “uncles” who helped him with Mara forms and applying for a scholarship to train as an architect overseas.

The Architect said that he would never forget all these people and their deeds however little they might have been because they all add to who he is now.

The lesson I learnt, the one that I want to share with the younger generation (and remind the older generation of) is that we Malaysians are where we are because of all those who, in the past, criss-crossed through our lives, regardless of race or religion.

I must also add a little about the Architect’s architectural life: To my mind, one of his greatest contributions to nation-building is his relentless fight to conserve the built heritage of Malaysia, especially in Kuala Lumpur. These buildings are monuments to our past as a nation and are physical reminders of the unique mix of cultures our nation boasts.

The Architect regaled me with a tale of how he convinced a certain young, idealistic guy called Dr Mahathir Mohamad to preserve several heritage buildings by using them for government functions instead of tearing them down and putting up characterless modern structures. It made both economic and historical sense, and Dr M agreed.

As we celebrate Malaysia’s formation tomorrow, I want to remind everyone that there are hundreds of stories like this that the younger generation hasn’t heard. Let us tell them now, about how lives once criss-crossed racial, religious and economic divides to form this blessed and beautiful country of ours. 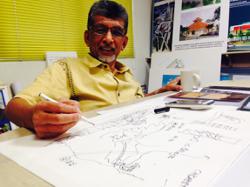