A Bahasa Malaysia for all

IT MAY seem strange to many that I wrote in English this article promoting Bahasa Malaysia. But I don’t find it strange. I did so because I do not want to be accused of being an Umno patriot, a cendekiawan Melayu (Malay intellectual) or even someone biased towards Bahasa Melayu because it’s his mother tongue.

In this article I wish to explain my history of teaching in Bahasa Malaysia, my concerns about the future of this language and how I think we should go about making Bahasa Malaysia the pride of Malaysians.

At first I grumbled and grudgingly taught the subjects for a year until I went to a conference on translation. At the conference, one British professor who spoke Bahasa Melayu with an Indonesian accent explained that all great civilisations achieved huge advancements in scientific and philosophic thoughts in their own languages. This was how Japan, China and Korea vastly improved their technological and economic prowess.

I left the conference with a new sense of purpose and zeal and commenced my writing, which has continued until today. I promised myself that I would transfer everything I knew about architecture into Bahasa Malaysia.

I was not convinced that we needed other people to acknowledge that we were good. I read Professor Sham Sani’s professorial lecture on internationalisation, where he said, being internationally acclaimed means that other people want to know what you have that is valuable to all of mankind.

They don’t care which language you use to phrase the construct of that knowledge. I decided to go against the university directive and lectured in Bahasa Malaysia and graded assignments in the same language.

One day, I walked into my undergraduate class and found a student from Yemen and another from Iran. The university had started recruiting foreign students for our undergraduate intake apparently because having such students was an important criterion for being ‘international’.

I had no choice but to switch to teaching in English.

From then on, things went downhill for Bahasa Malaysia. The university revealed that promotion relies heavily on work that is published in international high-impact journals. Journal and book publication in Bahasa Malaysia suffered a huge setback.

All our universities were in English mode because of their focus on rankings and internationalisation. I have never agreed with and will never support the idea of university rankings as a measure of excellence.

To me, knowledge is always about creating a new culture of understanding within the immediate community where one’s knowledge was generated. If the generation of knowledge does not go hand in hand with the production of an enlightened citizenry and a sustainable economic and health environment, I consider this an indication that the universities are not performing well.

Churning out millions of graduates to fit in the workforce is not a real measure of a university. Universities are about ideas, innovations, effective communication and building societies.

If education was to serve only professors, academics and vice-chancellors so that they get overseas trips and fat salaries, the purpose of the university as an agent of social change would be defeated.

One academic pointed out that we are seeing rising religious intolerance among Malays because Bahasa Malaysia has a diminishing role in knowledge constructs. Concepts of democracy, liberalism, pluralism and progressive ideas are now left to clerics who paint a negative construct for all these civilisational ideas.

That is why the racial and religious tension we experience today ominously resembles that of the 1960s. We have not progressed!

To forge ahead and shift our national narrative towards a more harmonious and progressive Malaysia, Bahasa Malaysia must make a comeback.

When I read Hikayat Abdullah and Hikayat Hang Tuah, I was fascinated by Kassim Ahmad’s analysis of the myriad of words and terms that came from nine different civilisations. Most of the Malay words we know come from Indian, Chinese, Arabic, Javanese and Sanskrit. There were those adapted from Portuguese.

Now, Bahasa Malaysia is invaded mainly by English terms. I think that in order for Malaysians to be proud of Bahasa Malaysia, it needs to return to adapting words from the other 38 ethnic groups in our country.

Instead of just choosing English terms, why can’t some of the terms related to social, religious and everyday objects adapt and adopt our ethnic languages in Sabah, Sarawak and the peninsula? That way, we acknowledge the importance of all our ethnic groups.

Another way to enhance Bahasa Malaysia as a language of pride is to allow and encourage its use in discourses, forums and discussions in private universities. These institutions need to look at the important role of memartabatkan (upholding) Bahasa Malaysia by allowing Masters and PhD theses to be written in that language. After all, we have more than enough Malaysian academics raised with Bahasa Malaysia to read and evaluate these academic works.

Internationalisation or being world-class does not mean that we abandon Bahasa Malaysia.

First of all, the priority of the university is to educate the people in the country so that they are aware of new developments and concerns such as concepts of liberty, plurality and a spiritual universal construct that can be shared in a language that all the citizens are proud of. The way forward for our beloved nation must include a progressive Bahasa Malaysia for all. 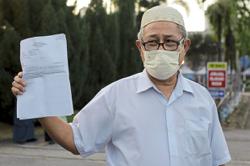