All you need is kindness

Instead of pointing fingers and playing the blame game, why not provide support and be part of the solution to the world’s problems?

IT seems like just yesterday, but it was one year ago that I debuted the #bringbackthekebaya movement. The event was bittersweet for me, as days after the event The Star lost one of its icons, Soo Ewe Jin.

I can still remember the conversation we had in the chemotherapy ward when I last saw Ewe Jin. We touched on persistence in overcoming challenges, having faith in humanity, and the need to extend kindness.

I find it serendipitous that one year on, 8,000 miles away from home, I was again reminded of the same themes at the recently concluded annual Women of the Future (WOF) event. In the three days dubbed “Week of Women”, women from 35 countries gathered in London to inspire and be inspired.

We engaged with high-flying corporate figures that included Malaysia’s own Astro Group chief executive officer Datuk Rohana Rozhan, government officials and high school students. From the inspirational sharing sessions, I felt empowered to “ask for the big job” and to pave my own way career-wise.

I was equally inspired by the youths. Many of the young women I talked to during the event divide their time between studies and volunteer work in causes that include global development, improving gender equality and overcoming poverty.

When I was their age, I was solely focused on getting As in my SPM. Today, youths are not only disrupting the traditional career tracks that we all know and creating their own jobs, some of which may not even be invented yet; they are also empowered with the desire to be part of the solution to the world’s problems.

Yet the world is still a hard, patriarchal place. It seems that for every step forward in gender equality, we are taking two steps back, a point emphasised by Sophie, Countess of Wessex, who is the WOF Global Ambassador.

It’s 2017, but there are still 130 million girls between the age of 6 and 17 who are out of school according to Unesco estimates. Women today face the same historical challenges of intimate partner violence, child marriage, institutional sexism and inequality when it comes to access to education, and economic and political share of power.

Overcoming these challenges daily can bring out the worst traits in human beings. Being competitive and striving for success, while positive traits, can turn into negative traits when applied with malice.

The challenge actually lies in finding the right balance between having the drive for success and the humility to make mistakes. It was refreshing to have the speakers at the WOF event sharing the low points of their lives, describing these as the drivers of their successes.

Further, there was an emphasis on “the need for kindness” as aptly put by WOF’s founder, Pinky Lilani. In her speech at the launch of this year’s Week of Women that coincided with World Kindness Day, she shared how the simplest of acts such as giving chocolate to a kid who needs it can have a big, empowering impact.

Acts of kindness are not limited to charity or voluntary work. Simply listening to another’s grievances, providing words of encouragement, or telling another person that “I care”, are acts of kindness, too.

Following the recent Penang floods, my new friends in Oxford made it a point to ask about my family back home. My friends in Malaysia then went above and beyond by galvanising volunteers to provide cooked meals and assistance in cleaning up post-flood; actions that can only be summed up as a “flood of kindness” in itself.

I learnt that instead of pointing fingers and playing the blame game, it is better to provide support and review solutions. In the case of the recent landslide and floods in Penang, there is a need to review and implement stricter environmental impact assessments on current and future developments to prevent such tragedies from recurring.

There is a need for innovation in the form of a flood alert, efficient emergency response when a natural disaster occurs and options for purchasing insurance to mitigate the financial loss following such disasters. There is a need for collective responsibility, from the smallest acts of not littering, as litter could block drains, to changing policies that ensure development and urbanisation efforts would have minimal impact on the natural environment.

All of those dry policy aspects aside, the core moral value behind these actions is kindness. Having kindness at the core of policymaking alongside making rational decisions, backing policies with data, and ensuring social justice could result in that close-to-ideal society we want to live in.

It is kindness shown by others that has continued to empower those affected by any tragedy – be it personal, health issues or natural disaster – to overcome their challenges, and in turn extend kindness to others. Ewe Jin’s insistence on providing support to other cancer patients while battling cancer himself is an extraordinary act of kindness.

It is a legacy I am honoured to uphold. 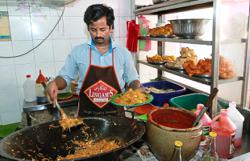