Recording raptors: In this file photo, a geological researcher is measuring the Kayentapus footprints in south-west China’s Chongqing Municipality. — Xinhua

His fondness for the prehistoric animals has actually led to a huge discovery for Chinese palaeontology.

The kindergarten student found the first dinosaur footprint in the northern edge of the Sichuan Basin.

Yang is also the youngest Chinese to discover traces of the gigantic animal that once ruled the world.

During a recent holiday in his hometown in Tongjiang country in Sichuan province, his grandfather mentioned about strange footprints near Mount Jiziding (literally translated as “Chicken Top”).

His story got Yang’s attention and he asked his parents to take him there.

Led by his grandfather, it did not take them long to find the location, though the place was covered with moss, undergrowth and soil.

After cleaning up, they saw the footprints on a huge slab of rock.

The boy immediately identified the prints belonging to a theropod dinosaur – a two-legged dinosaur with three-toed limbs and hollow bones such as the famous Tyrannosaurus rex.

He asked his mother to contact the China University of Geosciences associate professor Dr Xing Lida, who wrote books and produced educational video programmes about dinosaurs for children.

Yang had read and watched some of his works.

The mother took some photographs and sent them to Dr Xing, who went to inspect the site with a team of palaeontologists including experts from Zigong Dinosaur Museum on Oct 10.

Experts later announced that they had discovered a collection of five footprints, the length of about 35cm each on the 20 sq m rock.

They believe the footprints were left by small-and medium-sized carnivorous dinosaurs from the Early Cretaceous period, some 130 million years ago.

The experts also estimated that the dinosaur was about 4m-long, based on the size and the distance between each footprint as well as other evidence.

This is the first trace of dinosaur activity discovered in the northern edge of the Sichuan Basin, making significant progress in their studies about the extinct creature.

“This confirmed there were dinosaurs here over 100 million years ago,” Dr Xing pointed out.

In fact, the local villagers spotted the footprints a long time ago but none had linked them to prehistoric life.

They were merely following and passing down their ancestors’ stories about the “chicken footprints”.

Asked by the local media why he was so sure that the marks were made by a dinosaur, Yang gave a simple and direct answer.

“Only dinosaurs have such huge footprints,” he said.

Netizens were thrilled, not so much about the new discovery, but about the five-year-old boy.

News about little Yang was read 270 million times on Sina Weibo, China’s Twitter equivalent, and generated 13,000 discussions in one day.

“He is brilliant, only five and could tell the category of the dinosaur,” wrote one of the uncountable online users who praised the boy.

Sichuan is not new to dinosaur findings.

With the excavation of fossils belonging to 28 species, it is ranked second among Chinese provinces with the most dinosaur species discovered, after Liaoning in the north-eastern region.

In fact, the province’s popular Zigong Dinosaur Museum is built on the famous Dashanpu Dinosaur Fossils Group site, known as a mass grave of dinosaurs.

The site has yielded the world’s largest collection of fossils from the mid-Jurassic Period (176 to 161 million years ago).

Last year, a rock climber stumbled onto huge fossilised footprints in a forest park of Chongqing municipality, which was once a city of Sichuan.

Palaeontology experts identified the tracks as belonging to large and medium-sized Kayentapus, a theropod dinosaur dating back to the early Jurassic period about 190 million years ago.

Scientists revealed that the tracks were formed by 46 footprints, an indication that a group of the dinosaurs was moving at a trot.

According to China’s national news agency Xinhua, the findings were presented in an online article published by the British Journal of Historical Biology in late May.

Co-author Dai Hui, an engineer with the Chongqing 208 Academy for Geological Heritage Protection, said the footprints of Kayentapus were distributed globally.

In North America, they were made by Dilophosaurus, one of the first large flesh-eating dinosaurs during the early Jurassic period and also a favourite of Hollywood filmmakers.

The Chinese variety had two crowns on its head, with a body length of about 5.6m and a weight of up to 500kg.

It was a fierce, large dinosaur. 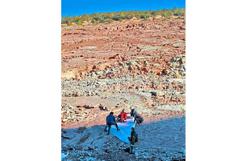 All quiet in the kampung
Down the drain for their ‘idol’
Thinning hair and an inability to rise to the occasion Premium
In the spirit of the season, act together to curb virus
‘Big brother’ politics
We can run...
Shockwaves from former IGP's explosive farewell Premium
Hands off, politicians
Reflections on the AstraZeneca opt-in exercise
Democracy should include youth