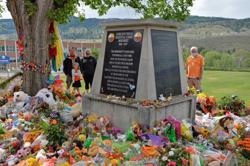 It is a week-long holiday for the Chinese for the mid-autumn festival and national day celebration but with Covid-19 still a threat, many are still cautious.

AFTER the Covid-19 pandemic early this year, the Chinese are enjoying themselves and being happy again. They are celebrating not one but two events.

On top of this, they will also be enjoying a week-long break, dubbed as one of the two “golden holidays” in China.

This year the Zhongqiu Jie (Mid-Autumn Festival), celebrated on the 15th day of the eighth lunar month, fell on Oct 1 which coincided with the country celebrating its 71st birthday.

The other long holiday that the Chinese look forward to is the Chinese New Year but there was hardly any reason to be happy as the pandemic was at its height in the country earlier this year.

It is a rare occasion to see double festivals in the country, with the last time being in 2001.

Apart from the Spring Festival, which is known as Chinese New Year worldwide, the Mid-Autumn Festival is one of the two traditional festivities listed as official public holidays in China.

The other is Duan Wu Jie (Dragon Boat Festival), which falls in the fifth month of the lunar calendar.

Mooncake is a must eat food on Zhongqiu.

Apart from the ones we usually eat in Malaysia, which are filled with an assortment of nuts, fruits, black sesame, lotus or red bean paste, there are two types of traditional mooncakes in Beijing – the zilaibai (white) and zilaihong (red).

These two are round in shape and usually the fillings are melon seeds, osmanthus flower, raisins, dried fruit skins as well as walnut, jujube and hawthorn puree, depending on individual baker.

Both are very sweet and taste like the wu ren (nutty) mooncake we find in Malaysia.

These mooncakes are said to be offerings to Tu’er Ye, the Rabbit God who is making medicine at the moon palace.

According to folklore, there are three characters on the moon: Chang’er, the pretty goddess who sought refuge there after drinking the immortal potion belonging to her archer husband Hou Yi, who saved the Earth after shooting down nine suns, the other two are Wu Gang, who was punished for chopping down a self-healing osmanthus tree for a mistake he made while practising to become a god, and the Rabbit God.

It was said that a long time ago, Beijing was hit by a pandemic that killed a lot of people.

Chang’er, who saw the tragedy and could not bear to hear the cries from the people, sent the rabbit to help the Beijingers.

The rabbit brought two types of medicated tablets, one in red for the men and one in white for the women.

To show their gratitude, the clay statue of the Rabbit God was made and they worship it. It is called Tu’er Ye (literally translated as Sir Rabbit).

The Beijingers also made white and red mooncakes that resembled the life-saving tablets as offerings.

Tu’er Ye – which has a rabbit head and human body – is a popular Beijing symbol which can be seen at most souvenir shops, tourists’ sites and shopping streets in the city.

It comes in various shapes, wearing an armour or riding on a tiger, lion, deer or other ferocious animals to distribute the medicine around the town.

As tradition, the Tu’er Ye toy is also given to children in the hope that they would be protected by the god.

Life in Beijing has basically returned to normal.

But it is still too early to declare victory against the new virus in view of rising cases globally.

The Chinese government is not taking any risk.

Each province has come out with its own measures on the control and prevention of Covid-19 during this long break.

Beijing schools have banned teachers and administrative staff from leaving the city while advising parents not to take their children out of its border.

Some universities have shortened the holiday period from the official eight days to either three or four days, or prohibited students from leaving the campus.

With all these measures in place, if you think the highways and tourists’ spots will be clear, you are wrong.

The highways leading out of the Chinese capital, and those in many provinces including Zhejiang, Guangdong and Hubei, have been at a standstill since last Thursday.

According to video clips and photographs uploaded by motorists on social media platforms, there were travellers who got out of the vehicles to practise taichi on the road or fish from the highway bridge.

A netizen said it took him more than 10 hours on a journey which usually would have taken less than three hours.

According to chinanews.com, the country received almost 100 million local tourists on the first day of the long holiday.

Based on the figure, the inbound tourism industry has recovered by nearly 75%, said the Chinese Culture and Tourism Ministry.