JOHANNESBURG, Oct. 5 (Xinhua) -- Eskom, South Africa's national power company, announced Wednesday afternoon that the stage 4 load shedding would continue to be implemented until 05:00 on Thursday morning, and then be reduced to stage 3 until 05:00 on Saturday.

Although renewable energy has been proposed as a remedy for the country's energy shortage during the summit held from Oct. 4-5, an energy expert told Xinhua that it was not the ideal kind of alternative for the nation's deep-level mines and other economic sectors requiring intense energy.

Some industries in South Africa have blamed their poor performance in recent economic data releases on the frequent blackouts and believed the country's economy will continue to decline until the power cut problem is resolved.

The embattled tourism sector hopes for a bumper summer season, the first in two years without pandemic-induced restrictions. But the scourge of load shedding and capacity constraints among local airlines dampen the expectations.

Although most international travel restrictions have eased and airlines are slowly returning to the skies at frequencies last seen in 2019, South Africa faces a set of specific challenges in luring tourists back.

Tourism insiders believe that the energy crisis is also having a negative impact on tourism and hospitality businesses. "When looking at the recovery of the industry across the continent, load shedding is placing an additional burden on South Africa's ability to recover at the same rate," Daniel Trappler, senior director of development for Southern Africa at the Radisson Hotel Group said recently at the Africa Property Investment Hospitality Forum.

"Diminishing lights and flights" are having a negative impact on South Africa, complained Trappler.

Domestic travel, which was the only ray of light for South Africa's struggling tourism sector during the period of heightened international travel bans, is likely to suffer most from the rising costs of local flights and load shedding's economic knock-on.

The FNB head of Trade- Structured Trade and Commodity Finance, Bobby Madhav, said the trade surplus was lower than the expected 1.4 billion dollars. He believed that the current load shedding would negatively affect trade prospects in the next coming months. He said load shedding affects manufacturers and miners who are struggling to maintain their production targets.

People in South Africa are also struggling with power cuts. The load shedding has a strong impact on the provision of health care services across the country. The Health Professions Council of South Africa last week made a call saying load shedding is putting the lives of patients at risk.

Although the Minister of Health Joe Phaahla himself is engaging relevant stakeholders for the healthcare facilities to be exempt from load shedding, the results were not satisfactory.

City Power said the department of health approached them to exempt 130 healthcare centers from load shedding because of the critical nature of their jobs. "From the list we received there are over 130 health facilities including clinics and hospitals within the City of Johannesburg. On that list, and based on the assessments of our network, we are only able to exempt about 10 facilities, for now, in our supply network," said City Power spokesperson Isaac Mangena.

He said they are committed to ensuring that there is minimal disruption to healthcare centers but it is difficult to exclude them all.

"The reason is because of our network configurations and the fact that most of these facilities are embedded within the network blocks, and we have limited resources that could be used to operate, often physically, during load shedding," Mangena said.

Energy analyst Chris Yelland has warned that the situation could get worse if nothing was done. "This year we got stage 6 and it could be higher if we do not do something about it."

Eskom would be obliged to impose stage 8, the highest level of load shedding, if it continued to encounter problems, he said, and warned "South Africa's grid will collapse." 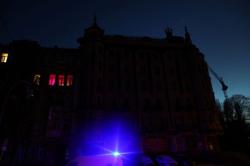