By Gwladys Fouche and Pavel Polityuk OSLO/KYIV (Reuters) - This year's Nobel Peace Prize could condemn the war in Ukraine by recognising opponents of Russian President Vladimir Putin, the volunteers who have helped civilians, or Ukrainian President Volodymyr Zelenskiy, who ranks high on bookmakers' lists.

Or it could highlight climate change and recognise an environmental campaigner like Greta Thunberg - or go for a complete surprise, as the Norwegian Nobel Committee has done before.

The Kyiv Independent newspaper and Zelenskiy are currently favourites to be named Nobel Peace Prize laureates on Oct. 7, according to bookmakers, joining the likes of Nelson Mandela, Jimmy Carter, Mikhail Gorbachev and Andrei Sakharov.

"It could be a prize either for actors internally in Ukraine - fact-finding, humanitarian assistance," Henrik Urdal, director of the Peace Research Institute Oslo, told Reuters.

"It could also be a prize to opposition figures in neighbouring countries," he said, citing Sviatlana Tsikhanouskaya of Belarus and Russia's Alexei Navalny, currently in jail.

"Both have been critical of Russia's actions in Ukraine and both have been strong proponents of democracy and non-violence in their home countries."

Tsikhanouskaya and Navalny are both nominated for this year's prize, according to a Reuters survey of Norwegian lawmakers who have a track record of picking the eventual laureate.

Thousands of people can propose names, including former laureates, members of parliaments and university professors of history or law. Nominations are secret for 50 years but those who nominate can choose to reveal their choices.

Last year, journalists Maria Ressa and Dmitry Muratov, who braved the wrath of the leaders of the Philippines and Russia to expose corruption and misrule, won the peace prize, in an endorsement of free speech under fire worldwide.

In Kyiv, an adviser to Zelenskiy told Reuters a prize for the president would recognise he "took full responsibility at the most dangerous moment".

It would also be a prize for "the Ukrainian people, who today pay the highest price for the right to live without war", Mykhailo Podolyak told Reuters.

Ivan Bezdudnyi, a Kyiv resident born in the eastern city of Mariupol, said a Nobel Prize focused on Ukraine would "once again demonstrate the world's support".

"For the Ukrainian people, it would signal that we are doing (the) right thing, that we are on the right path and have to fight until the end," the 24-year-old teacher said.

Still, Urdal said the awards body would be "careful" about recognising a leader of a state involved in war, even though Ukraine did not instigate it, as a party in an armed conflict "is always involved in activities that are problematic".

Russia calls the war in Ukraine a "special military operation" to demilitarise its neighbour. Ukraine and Western nations have dismissed this as a baseless pretext for aggression.

The Nobel body may also want to put the spotlight on the world's "other existential threat", climate change, said Dan Smith, head of the Stockholm International Peace Research Institute.

"You could put together a coalition receiving the Nobel Peace Prize," he said.

Thunberg, British nature broadcaster David Attenborough, Tuvalu's foreign minister Simon Kofe and the Fridays for Future group are all nominated for this year's peace prize, according to the Reuters survey.

Other potential laureates include an international organisation like the UN refugee agency (UNHCR), its children's fund, UNICEF, the International Committee of the Red Cross (ICRC) or the World Health Organization (WHO).

(Reporting by Gwladys Fouche in Oslo and Pavel Polityuk in Kyiv; Editing by Nick Macfie) 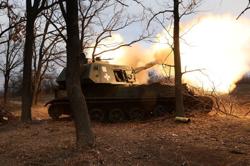